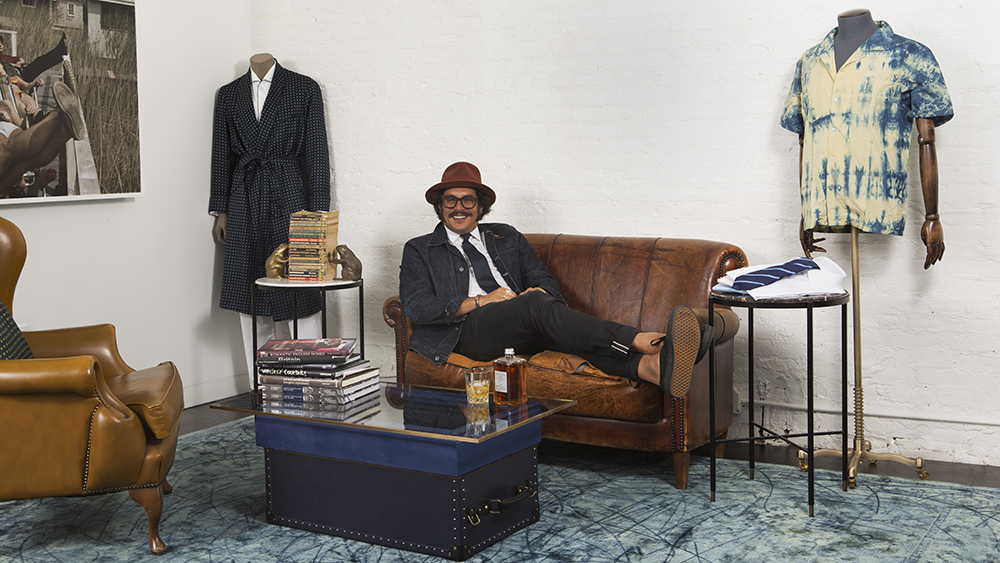 Since its establishment in 1885, British shirtmaker Turnbull & Asser has become known worldwide—the patronage of Prince Charles and many a James Bond incarnation hasn’t hurt in that regard. Under co-owner James Fayed, the appeal has only broadened. Alongside his father and two brothers, he’s made T&A as relevant to a younger audience that craves tie-dye or silk shirts as to those who stock up on bespoke business shirts by the dozen. Even though he’s the face of a renowned luxury brand, Fayed is not much for formality—his business cards are without a proper title, his wardrobe a distinct blend of vintage finds. Even his New York office bucks tradition, adorned with taxidermy, neon and the many irreverent photos he’s snapped throughout his travels. From his gallery at the top of the Turnbull Townhouse in New York, the raconteur shares with us his many passions, from fishing and motorcycles to all things analog.

I’ve been deep-sea fishing all my life, but I recently went to Block Island and jigged my first striped bass.

I’ve just acquired a 10-foot stuffed Kodiak bear for my taxidermy collection. I bought it from a lot, from a gentleman who ran a National Geographic museum. Right now it’s in my garage in Westchester.

My family. My son, Leo, is five years old, and he’s the most amazing little creature in the world. I love coming home to him at the end of the day.

I’d like to learn how to be a motorcycle or car mechanic. I hope to God I get reincarnated as a grease monkey.

If you could stick at one age, what would it be and why?

The age I am now: 40. You have a strong foundation and experience in business, in family and in life.

What do you still do that’s analog?

I listen to a lot of vinyl, and I have a really big collection of reel-to-reel tape recordings. I also shoot and develop my own film. I try to be as analog as I can.

How would you describe your look? How would others?

Eclectic. Unexpected. People expect a three-piece suit, that kind of thing—which I used to do, back in the day. But I’m a lot more comfortable now. I’ve found a groove. I still dress up from time to time.

Do you have a particular hotel that you return to?

Hotel Splendido in Portofino. I’ve been there a couple of times. It’s cool, very old school.

And a restaurant you’re into right now?

There are a few, but one I love in particular is 4 Charles Prime Rib in Manhattan. It’s really low-key—there are maybe 15 tables in the place. Great basement vibe, wine list and fantastic food.

What’s the most recent thing you regret not buying?

Shares in Juul. My brothers and I all had the opportunity to invest.

What car are you most attached to?

My 1962 Chevy Impala. Motorcycle-wise, I have a ’99 Sportster 1200. I bought that on eBay and drove all the way to Indianapolis to pick it up. That I could never, ever sell. I love that bike.

Who’s your dealer and what do they source for you?

Mister Freedom. He has an amazing collection of vintage clothes, and they do great reproductions as well.

I write thank-you notes. My mom taught that to me growing up, and I do it with my son now all the time.

Who do you admire most?

My father. He’s someone who’s obviously been involved in the business for a long time. And Hunter S. Thompson, someone who I obviously don’t know. I have a great love for him because he lived by his own rules, kept his head down and just did his thing.

Last piece of advice you gave someone?

Live life to the fullest.

Favorite seat on a plane?

Vacation with friends and family. I was just in Italy with my brothers—we’re all very tight.

I drink a can of Sencha green tea in the shower.

Enjoying things. Being happy with where you’re at.

When was the last time you unplugged?

Every weekend I go out of my way to unplug, especially from my phone.