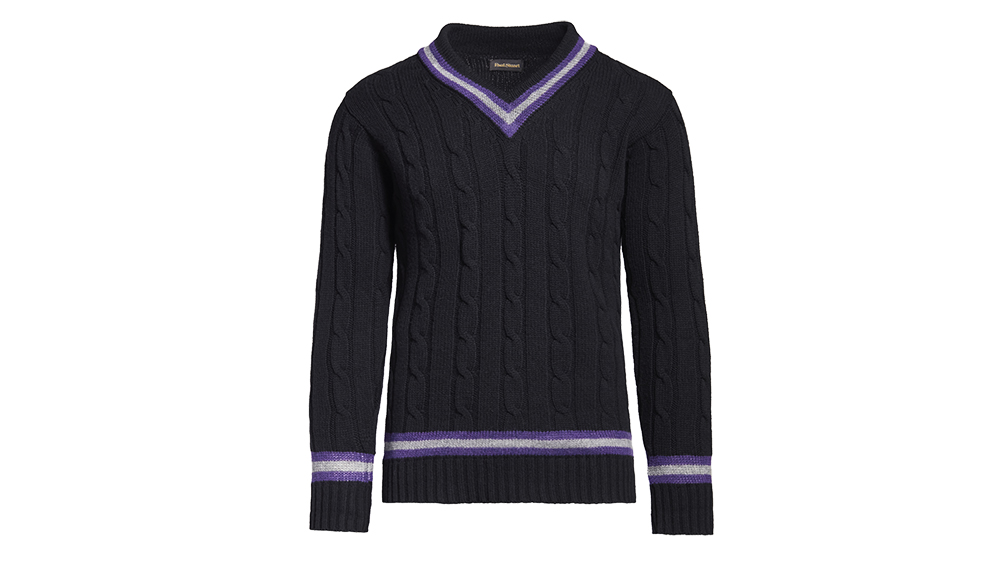 In recent years, athletic attire has been an albatross hung around the neck of menswear. The trend has yielded numerous cringeworthy developments: suits with elasticized cuffs, haute fanny packs and all manner of outlandishly proportioned (and aggressively ugly) sneakers. But lately, designers from Angela Missoni to Brunello Cucinelli have recalled athletes of yore, in the process resurrecting two bygone sportswear staples with enduring appeal: varsity and tennis sweaters. Steeped in clubby, Ivy League rakishness, they evoke a time when the sporting life was not antithetical to style but synonymous with it.

The garments date to around the late 19th century, when they served as actual sporting uniforms for athletes. The varsity sweater, marked by a crewneck or boatneck and a letter or number on the chest, originated with Harvard’s baseball team, in 1865. The letter—which represented one’s school or team affiliation—would historically be accented with stripes on the sleeve to commemorate standout performances and, for team captains, a star to denote rank. Cricket or tennis sweaters, defined by a V-neck and stripes along the collar and hems, were popularized by British cricket clubs and quickly adopted by tennis players and golfers on both sides of the Atlantic.

“Varsity sweaters are ‘jock’ personified—they feel very butch, very athletic, very masculine,” says Brooklyn-based vintage-menswear dealer Sean Crowley, who stocks dozens of both styles from the 1920s through the ’60s. “I don’t know if it’s because of the Britishness of them, but tennis sweaters have a slightly more bookish quality. If the varsity sweater is American, the tennis sweater is English.”

Whereas the originals were built for durability on the field, the latest generation of sport sweaters take their predecessors’ motifs and trim silhouettes and render them in deeply luxurious materials—more “captain of industry” than captain of the football team. Brunello Cucinelli and Ralph Lauren riff on classic tennis cardigans in downy cashmere and wool blends, while Paul Stuart and Missoni take on the traditional V-neck, with Missoni swapping the standard cable knit for the graphic kick of its signature jacquards. Italian indie knitwear brand Alanui gives the varsity sweater a fresh spin as a plush cashmere cardigan with collegiate stripes and charmingly nostalgic embroidery.

“For us in the UK, the varsity sweater was never part of our school sports kit, so it has different connotations,” says Drake’s creative director, Michael Hill, whose cashmere letterman sweaters come emblazoned with a bold “D” in intarsia knit. “It is perhaps free of the baggage that may be attendant for our friends across the pond.”

Regardless of whether you made varsity in your school days, the sweaters offer a subtle irreverence that suits men of all ages. Crowley is partial to the 1930s styling of a sport sweater atop a collared shirt, with the collar’s points draped over the neckline. Or “wear it as you would any other stylish piece of knitwear,” Hill says. “It goes beautifully with a tweed jacket and cords, and equally well with jeans and a field jacket. Don’t overthink it. Their beauty is in their simplicity.”