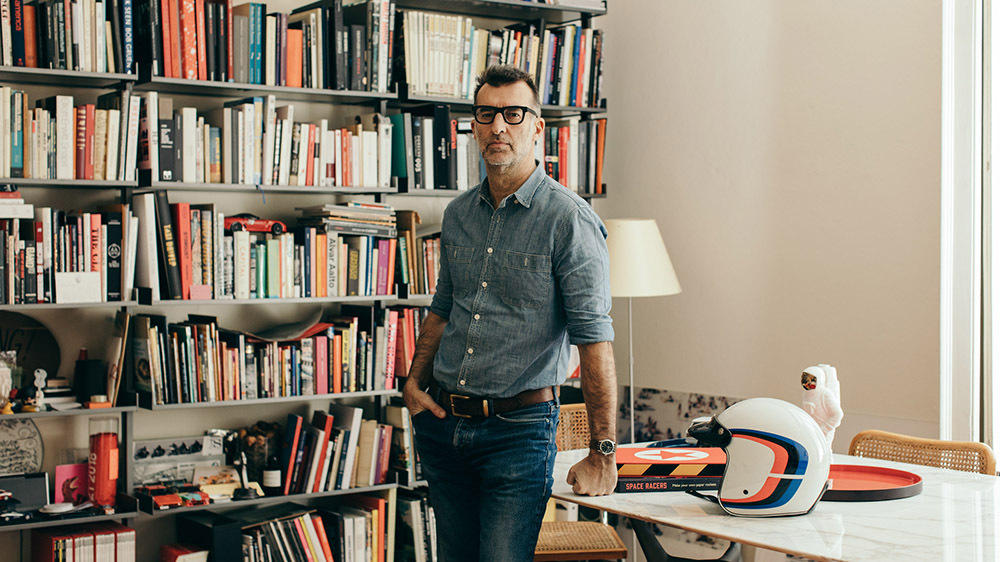 Late last year, Michele Lupi—the longtime editor of magazines such as GQ Italia, and Rolling Stone Italia—quit his desk job to become a visionary. Believe it or not, the title is legit: Fashion label Tod’s created the position of Men’s Collections Visionary specifically for him, as he helps develop the group’s new Tod’s Factory project. For Lupi, a man of taste in everything from the cars he drives to the denim he wears, the title was half the allure. “It is a strange position, but I am always open to trying new things— even trying out a new life at 53 years old,” he says. Robb Report caught up with the stylish Italian in the first days of his new gig to talk vintage watches, analog phones, and the arrival of the “Shoeker.”

I had my first pair of custom Italian craftsman shoes made. I just started working at Tod’s, so the first thing that I did was have a pair of shoes made by them. They are called Shoekers—a merge between a classic shoe and a sneaker. I have a lot of shoes, and usually I am more into British and American classics like Alden or Church’s, or original Jordans, but I think the Shoeker is really interesting. It’s a new way in footwear that fuses Italian craftsmanship with the world of sneakers.

I’m a really big fan of analog. Digital is so perfect, it becomes annoying. It’s important to use technology in a way that doesn’t destroy your life. So I carry a Punkt phone, which only does phone calls and text messages. I went to the Punkt offices a week ago—they are based in Switzerland—and they told me they are finding their biggest market is in Silicon Valley.

Yes. For most of the year I’m dressed exactly the same. I wear a chambray shirt with a navy-blue V-neck cashmere sweater; Lot No. 1 Levi’s, which are made-to-measure jeans; blue socks; and an old pair of Alden shoes.

My blue 1981 Mercedes 280TE. It is my second Mercedes; my first was a red 300TD, which is diesel, so I needed one that takes gasoline. The 280TE is very difficult to buy in Europe. It’s not a really expensive car, but it’s a classic. I think it’s one of the last beautifully designed cars of the ’70s and ’80s.

A Porsche 912. It’s called “the poor man’s Porsche” because it was the slowest one, but it’s also the sleekest. It’s like a 911 but simpler and, technically, it has a smaller engine. It’s not usually considered much by collectors because they tend to prefer the fastest and most expensive cars. But for me, it’s not about owning the most expensive thing; it’s about owning the real thing. This car is for people who know.

What are your three favorite stores?

There is a beautiful bookstore in London called Daunt Books that is filled with books about adventures and travel. There’s another shop in London that’s called Arthur Beale that’s really great. It’s a 400-year-old ship chandler that sells ropes and other supplies for adventures and expeditions. And in Amsterdam, there’s a store called Gastronomie Nostalgie that has everything for the kitchen and home.

How many watches do you own?

I also have a 1965 Rolex Explorer because I like the story behind that watch and the idea that it was made the year I was born. And my third watch is a rare chronograph, a Heuer Autavia Andretti. In the ’80s, I bought it from a vintage shop for $200. Now its price has gone crazy—almost as much as a Rolex Daytona. It’s really old and scratched, and I like it for that reason.

A point of balance between Milan and Wyoming.

Yes, always with F. Pettinaroli, a classic stationery made by an old shop in Milan. It’s quite expensive but beautiful.

Mostly Bowie, but I have to admit that Dylan is incredible. You don’t have to like his music, but you cannot deny that he is a cultural giant of the 20th century.