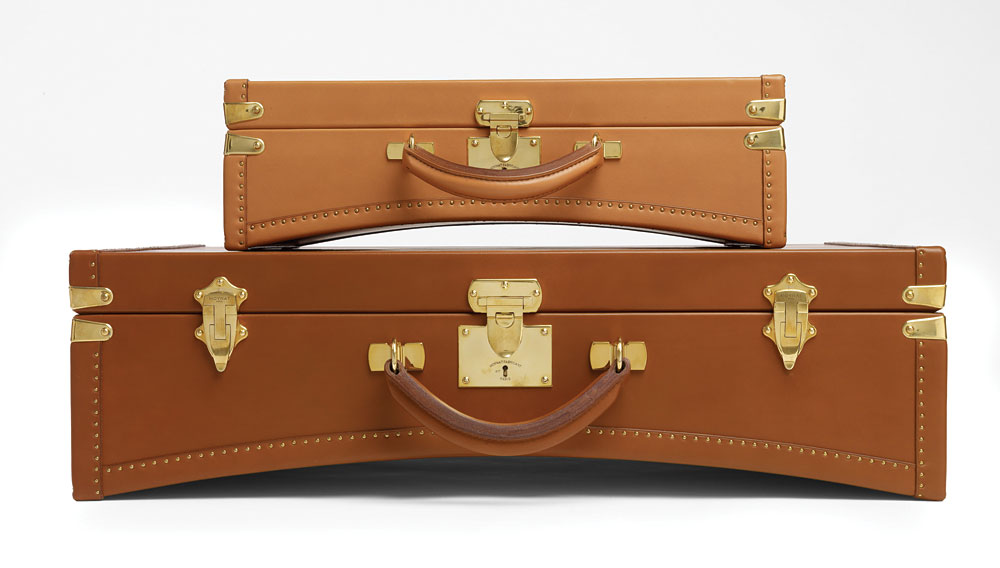 At the beginning of the 20th century, the maker of the most stylish and practical custom luggage in Paris was not Louis Vuitton or Goyard, but Pauline Moynat. The only prominent female practitioner of the era, Moynat created distinctively curvaceous bags and witty conceptual pieces, such as a round trunk designed to hold a spare tire that could also, in a pinch, be filled with water to serve as a bathtub. She founded her business, Moynat, in 1849, and by 1854 she owned the patent for canvas coated with gutta-percha, a natural tropical latex that guaranteed a watertight finish. She developed the first frame trunk made of lightweight wicker covered with watertight canvas, and when motorcars became a staple of modern life, she adapted her designs to suit them, making custom luggage that matched the exteriors of Bugattis, Binders, Voisins, Labourdettes, and other marques. In 1902 she received five patents for her signature piece of luggage, the Limousine trunk, which featured a curved bottom that fit snugly onto the rounded roof of a car.

But for all her technical accomplishments—and the aesthetic appeal of her designs—Moynat gradually faded into obscurity, and the brand’s single Parisian shop finally closed in 1976. Fortunately, Moynat’s legacy captured the interest of Bernard Arnault several years ago. A master at reviving storied brands, the chairman and CEO of LVMH Moët Hennessy–Louis Vuitton purchased Moynat through Groupe Arnault, his private holding company, and set out to restore its grandeur for a new generation of travelers. Nearly four years later, the Moynat name once again rejoins the exclusive ranks of fashion, appearing on the fronts of boutiques in Paris and London that stock its full range of handbags, small leather goods, and luggage. Yet unlike most leather-goods producers, Moynat’s hallmark is not a logo; instead, it is the streamlined, slightly curvaceous shape and simplicity of its designs, which once again set the standard of style among today’s travelers.

The first challenge in authentically resuscitating Moynat was assembling an archive of the company’s original trunks, which would serve as the inspiration for future pieces. After the closure of the shop, no such collection existed. Under the supervision of the chief executive Guillaume Davin and the creative director Ramesh Nair, bags and trunks were purchased across Europe from antiques dealers and at vintage-car rallies, where some old automobiles could be found with made-to-order Moynat luggage that, after more than a century, was still in excellent condition. The collection, which numbers about 150 pieces, is displayed at the brand’s boutiques and in Moynat’s Paris offices. Among the more interesting finds are a 1929 leather trunk once owned by Juan Bautista Pérez, the president of Venezuela, who covered it with stickers touting his extensive travels, and a 1925 red Moroccan-leather trunk decorated with a frieze of studs that earned a grand prize at the International Exhibition of Modern Decorative and Industrial Arts in Paris.

In the era when a trip across the Atlantic via steamship often took weeks, the concept of ordering bespoke trunks that required months to complete was unremarkable; today, however, such consumer patience is in short supply, except perhaps among those who truly admire that level of quality work. Moynat’s modern workshops in France employ only skilled artisans, who ply the same techniques that defined the brand 150 years ago. Weeks or months are still needed to make a trunk—but, as Davin points out, the completed piece will last for generations. “Our clients want what is precious, authentic, well-made, and lasting,” he says, noting that, unlike Louis Vuitton and other megabrands in the LVMH stable, Moynat is under no pressure to expand. “Mr. Arnault gave us no specific instructions—other than to surprise him.”

At a workshop in Limoges, the master cabinetmaker Franck Tioni spends days carving the signature curved wooden frames that form the skeletons of trunks and briefcases. Another master artisan cuts the supple leather or canvas and covers the cases with some 500 brass nails, each driven in by hand, exactly 7 millimeters apart. “It takes a full week to just cover a briefcase,” Davin says. But this is no ordinary briefcase: It is slightly curved on one side, so that it can be carried without knocking against the leg. Every piece has a personalized, numbered lock, allowing clients to use a single key for multiple pieces.

Most patrons of the shops are not familiar with Moynat’s legacy, but those in the fashion and luxury worlds have a historic appreciation for the brand, and a number of collaborations are already in the works. “We like special orders, because it challenges us to see how far we can take the savoir faire,” says Nair. Among recent projects is a curved trapezoidal case that attaches to the handlebars of a bicycle and is equipped for a picnic (starting at $37,000). Other custom commissions include a leather Krug Champagne case that is contoured in the shape of the bottle and special boxes for watches, games, and jewelry. One of the most complex commissions is a jelly-bean-shaped trunk designed to hold an electric scooter—and to fit into the luggage compartment of the new Jaguar F-Type. “The idea is that you park your fast car and enjoy the city in a slow, romantic way,” says Davin, who tends to wax poetic when talking about designs for picnics, getaways, and moments to slow down.

That romantic notion of travel also inspired Pauline Moynat, who arrived in Paris from the Savoy region at the age of 16 and began working with the trunkmaker François Coulembier, whose family co-owned the brand until 1976, when they closed the business. Moynat opened its first store in 1869 at 5 Place du Théâtre Français and later expanded to the Avenue de l’Opéra, which led to commissions for the opera and theater. In fact, after 1878, when the firm added a range of women’s handbags, one was named for Gabrielle Réjane, a famous belle epoque actress. This was likely the first handbag named for a star—a commonplace practice today—and Nair has paid homage to this industry first by creating a slightly modified version of the Réjane bag (starting at $4,100) that bears the original’s clean lines and chic curves. Moynat also brought back its signature M canvas pattern, designed in 1920 by the artist Henri Rapin for the Universal Exhibition of Barcelona.

To herald the arrival of Moynat for the 21st century, Arnault opened a striking two-level store on the rue Saint-Honoré in December 2011. The venue’s art deco details, vintage trunks, and other memorabilia recall the brand’s rich past. The main floor showcases men’s and women’s leather goods and accessories, while the second floor is devoted to the trunks and a private area for bespoke commissions. In March, a second location opened on London’s Mount Street, across the street from the Connaught hotel; this new shop also has an area dedicated to custom services.

The London opening, however, does not presage a Louis Vuitton–style rollout of Moynat shops around the world. The small workshop could not possibly meet the demand, says Davin, who prefers to maintain a sense of mystery around Moynat: He wants clients to take pleasure in discovering the brand—just as Arnault did before so imaginatively planning its return voyage.