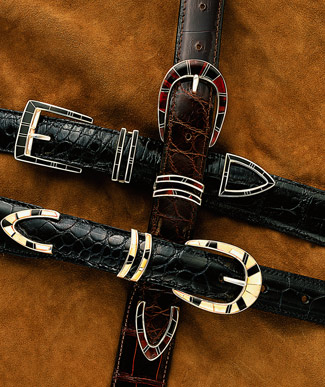 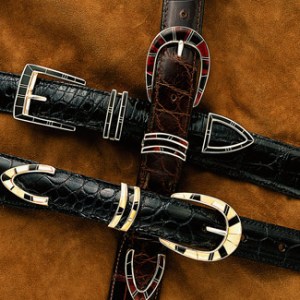 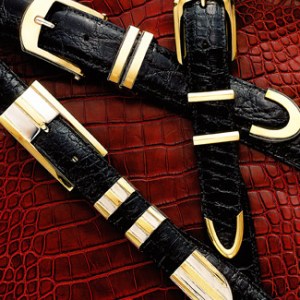 An elderly gentleman walked into J.W. Cooper at Florida’s Bal Harbour Shops mall recently wearing a distinctive Western-etched three-piece belt buckle set that immediately caught the attention of store owner Todd Rauchwerger. “I told him, ‘That looks like a great old Bohlin buckle,’ and he said to me, ‘Son, I bought this buckle in 1937 for $17.’ And it was still on the original leather strap,” recalls Rauchwerger. He slyly offered the man $25—and was politely turned down—for the well-worn buckle similar to those he sells new in his shop for $800.

“What makes it so collectible is that it was made by the Edward H. Bohlin Co. in the 1930s, when Edward was still alive and running the business,” explains Rauchwerger, who, at 45, has spent his entire adult life selling belts at J.W. Cooper. He became a partner in the business in 1984 and bought it outright in 1998. His lifelong experience has made him one of America’s most well-versed experts on collectible buckles. According to Rauchwerger, at the height of Bohlin’s career, he was the saddle maker for all the major Western stars, including Tom Mix, Roy Rogers, and John Wayne. The Bohlin company is still in business today, though under new ownership. And it is a rare occasion when buckles crafted by the original master come on the market.

Equally scarce are those gentlemen who understand and appreciate the nuances and artistry of custom-made buckle sets and exotic straps, such as those made exclusively for J.W. Cooper, which will open its second shop in February 2004 in the new AOL Time Warner Center in New York. “A man will buy expensive suits from Armani or Zegna,” says Rauchwerger, whose shops also carry made-to-measure boots. “He’ll pay $2,000 for a pair of custom-made shoes. He’ll spend $40,000 on a watch by Patek Philippe. And then he’ll wear a beautiful alligator belt with a 25-cent buckle.”

The original J.W. Cooper shop opened in 1979, just before Urban Cowboy galloped across cinema screens and Western wear became a major fashion trend. These days, however, nearly 75 percent of Cooper’s offerings, especially those slated for the New York store, reflect more refined styling, with dress buckles ranging in price from $200 to $15,000. Most of the buckles are made from sterling or gold, and many are adorned with stone inlays of diamond, lapis, red tigereye, onyx, black jade, and Mediterranean coral. One handcrafted buckle is made of 10,000-year-old mammoth ivory; another is carved from mother-of-pearl with turquoise animal figures. Straps come in an array of skins, including calf, ostrich, lizard, and eight kinds of alligator—taken from the shiny belly to the matte horn and back to the more exotic tail.

“These things are not produced by the thousands or even hundreds at a time, but are made by individual artists working by hand,” says Rauchwerger, whose treasure hunts for the works of previously undiscovered artists such as Elan Varshay, B.G. Mudd, Marshall Stanton, Clint Orms, and Mark Kielty take him on the road five times a year. “That doesn’t mean the buckles aren’t cast, only that a great deal of handwork goes into the finished product.” These are works of art in their own right, he emphasizes. And as with any art, they can be viewed with a collector’s eye.