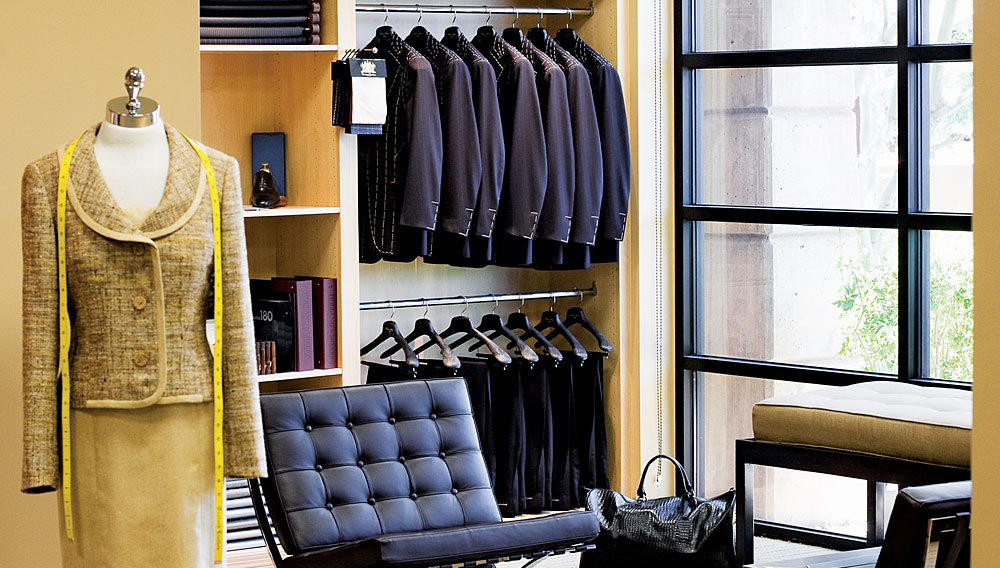 This fall, a handful of Arizona businessmen will board a flight to Chicago, where they will convene in a century-old oak-paneled boardroom outfitted with a concealed bar (a relic from the Prohibition era). There they will savor a fine meal, great wines, cigars, and sweeping views of the city’s skyline. While this may sound like the beginning of a typical corporate retreat or executive escape, it will be nothing of the kind: The men will be visiting Oxxford Clothes’ headquarters for an in-depth look at how the brand’s bespoke suits are made, and for the opportunity to create their own custom wardrobes. During this two-day affair, they will meet individually with a skilled tailor who will take precise measurements, and they will consult with expert advisors to determine the best styles and fabrics to satisfy their particular needs.

This private tour of Oxxford Clothes is the brainchild of Eddie Fischer, a self-proclaimed “clothing concierge” who last November opened Saverio Custom Clothiers, a by-appointment atelier in the exclusive DC Ranch section of Scottsdale. Rather than simply measure and advise his clients on handmade suits from the collection of, say, Attolini, or shirts from L. Gambert, Fischer wants to enrich their enjoyment by offering an intimate view of bespoke fashion. Gaining for his clients unprecedented, behind-the-scenes access to some of the world’s finest clothing factories and enabling them to select from archival fabrics that are otherwise not offered are integral parts of his company’s service.

“For me it’s like putting someone in a candy store,” says the 40-year-old Fischer, who plans to organize visits to clothing factories and workshops in Italy, the United Kingdom, and the United States for small groups of clients. “What better way to appreciate a suit than by giving a man the opportunity to talk to the actual tailor who is going to spend three hours just to sew on a collar or a lapel?”

A one-time mortgage broker who favors banker’s pin-striped suits (worn, in his own idiosyncratic style, with two-tone spectator shoes), Fischer was a bespoke client for years before he decided to embark on his own career in the clothing trade. “As a customer, whenever I was offered a different shirt collar, custom monogramming, or a contrast lining, I would gladly pay for that little something extra,” he says.

Such details are standard options at Saverio, which Fischer named for his great-grandfather, a carpenter from Naples, Italy, whom he never knew. A black-and-white image of the man wearing white tie and tails on his wedding day serves as the store’s logo. “In all the pictures I have of him, he’s dressed to the nines,” says Fischer. “Back then, men, even those without money, understood the importance of dressing well.”

The clothier hopes that his factory excursions will convince more men—especially those in the sartorially relaxed Scottsdale region—to take similar pride in their wardrobes. Once a man experiences this process, he says, “he is more likely to buy four suits, rather than one, the next time he comes into the store.”