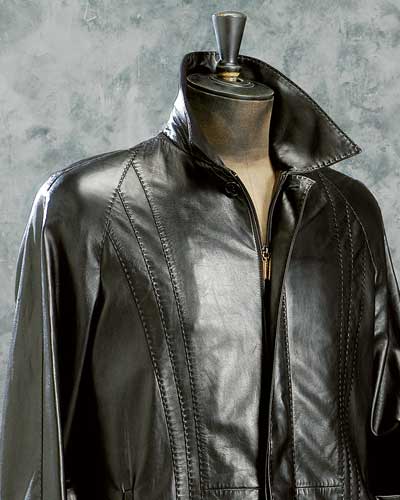 Zilli’s Alain Schimel first elevated the image of the leather jacket in the 1970s by rendering it in lamb suede, peccary, alligator, and other costly skins, and then finishing his designs with artisan details such as custom-printed Italian silk linings and fully taped seams like those applied to tailored clothing. “Before that, leather was mostly used for flight jackets and motorcycle jackets; it was not considered an upscale material for wealthy businessmen,” says Schimel, who founded the French leather goods manufacturer and named it after Teofilo Zilli, a tailor who worked for him.

Under the younger Schimel’s direction—and with help from Bijan, the by-appointment-only Beverly Hills retailer that introduced the brand to the United States—Zilli has evolved into one of the most innovative and high-quality outerwear brands, offering coats embellished with fur trim and other hand-sewn details. Adding these features is time-consuming and limits the company’s monthly production to fewer than 450 jackets, which are available at Battaglia and Bernini in Beverly Hills, Galtrucco in Miami, and a small number of other boutiques. Even Zilli’s simplest jackets come with two different removable collars, and each garment is marked with a gold bar bearing the company logo, a tag more distinctive than a fabric label.

The signature gold bar now can be found on an ever-expanding line of menswear, as Zilli departs from its outerwear and leather origins. Among Zilli’s new offerings are classically tailored clothing, fine-gauge knitwear, and hand-finished footwear—all made in Italy—as well as belts and other small exotic leather goods produced in France. The most successful new ventures have been the firm’s ready-made shirts, neckties, and belts, all of which incorporate many of the fanciful design elements exhibited by Zilli outerwear.

“We put a lot of fun details inside our garments. They are little secrets just for the customer,” explains Schimel’s daughter, Alexandra Schimel, who oversees airport retail distribution. Zilli’s handmade duchess silk ties are woven or printed with 60 thematic designs—ranging from multicolored stripes and geometrics to florals—that, like Hermès neckwear designs, change seasonally. Other distinguishing features are directly linked to the leather collection. “If you look at the backs of our ties, you will see a lot of the same hand-stitching that you find inside our jackets,” explains Alexandra. “And we sew on a little gold logo instead of putting it on a label,” she adds, while noting the neckwear’s complicated decorative ribbon trim.

The company’s Sea Island cotton shirts are just as detailed, with triple-stitched seams—a Zilli hallmark—and a wide selection of collar and cuff styles. Each of the belts and small leather accessories is made from a single skin, requiring a sizable, flawless piece of hide. One new leather collection, Morgany, is fashioned from leather that has been painted to resemble tree bark.

“We’re putting a lot of emphasis on the shirts, ties, and accessories because we see them as a stepping stone into an American man’s wardrobe,” explains Alain. Once a gentleman is impressed with Zilli’s furnishings, he adds, “We have a much better shot at getting him to try on one of our jackets.”