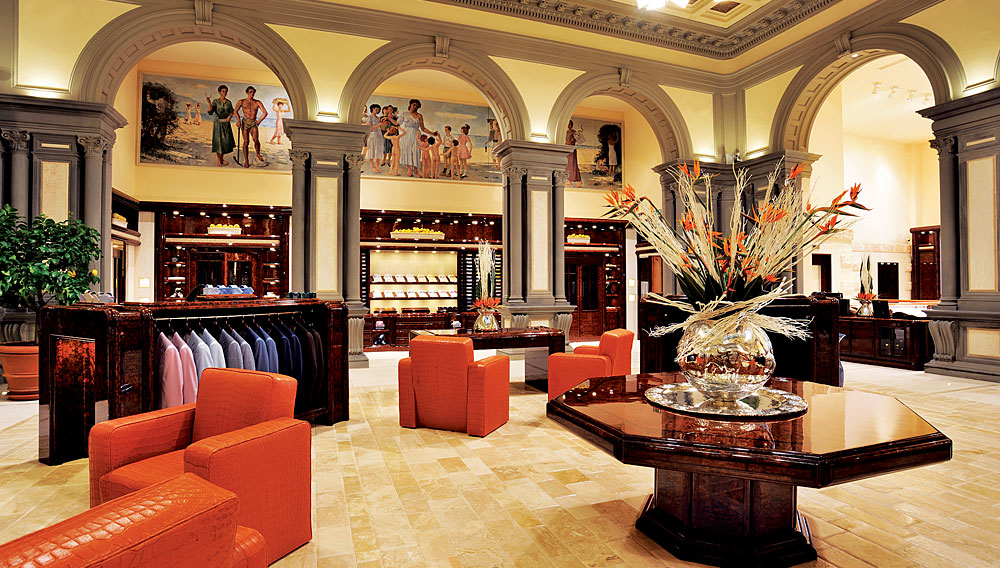 Since he established his menswear business nearly four decades ago, Stefano Ricci has dreamed of opening a signature shop in Florence, Italy, his hometown and the birthplace of his brand; but the indomitable designer, known for his swanky suits, colorful silk-print ties, and exotic-skin accessories, was unable to find a suitable location to showcase his fashions. Until this year, that is, when the 15th-century Palazzo Tornabuoni—the former home of Alessandro Ottaviano de’ Medici, who became Pope Leo XI—was restored and converted into a members-only residence club operated by the nearby Four Seasons Hotel. Ricci marked the July opening of his grand 10,000-square-foot flagship store, in the palace’s former carriage entry and adjoining armory, with a lavish party.

“A building like this is untouchable; I had to thoroughly consider every choice, not as a law but out of respect,” says the 61-year-old Ricci. He restored the space to reflect its original splendor, preserving its classical architectural details, a 500-year-old fresco, and the hand-polished travertine floors. Pairs of Ionic columns and towering arches punctuate the space, which is crowned by a restored 19th-century stained-glass ceiling. Between the columns, walnut wardrobes display the designer’s suits and shirts, as well as pieces created for this store, such as silk scarves and handmade crocodile-and-sterling-silver pens that resemble the cigars the designer habitually—and passionately—smokes. Yet the most distinguishing feature of the shop is not its stock but rather its resident tailor, Antonio d’Angelo, formerly of Brioni. D’Angelo is available to take measurements and fit a client with a custom-made suit.

Because the Palazzo Tornabuoni sits near Ricci’s design atelier, the store serves as a platform for unveiling new concepts. Ricci’s home-decor collection is housed on the shop’s lower level in what the designer refers to as “the Royal Suite”—an apartment-like space complete with a living room, dining room, and bedroom. Each area spotlights a different aspect of the designer’s home offerings, including made-to-order bed sheets, ceramics, and porcelain dinnerware that draw on motifs from the expansive library of graphic prints used for his shirts and neckties.

Given Ricci’s reputation for creating such flamboyant objects as briefcases emblazoned with prehistoric mammoth ivory, the designer has shown restraint at the palace. He says that the store expresses an evolution of his changing palette and style. Still, his taste for the extravagant asserts itself in the details. The staircase’s handrails and the furniture have been upholstered in orange crocodile, while the bathrooms are covered from floor to ceiling in gold-leaf ceramic Battiloro tiles. All of the decorative accents are in keeping with Ricci’s insistence that a castle, like a man’s wardrobe, is “incomplete without a few personal touches.”