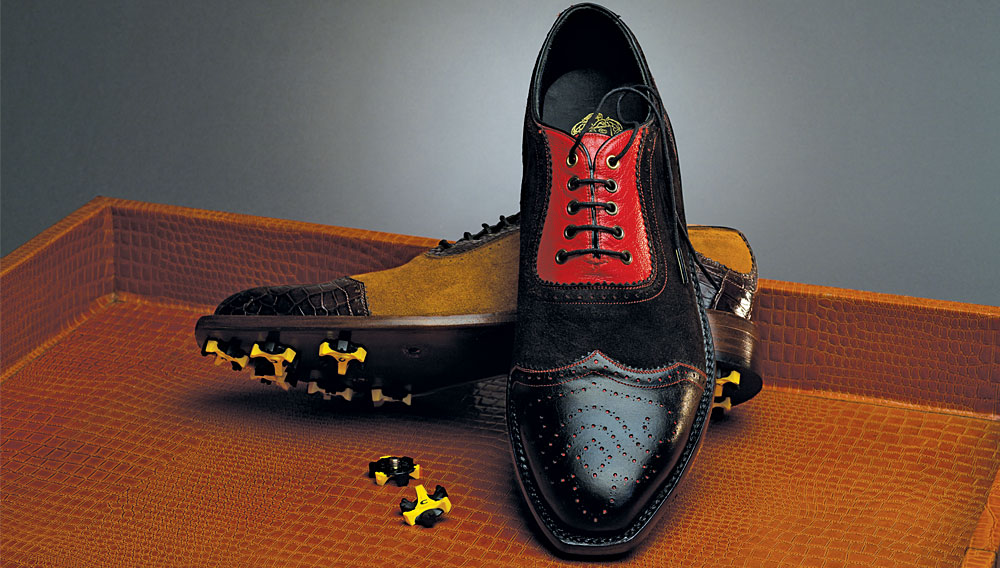 When Ben Hogan was at the top of his game in the early 1950s, the American golf professional used to say that the secret to his winning swing was not so much in the wrist as it was “in the dirt.” What Hogan did not disclose was that his golf shoes, custom-made by Maxwell of London, harbored an anomalous 12th spike in the center of the sole that provided the extra bit of traction necessary to put added power behind every ball. That detail was not lost on Warren Vail, a former mortgage broker turned shoemaker who insists on incorporating the Hogan 12th spike into every pair of his Parker McClain golf shoes.

Launched three years ago and named for Vail’s two teenage sons, Parker and McClain, the San Diego–based company is one of the last in America to make custom golf and dress shoes; as such, the firm has quickly attracted fans among the ranks of country club players who appreciate the style and craftsmanship of its bespoke footwear. “Tennis-shoe makers have taken over the golf industry and inflicted their [casual] fashion sense on the game,” says Vail, an avid golfer who still believes players should dress properly on the greens. “I always wear a very nice pair of slacks to play golf and resented the fact that I couldn’t find a beautiful pair of shoes to go with them.”

Each pair of Parker McClain shoes (and matching belts upon request) is handmade in a cowboy-boot factory in Texas from single unblemished hides of calf, shell cordovan, ostrich, or alligator. Other exotic leathers may also be used, and some pairs incorporate soft pigskin insoles. The footwear, which features Goodyear welt outsoles, can be embellished with lemonwood pegs, rather than nailheads, for a vintage look. Especially with alligator skins, the firm’s craftsmen employ millennium finishing—a process that relies on hand-buffing rather than chemical glazing—to bring out the leather’s natural sheen. The shoes, which range in price from $1,500 for calfskin to $5,000 for alligator, can be identified by their two gold top eyelets, a subtle nod to Vail family history: An ancestor, Alfred Vail, was a coinventor of Morse code, which substitutes dots and dashes for letters, just as the shoe eyelets replace a company logo.

Parker McClain offers myriad color options (more than 75 hues in ostrich alone) and styles that include classic dress brogues, two-tone spectators, perforated cap toes, and tasseled loafers. “Just because it’s a golf shoe doesn’t mean it can’t be stylish,” says Vail, who can offer no proof that the Hogan-inspired 12th spike will seriously improve one’s swing. But, he adds, “It certainly can’t hurt.”