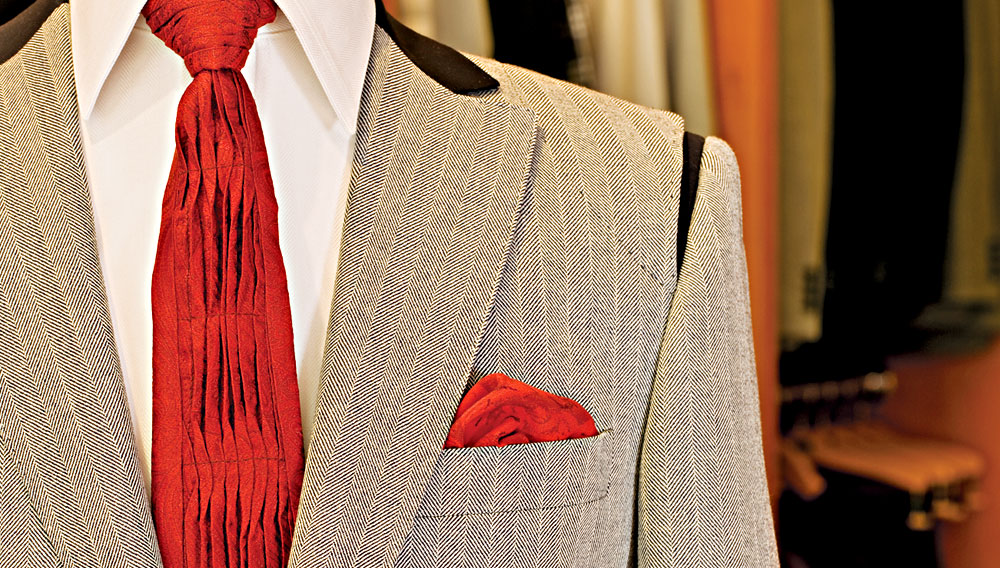 When Eddia Mirharooni was an architect in his native Iran, he designed an innovative suspended roof that appeared to float above the walls on sheets of glass. That blueprint brought him top honors at a prestigious design competition, along with a position at a Los Angeles architectural firm. Now, more than three decades after Mirharooni set aside his master’s degree in architecture to pursue a career in textiles and menswear, his suspended roof idea has been reborn as pendulous pockets inside a collection of handmade Italian suits.

“The pockets are hidden inside the inner lining and suspended from the shoulder so if you put your keys or cell phone inside, the weight is on the shoulder and not the pockets,” says the designer, whose label is simply called Eddia. The patented construction method, he says, ensures that the pockets will not tear or lose shape.

The pockets are just one of many architectural elements in Eddia menswear, which is sold at Mirharooni’s Beverly Hills shop. Jackets may be equipped with the designer’s signature “floating shoulder,” in which the shoulder and the top of the sleeve are attached to a contrasting panel of fabric, keeping the shoulders straight and wrinkle-free and allowing the sleeves to move with ease. A streamlined belt buckle magnetically clicks into place, a little like a doorknob, and a bias-cut, fishtail waist on the back of trousers invisibly expands and contracts without the aid of elastic. Eddia’s dress shirts have a “tilted sleeve,” which provides a more precise fit because of a slightly forward attachment that accommodates the natural arc of a man’s arm. For spring, a new series of “sculpted neckties” incorporates panels of ruched silk to create a highly textural effect.

“I always had in mind to bring something of my architectural background into the fashion business,” says Mirharooni, who developed home textiles and custom carpeting before transitioning into clothing in 2001. He began with neckwear, creating a series of printed ties as gifts for his interior design customers. When those clients began asking for more, he expanded into exotic-skin accessories, sterling-tipped pens, and, finally, menswear fashioned with an architect’s sense of engineering.

His latest project is denim: Mirharooni’s new collection of jeans is made with panels of denim cut on the diagonal and assembled so that the twill weave on one side of the jeans goes in the opposite direction of the other, like the girders of a building. The result, Mirharooni says, is “much more durability and a straighter line.” In other words, they are built to last.