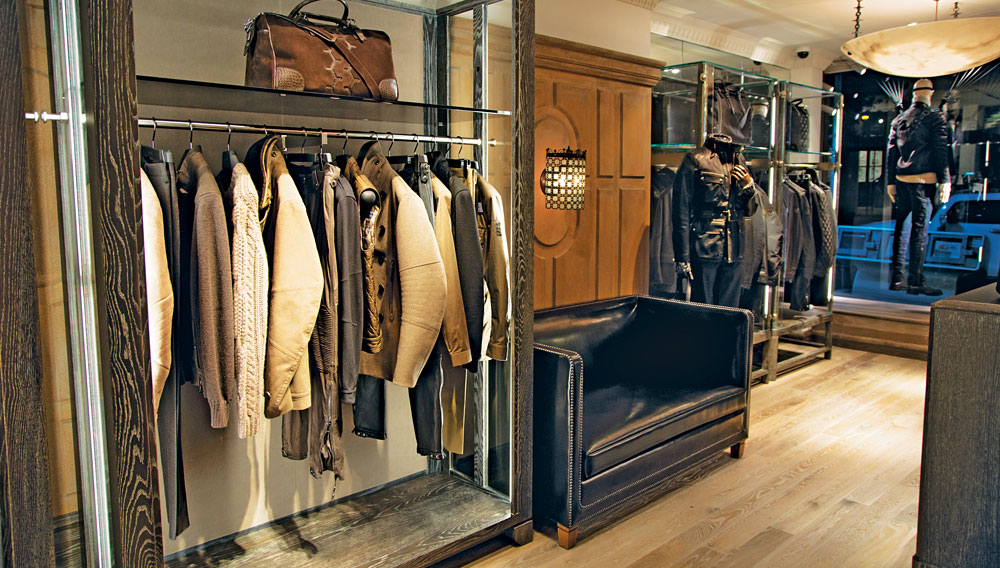 For nearly a century, Belstaff has been synonymous with the open road. The company, founded in 1924 in Staffordshire, England, is best known as the maker of stylish waxed-cotton motorcycle jackets built to withstand the elements. Classic jackets such as the Roadmaster and the Trialmaster were favorites of sartorial icons from actor Steve McQueen to revolutionary Che Guevara to British trial racer Sammy Miller, for whom the Belstaff Sammy Miller Replica jacket was created in 1955. Today the garments have attained a cult following.

“When you wear Belstaff, I imagine it’s how Batman must feel,” says Harry Slatkin, the company’s CEO and co-owner. “It has this daring quality to it. You feel like you can jump on the back of a Triumph or hop into an Aston Martin and open it up to 150 mph.” Slatkin, along with designer Tommy Hilfiger and Swiss fashion group Labelux, purchased the label in June 2011 with the aim of global expansion.

With that goal in mind, Slatkin hired Martin Cooper, a veteran designer at Burberry, who has combed through more than 3,000 pieces in the Belstaff archives, drawing on the technical expertise and automotive history of the brand. As a result, the full range of waterproof cotton models has been reintroduced in slimmer cuts, and the line has been expanded to include ready-to-wear pieces and accessories that up the luxury quotient but keep the brand’s distinctive edge. Both the Stanwick trench coat, edged in crocodile ($10,095), and the black oiled-leather Banbridge boots ($1,195) would work as well for a man riding a vintage motorcycle as they would for a man wearing a suit to dinner at a tony club.

“These are clothes for the Range Rover royal set,” says Slatkin, referring to the well-appointed SUV that seamlessly transitions from city to country pursuits. “I really wanted to do a brand that fills your entire life.”

In September, a William Sofield–designed, 2,600-square-foot flagship store featuring Argos marble floors and a Bel­gian fossil stone fireplace opened in New York, followed by store openings in Milan and Munich. This coming June, a mammoth 26,000-square-foot London flagship is scheduled to open on New Bond Street; stores in Paris, Los Angeles, and several destinations in the Middle East are in the works. Ultimately, Slatkin wants to take the brand beyond outerwear, into categories as diverse as watches, fragrance, and eyewear. “We will be the whole world of Belstaff,” he says. “When you become a Belstaff customer, you’ll become a ‘Belstaffian.’ ”