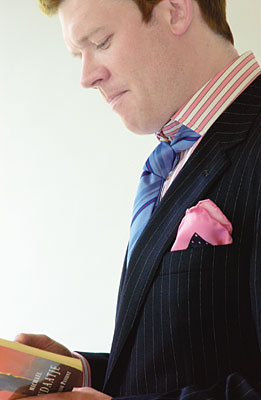 Two years ago, as British brands Burberry and Paul Smith were ringing up record sales, the menswear buyers at Saks Fifth Avenue met with several of Savile Row’s storied suitmakers to find a partner for an exclusive business relationship. Ultimately, Saks bypassed esteemed tailors such as Huntsman, Henry Poole, and Chester Barrie and signed an agreement with Savile Row newcomer Hield, an 82-year-old fabric maker with no consumer brand recognition outside of England and, even more surprising, no previous experience in making men’s clothing.

Currently, a number of up-start English suitmakers are trying to refresh the country’s dated fashion image. Yet Hield, which is named for brothers David and Hugh Hield, who founded the company in 1922, has some distinct advantages over its competitors. For one thing, the company has a long history as a cloth supplier to some of the most well-known names in menswear: Ralph Lauren, Giorgio Armani, Burberry, and Paul Smith, among others.

“Until now, all of our customers were either designers or tailors, so we come into the business with an eagle’s-eye view of fine suitmaking,” says Samer Chamsi-Pasha, the company’s sales director, who draws a parallel to Italy’s Ermenegildo Zegna, another cloth manufacturer that developed its own hugely successful clothing line. Hield’s interactions with the world’s top designers, adds Chamsi-Pasha, give the company access to a wide variety of creative sources for developing its own look. The collection–which includes suits, sport coats, dress shirts, neckties, knitwear, leather goods, and even footwear–is distinguished by its emphasis on English-made English style.

The traditional English suit has a slim cut with a dramatically tapered waist and an overaccentuated chest, and it is typically made of heavy cloth. “It’s cut in the same mold as those that came out of England in the Victorian age,” says Chamsi-Pasha, who has updated the classic silhouette and rendered it in Hield’s lightweight super wool fabrics with horsehair linings. Hield’s two models–a full three-button with side vents and a two-button athletic-fit, both starting at about $1,500–maintain the traditional contoured silhouette, though with a slightly relaxed waist for comfort. Hield also has reined in the typically broad English shoulder. “It’s slightly softer, with a little less padding,” explains Chamsi-Pasha. “But it’s still what I call a man’s shoulder.”

Hield’s other subtleties include split-back yokes on dress shirts for more precise pattern matching, and six-hole mother-of-pearl buttons that allow the brand to create a signature “H” pattern with the stitching. Its shoes feature distinctive off-center laces–a centuries-old design that more closely follows the contours of the foot.

Such idiosyncrasies certainly do not guarantee success, but the brand did receive that early endorsement from Saks Fifth Avenue, the exclusive retailer for Hield menswear and accessories for the past two years. This spring, Hield will expand into specialty shops that include Tyrone in Roslyn, N.Y.; Da Vinci Collezi­oni in Scottsdale, Ariz.; and Everard’s in Washington, D.C. At the very least, says Chamsi-Pasha, “Hield is proving that England is still a force to reckon with in menswear.”