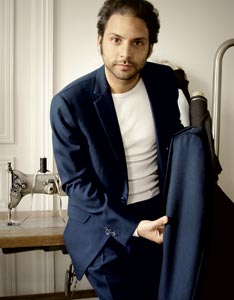 Michael Tapia has always considered himself a citizen of the world, and rightfully so. The Mexican-American menswear designer was born and raised in Southern California, earned most of his professional training working with Ralph Lauren in New York, and now heads his own signature collection based in Paris. What’s more, Tapia’s clothing is made in Italy, and his largest client base, until now, has been affluent Japanese gentlemen who admire his lean and clean design sensibility.

Tapia has spent the past three years establishing his upscale ready-to-wear and made-to-measure menswear collection in Japan, France, and Italy, using these countries as testing grounds before exporting it back home to the United States. The Japanese, in particular, says Tapia, are much more willing to embrace lesser-known brands, because they attribute inherent value to apparel that carries an American or English label—recognizable or not. Tapia hopes to see his collection in Barneys New York and other top American retailers within a year. “To offer a certain quality level in America,” he says, “you need name recognition.”

The 33-year-old designer learned this lesson firsthand four years ago, after he launched a luxury trouser collection at Bergdorf Goodman that, at $700 a pair, failed to generate significant sales. “They were selling the pants alongside suits for the same price,” he explains.

Then, in 2001, Dunhill enlisted his services to develop a special Michael Tapia for Dunhill collection that would lure younger clients. He says that while Dunhill was a great opportunity to feature his products in a luxury environment, he soon learned that the conservative Dunhill man is not the Michael Tapia customer. The back-to-back disappointments spurred him to develop his own tailored clothing collection—on his own terms.

As an American designer who moved to France because of its haute couture fashion history, Tapia finds it ironic that his exhaustive search for a factory capable of fashioning the artisan-made suits he envisioned ended in Italy at Castangia. “When I came in with my ideas, the owner, Alberto [Grilletti], was very open to collaboration,” says Tapia, whose suits, which start at about $1,500, are reminiscent of the slim American style of the mid-20th century. “The look is definitely not Neapolitan [like Castangia’s],” he explains. “It has a natural, but sharp, shoulder and is slightly shorter, with lots of attention to the arm shape and the way the back moves.” Most of Tapia’s suits also come with a host of characteristic details, such as red linings and red-stitched boutonniere holders.

“I think it’s a very American look, similar to the suits worn by John Coltrane and Miles Davis,” says Tapia. “They wore clothing that really challenged the way men’s suits were constructed in the past. What I want to accomplish is a natural progression of style that existed in the U.S. from the 1930s to the 1960s, when America was really pushing menswear to be better.”