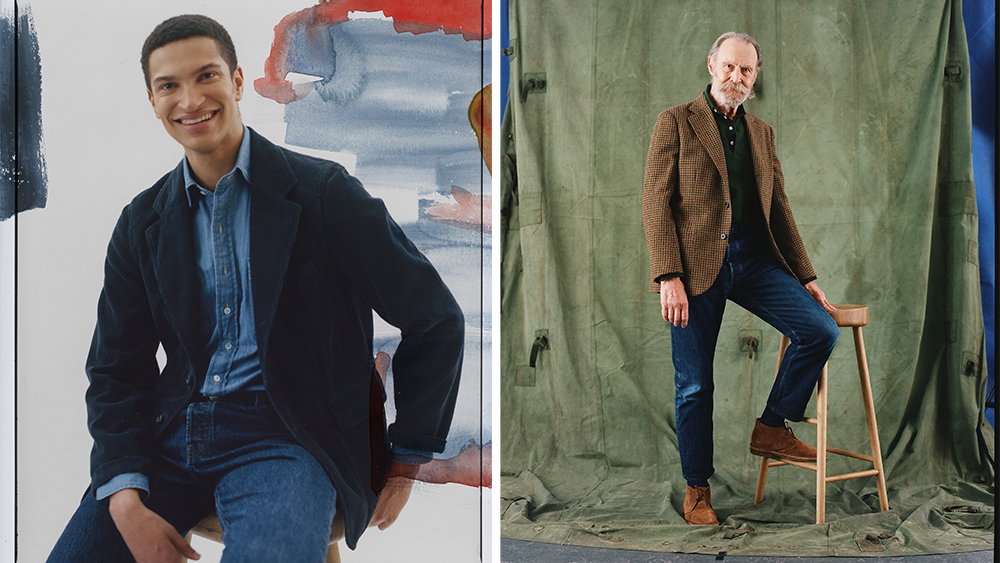 Denim and tailoring are no strangers to one another, as evidenced by a half-century of Ralph Lauren. But as we enter our brave new, dressed-down world, labels best known for suiting are increasingly giving denim its due—both below and above the belt.

Each brand is tweaking the old off-duty favorite to suit its own, more sartorial style. No less a tailored menswear authority than Drake’s has rolled out a new denim collection, encompassing everything from bleach-washed selvedge jeans to five-pocket chore jackets.

“I think denim and casual tailoring have always gone hand-in-hand, ever since Ivy style emerged in the first half of the 20th century,” says Drake’s creative director Michael Hill. “It’s a combination that remains relevant, but what we have often found is that it’s hard to find jeans that really work with tailoring. Modern cuts err on the slim, low-rise side of things, which just doesn’t pair well with an oxford shirt and a tailored jacket.”

Hill’s solution? Hiking the rise and relaxing the fit.

Drake’s denim works as well with a tweed blazer as it does with a T-shirt.  Drake's

“The Drake’s jeans were designed partly in response to this. They have a higher rise, and a slightly more relaxed cut, making them perfect for wear with a soft-shouldered jacket and a pair of suede shoes,” he says. We’ve sung their selvedge’s praises before.

Denim shirting has proven increasingly popular, and bespoke makers such as Budd have begun offering them off-the-peg. Now some labels are turning their attention to the ur-denim shirt, the Western pearl snap, and transformed it from rugged to refined.

Paris-based Husbands has introduced its own take, which nails the Marlboro Man look without falling into costume territory.

“When we develop a new product, we don’t want to make a copycat of the past,” say Husbands representative Noé Bouilloc. “For this Western shirt, we went for a very dense and resistant selvedge fabric,” which is faithful to the garment’s origins as a hard-wearing uniform for ranch-hands. But, Bouilloc says, the cut is decidedly natty: “The collar, the armhole, the stiches—everything is completely rethought as to not make an archive replica.”

By virtue of its reengineering, this most American of garments fits into Husbands’ sexy, thoroughly French aesthetic typified by wide lapels and high-waisted trousers.

“The hand techniques done by our shirt maker in Naples offer the perfect twist on the classic shirt we all know and love,” says founder Jake Mueser. “Our sleeves are hand-set, giving more movement and comfort, and the collar is done by hand as well. The details of the construction add a unique and luxurious feel to an American classic, especially when paired with our choice of soft washed denims.”

As for their utility, Mueser has a sky’s-the-limit attitude: “The beauty of a denim Western shirt is in its versatility. They can work with a classic suit and tie, under a crewneck sweater or untucked with a pair of jeans. I would encourage people to experiment. They go with anything from a linen suit to a Harris tweed blazer.”

Few shops better exemplify the jeans-and-a-sport coat look better than Sid Mashburn, which has championed the combination since its founding in 2007. After noticing that many customers were bringing in their Levi’s 501s for trimming, Mashburn launched its own jean featuring a more tapered leg that would better complement its tailoring.

“I think where you can go off most of the time is the proportion,” says founder Sid Mashburn. “You’ve got a jacket that might be too small on top and pants too big on the bottom, or pants that are too short with a jacket that may be too big. You want your whole look to kind of have a red thread through it.”

But proportion is just one piece of the puzzle. Texture plays a vital role, which is why Mashburn warns against simply pairing any suit jacket with your jeans.

The last year has been a tough one for tailored clothing, but perhaps we’ve been thinking about it all wrong. Rather than waiting for the “all clear” to adopt a straight-edge jacket and tie, consider the current moment your chance to experiment with tailoring and denim in all its forms. And by the time we’ve come out on the other side, you may have even found a new uniform.