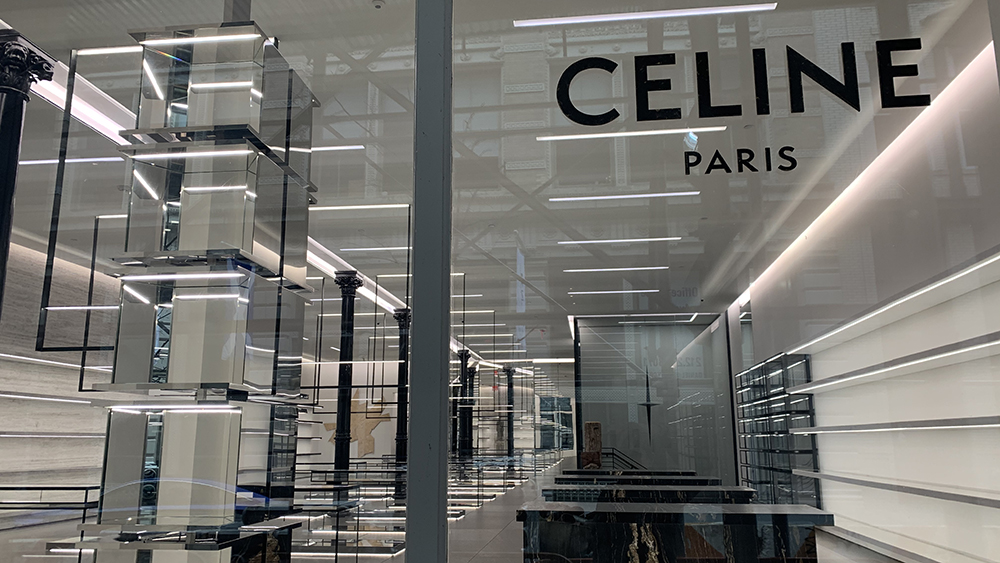 SoHo sidewalks are traditionally packed on spring weekends, especially as the weather warms and New Yorkers (and tourists alike) flock to this popular neighborhood of tony art galleries, indoor-outdoor restaurants and designer boutiques.

But that was then, and this is now: With the Coronavirus-related shutdown in place since mid-March, SoHo is among the many New York City neighborhoods that have shifted from energetic to empty, with photos of deserted streets widely shared in news reports and on social media. Among the most surprising sights: upscale designer boutiques that aren’t only closed, but have also been thoroughly emptied of their merchandise.

That’s the case on SoHo’s Greene Street, where pricey labels like Jimmy Choo, Loewe, Saint Laurent, Chloe and others have adopted this dual strategy. (Robb Report reached out to those brands and many others; all chose not to comment on their retail policies during the social distancing efforts implemented to help stop the spread of Covid-19). And they’re not alone, as several other upscale brands throughout Manhattan likewise display only bare storefronts. But it’s nothing to get nervous about, says Bob Moraca, vice president of loss prevention for the National Retail Federation, the Washington, D.C.-based trade association that oversees the retail industry.

“Retailers typically have these emergency plans in place, though mostly you see them employed for natural disasters, like a hurricane, earthquake or the wildfires in California,” Moraca says. “This is unique because it’s a pandemic, a public-health issue that has caused city authorities to step in and enforce a shutdown. But New York isn’t alone; I was just speaking with someone in Chicago, who was telling me about boarded-up stores along Michigan Avenue.”

Before it was boarded up, Dior’s SoHo store was cleared of most merchandise.  Yvette Quaizon

Moraca says retail policies in times of emergency are rooted in a protection approach that’s threefold: people, assets and brand—“in that order,” he adds. “Risk of loss is a key consideration, but it isn’t the only consideration.”

Indeed, don’t assume that those chic boutiques have been emptied of their wares for the sole purpose of discouraging looters. While “smash and grab” is a scenario that can’t be ignored—“especially when streets are empty day and night, which is eerie in itself, and someone might try and take advantage,” Moraca says—it’s just as likely that merchandise has been moved to a central distribution warehouse, where it still can be sold via e-commerce and private-client transactions.

While most retail shops in Soho have closed their doors and taped a sign detailing their commitment to social distancing, the luxury stores — Louis Vuitton, Prada, even Coach — have boarded up their windows. Presumably to prevent any looting that might happen as this carries on pic.twitter.com/Kmjocw4Wjo

“When you buy a high-end product online, sometimes it’s transferred out of a store in some other city if it’s not available in a brand’s distribution center,” Moraca explains. “But if that store has been closed for an extended period, that brand may have lost a sale. Moving merchandise out and into a central location prevents that interruption.”

Only the monkeys on display are left at Burberry’s SoHo store.  Yvette Quaizon

Boarded-up storefronts, meanwhile, protect another of the brand’s assets: its image. “Some storefronts literally could have historical value in their architecture, so those retailers aren’t taking any chances with them,” Moraca points out. “We saw similar actions in the days after 9/11; we’re just not used to seeing them in place for this long.”

Ultimately neither panic nor permanence should be inferred by any boutiques that are currently empty, Moraca says. “One of the best things about New York City is its esprit de corps – everyone wants life on the streets and a sense of community,” he notes. “As soon as the green light is given, you’ll see that happen, and people will be excited. That extends to retail as well: There are a lot of moving parts to reopening a store, including the return of inventory, but it will happen. And no matter how much you’ve been buying online while you’ve been stuck inside, nothing replaces that feeling of walking down the street with a shopping bag in your hand. You’ll see.”