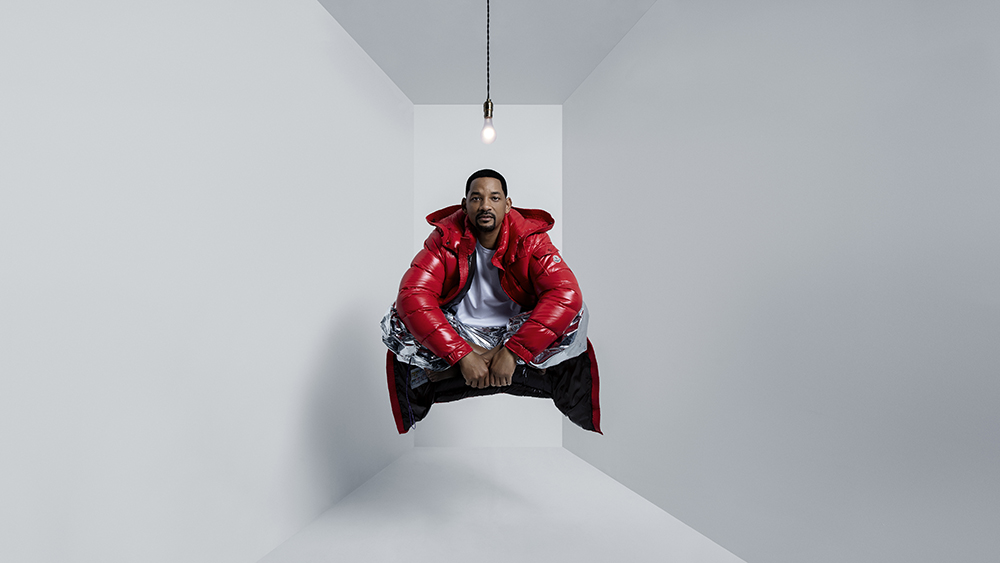 Ever since The Fresh Prince and his iconic hi-top fade graced our screens back in the ‘90s, Will Smith’s career has been on a steep upward trajectory, powered along by his unbridled talent and effusive energy. The two time Academy Award nominee and Grammy winner has an uncanny ability to deliver powerful performances with a side of jollity—which is what prompted Italian luxury brand Moncler to cast Smith in its latest campaign “Genius Is Born Crazy.”

Announced today, the campaign—shot by award-winning British fashion photographer Tim Walker—is a visual study on the notion of genius. It explores the way craziness can often bleed into genius and “highlights the tensions and complexities within the mind of a genius.” It marks Smith’s first-ever fashion campaign and this new role seems to fit as perfectly as one of his Men in Black suits.

“Smith serves as a natural face for the Moncler campaign,” the brand wrote in a statement. “As an actor, producer, and musician two-time Academy Award nominee and Grammy winner, Will brings an outsized imagination and dedication to creativity.”

The 50-year-old superstar was equally enthusiastic to work with Moncler, sharing on Instagram this morning: “I’ve always dug their gear. So I listened to their ideas. Then I was like… ‘That might be genius.’ I started pondering the relationship between crazy and genius and I got more and more intrigued.”

When I got the call from @Moncler that they wanted me to be THE FACE of a FASHION campaign I was like… “These jokaz must be CRAZY.” I’ve always dug their gear. So I listened to their ideas. Then I was like… “That might be GENIUS.” I started pondering the Relationship between Crazy & Genius and I got more & more intrigued. Real Dreamers ALWAYS get called Crazy! I started to wonder… “Are Geniuses born Crazy?! Or can we all get some? :-) #GENIUSISBORNCRAZY

The campaign is also meant to highlight the “crazy streak in Moncler’s own DNA” and reflect the brand’s evolution from making sleeping bags and skiing gear to contemporary streetwear. In it, Smith appears to be effortlessly levitating in an oversized red puffer coat and metallic pants that look as though they were cut from a silver emergency blanket. Moncler’s campaign will also profile other creatives with inherent genius, including Valentino’s creative director Pierpaolo Piccioli, Simone Rocha, Hiroshi Fujiwara, Matthew Williams, Craig Green and Francesco Ragazzi.

Smith is the latest in a series of distinguished gentlemen to partner with a renowned fashion house—55-year-old Matt Dillon was just named the new face of Brioni, and 54-year-old Keanu Reeves can currently be seen in a spate of ads for Saint Laurent, proving that fashion knows no age.