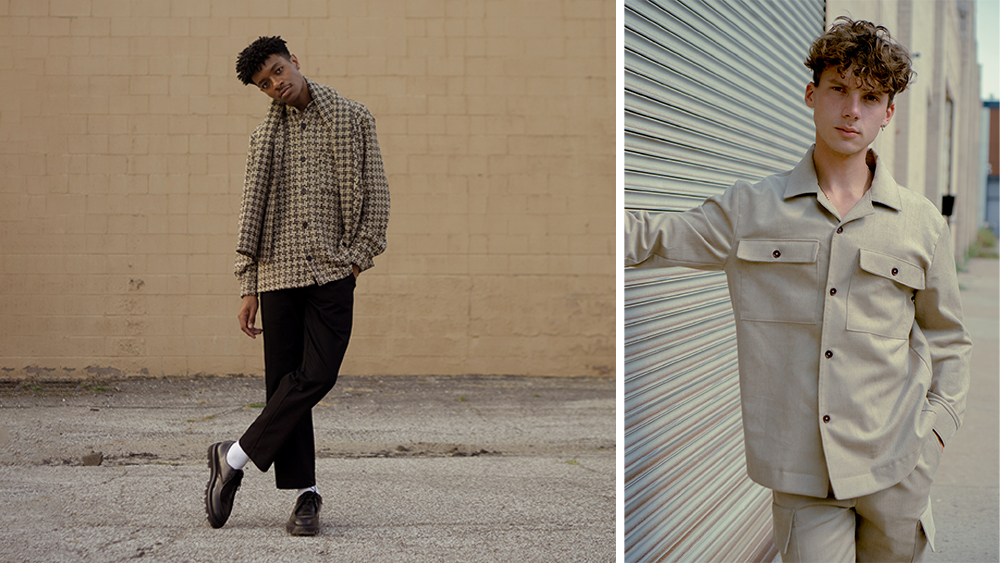 New York, Paris, Milan…Cleveland? Ohio’s second city isn’t without its charms, but few would count it as a fashion hub. History, however, paints a different picture. While America’s style scene has been concentrated on the coasts for most of the recent past, it wasn’t so long ago that Cleveland was a thriving center for the garment industry. At its peak in the 1920s, the city nearly rivaled New York as a mecca for clothing production. Then came the depression, globalization and—long story short—Cleveland’s fashion cred has faded considerably. But William Frederick, a young menswear brand, is aiming to reclaim the city’s sartorial heritage.

Founded in 2018 by native Buckeye William McNicol, the brand is dedicated to luxury with a Midwestern accent, made entirely in Cleveland. “In Cleveland, luxury isn’t really a point of pride or a value you hear tossed around. We wanted to redefine that,” he says. “Initially, it was less of a statement and more of a question.” McNicol found his answer in designs more typically associated with America’s heartland, like humble chore coats and fatigues, rendered in materials worthy of Madison Avenue or Rodeo Drive.

Workwear may be trending on designer mood-boards, but it’s more than a shtick to McNicol. It’s in his roots. Growing up in Wellsville, a village near Ohio’s West Virginia border, his first job was in his parent’s restaurant supply warehouse. A sneakerhead since his school days, McNicol took the gig to save up for a pair of Nikes he’d been coveting. It also provided a firsthand education in what most men prioritize in their clothing, whether their job is white collar or no collar: comfort, utility and durability.

After college, McNicol moved to Cleveland and was working as an insurance underwriter. His passion for sneakers hadn’t waned and he regularly sketched designs for his fantasy kicks—a hobby he kept to himself. After a couple of friends happened upon one of McNicol’s notebooks, they urged him to try making something. Producing sneakers proved tricky but he did find a local factory to realize a Melton wool topcoat he’d dreamed up. With his first piece made, McNicol decided to—what else?—head to New York Fashion Week.

“I didn’t have a ticket to any shows; I just knew it was happening, knew street style was a thing,” he recalls. “I said ‘I’m just gonna go and see if anyone even responds to this piece I made.’” Fatefully, they did—in the bustling crowds outside of fashion shows and at agenda-setting boutiques. When asked where he got the coat, McNicol admits, “It was completely foreign to me, at that time, to answer with ‘I actually made it.’”

Galvanized by the Big Apple’s warm reception, he returned home and set out to make a fully-fledged collection. Of course, it wasn’t quite so simple. “There’s a rich history,” he says of Cleveland’s garmentos, noting the ghosts of the past that live on throughout the city’s many abandoned warehouses. One in particular, the Richman Brothers building, was once the largest clothing manufacturer in the world. “But now it’s an industry with less than 10 people,” McNicol says. “Finding a factory that can construct a garment and make a pattern was very difficult.”

He’s single-handly reviving the city’s fashion industry, though he’s intent on keeping it a small-scale local business. William Frederick’s wares are designed specifically with Clevelanders in mind. “The silhouettes are direct and straightforward, things that people are already accustomed to wearing,” McNicol says, adding that his goal is to create pieces that people live in—luxury for the everyman’s every day.

One of the brand’s bestsellers is a chore jacket based on a Carhartt model he recalls from his days at his parent’s warehouse. The fit has been tailored, while still retaining its utilitarian ease, and crafted in Italian cotton twill and wool flannel accented with corozo buttons. Another signature is a belted four-pocket over-shirt, toeing the line between the elegance of jet-set safari jackets and the rugged appeal of standard-issue work-shirts. This season, it’s available in houndstooth Harris tweed or buffalo-checked Japanese cotton.

McNicol says many of his local clients have become loyal fans of the brand’s trousers, all of which are equipped with fuss-free elasticated waists. The collection is rounded out with louche robe coats and a selection of casual shirts. Laid-back as the silhouettes are, McNicol has a keen eye for textiles. The materials, all in muted neutrals, root the collection in the tradition of classic menswear.