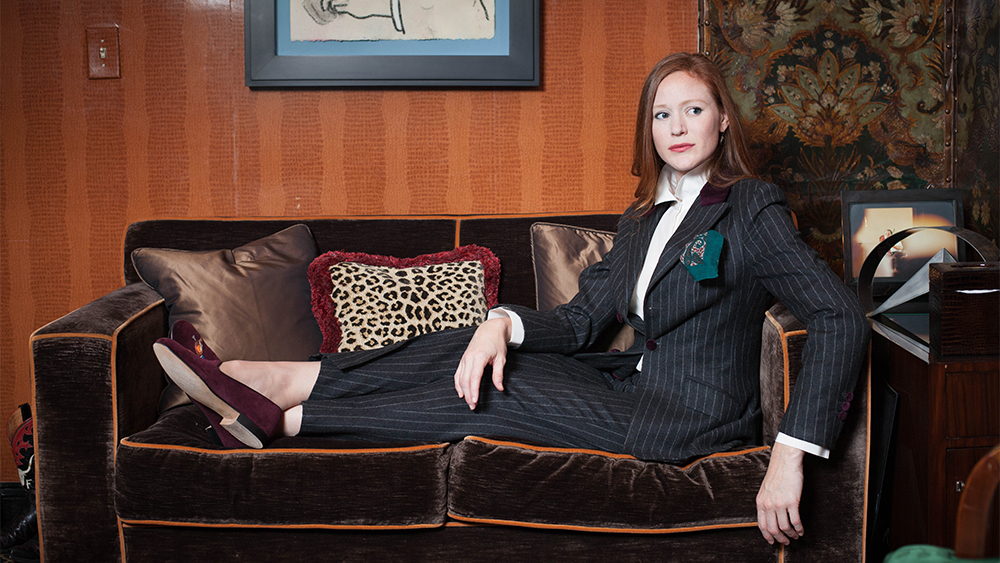 The world of bespoke tailoring appears to be one of the last “boys’ clubs” in an increasingly gender-neutral society. However, those rarified showrooms aren’t necessarily the all-male redoubts they appear to be. Many will tailor for women, although they rarely advertise the service—if you know, you know. But in 2022, new and established makers are increasingly comfortable with courting the fairer sex and adapting the craft to fit women’s needs.

After more than 30 years in business—and the occasional woman client—Alan Flusser Custom launched Flusser Femme in 2015. The firm’s program for ladies includes both made-to-measure and bespoke, the latter of which is not offered to male customers. As owner Jonathan Sigmon explains, the workshops that the business typically partners with couldn’t make for women, but Flusser’s in-house tailor could, allowing them to establish a fully bespoke program for the ladies—which was not without its own set of hurdles.

Flusser Femme for day and for night.  Rose Callahan

“Women’s tailored clothing is certainly more challenging, as you’re molding cloth around figures that often have more curves than men,” Sigmon tells Robb Report. “There are also more styles in womenswear that make the garment design phase and pattern work a bit more involved.” But that’s not to suggest that Sigmon or his business are put off by the difficulty. “We find these challenges are often what lead women to seek out bespoke and MTM tailored clothing in the first place,” he continues. “So, we approach them understanding it’s a great opportunity.” As to what’s being cut, it’s not a dramatic departure from the Flusser house style: a soft shoulder, light canvas and a more classically informed jacket length that suits the needs of the brand’s businesswoman clients. “We prefer a men’s-inspired silhouette—the kind of tailored clothing worn by Slim Keith and Katharine Hepburn,” he notes.

Eric Jensen learned to tailor for women while studying under Luigi Gallo of Rome’s Sartoria Gallo, which has welcomed women clients since its opening in the 1960s. When Jensen established his own branch of the business on New York’s Upper East Side in March 2021, he made it clear that women clients would be welcomed—and that their bespoke garments would be made to the same quality standards.

“We want to make sure that women who come to us for bespoke tailoring get a classic Gallo suit,” Jensen says, defining the firm’s signature as soft and lightly canvassed with unpadded shoulders. “The only difference is that we cut it to accentuate and enhance and actually celebrate the female form.” In practical terms, Jensen explains that may mean highlighting the chest and hips while reducing the waist, though the cut will always be determined by the client’s desires. Regardless of gender, he says, a tailor’s job “is to give clients a look that they can’t get on their own… you enhance what you want to enhance, and you deemphasize what you don’t want to emphasize.”

In addition to his training under Gallo, Jensen received an education by making for his wife, Rachel, who helps manage the business. While he initially suggested a more feminine cut, she requested he make her the same style suit he’d create for a man—but on a woman’s body. The experience was a paradigm shift. “It pushed away the antiquated thought that women want something that’s very feminine, when in reality they’re going to work and they’re going to be in a boardroom, or in front of a judge, or in political spheres,” says Jensen, adding that women account for around 20 percent of his clientele today. “They want to have a suit that is as useful, versatile and powerful as the male suit.”

While cutting has traditionally been a male-dominated occupation, women are increasingly getting on the other side of the shears. Kimberley Lawton studied bespoke tailoring at the London College of Fashion, where she created a tailored womenswear collection as part of her training. She later apprenticed at Huntsman, where she cut for men and women before founding her own house in 2022.

“It was while making for myself that I honed my women’s cut,” she says, reiterating the desire for something “truly feminine” that doesn’t sacrifice the bravado of traditional tailored menswear. The business, which is advertised as “readily on hand to dress all genders and identities,” has a distinctly English house style, marked by strong roped shoulders, suppressed waists and wide peak lapels. When making suits for for women, these powerful features are only accentuated.

“You can push a little more, have larger lapels, wider skirts, more roping,” Lawton observes of the freedom womenswear affords. Today, Lawton counts herself as among a handful of London tailors who make for women. “It’s a more difficult cut to master, but that’s what makes it all the more satisfying,” she says. She estimates that about a third of her clientele today are women—and has reason to believe that number may increase, saying “I regularly get calls from women who are looking for something different, be it for work, weddings or just for pleasure.”

As anyone who’s pursued it can attest, bespoke tailoring is one of life’s great sartorial delights. And now more than ever, there’s no reason why girls can’t get in on the fun.