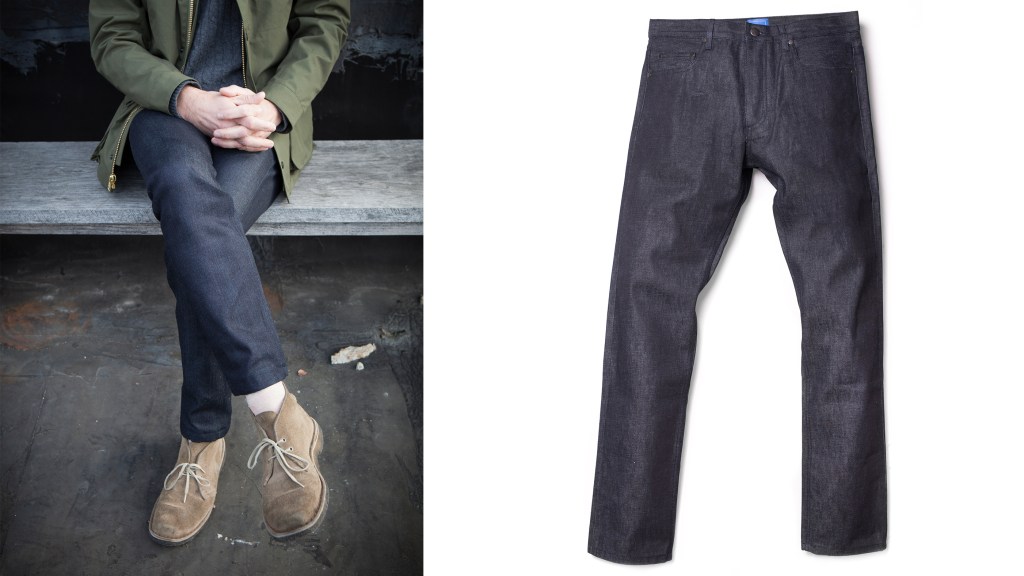 There’s no denying that casual wear has recently begun to eclipse traditional tailoring in the highest strata of luxury men’s fashion. Just take a look at the spring/summer 2018 collections from earlier this year; proper suits were a noticeable minority on the runway. Indeed, Hermès had just five, Prada a scant three, and Valentino none. However, even though there’s plenty of beautifully crafted off-duty attire stocking the shelves today, no tracksuit can rival the luxury of a good old-fashioned bespoke suit.

Luckily, made-to-measure and bespoke denim has emerged to bridge the gap between Savile Row and the street, offering a dressed-down take on first-rate tailoring. Recently introduced programs from heritage denim brands and traditional tailors take cues from the tenets of bespoke—think exacting fit, exceptional fabrics, and personalized details—and apply the same level of care to your jeans.

American denim titan Levi’s offers a bespoke service known as Lot No. 1 at its San Francisco, New York, and London flagships. The process begins with one of Levi’s master tailors guiding you through the 15 selvedge denims available, helping you pick from a wide variety of colors, textures, and weights that are sourced from mills around the world. Once the denim has been selected, you can choose your preferred thread, hardware, pocket style, and leather patch for the waistband. If you prefer a softer, more worn-in look, you can also elect to have your jeans enzyme- or stone-washed.

After the details of the style have been selected, measurements are taken, a pattern is hand-cut, and the jeans are assembled on-site within 4 to 6 weeks (from $750, with additional options like the enzyme- or stone-washed treatment starting at $950).

For a more tailored take on denim, head to Ermenegildo Zegna, which has expanded its made-to-measure service to include jeans that are fit and cut by the same tailors responsible for the brand’s esteemed suits. Although Zegna’s MTM denim is limited to two styles that can be tailored to your measurements, options for customization abound. There are six color varieties of Japanese denim, eight button options (including ultra-luxe horn), 18 different patches ranging from nubuck leather to pony hair, and several options for embroidered monograms with which to create your perfect pair of jeans. After just one fitting with Zegna’s expert tailors, the jeans are constructed in Italy and delivered within 5 weeks ($895).

Jake Mueser’s intimate haberdashery in New York’s West Village is best known for laid-back tailoring that marries a reverence for tradition with downtown ease. As such, bespoke jeans have been a part of Mueser’s bespoke range since he first opened J. Mueser in 2009. Offering a range of American, Italian, and Japanese denims that can be turned into any style of jean, Mueser notes, “The only thing limiting design details is your imagination!” He typically does about three fittings a month, and everything is hand-tailored in New York City (from $325).