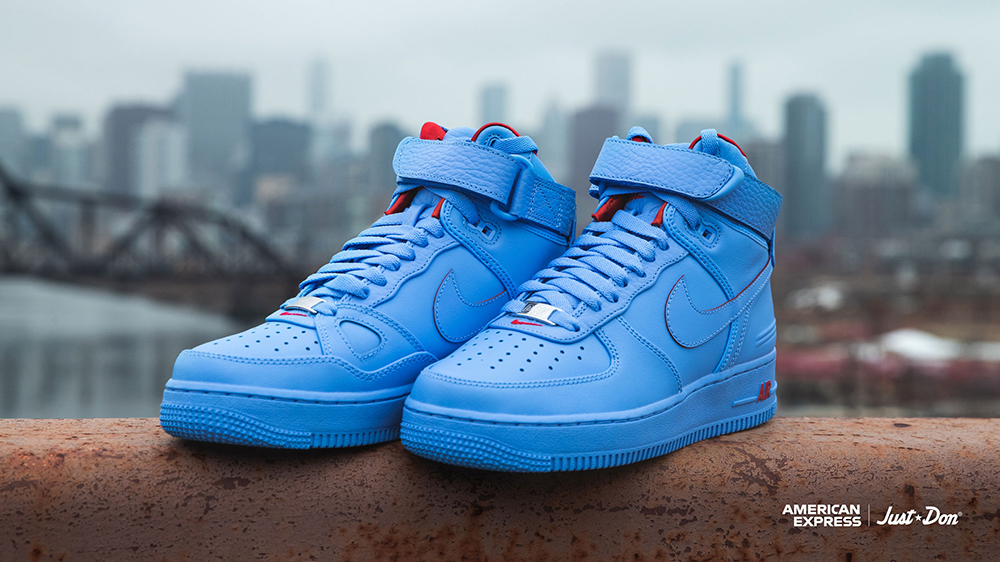 There’s no shortage of limited-edition interpretations of Nike’s iconic Air Force 1s. But the most recent pair, created by Chicago-based designer Don C, feels particularly noteworthy, because it also represents the first time American Express has worked on a sneaker collaboration.

The designer is the man behind cult brand Just Don, which has cultivated a loyal following drawn to its sporty aesthetic. (The designer founded his label in 2011 to put a luxurious spin on sportswear and it remains best known for its riffs on classic NBA franchise gear.) His new high-top version of the perennially stylish Air Force 1––dubbed the Nike Air Force 1 Hi Just Don—has a striking, ‘Amex’ blue palette accented with shots of deep red. It’s the kind of colorway you’d expect to find in his popular main collection, but it’s also a nod to his hometown’s flag.

“I hope when people see the sneaker’s design, color and texture, it ignites a feeling––I want everyone to feel the love a kid from Chicago has for his city,” the designer said in a statement. “It’s exciting to partner with American Express on a limited-edition sneaker for their card members, that is also a nod to the brand’s signature blue.”

The project came about when American Express was looking for a partner to help celebrate the NBA All-Star 2020 set to take place in the Windy City the weekend of February 14-16. “We are always looking to reimagine access,” said Deborah Curtis, American Express’s vice president of global brand partnerships and experiences. “Partnering with Don C on a limited-edition sneaker gave us an incredible opportunity to do just that for our card members, who may not be in Chicago for NBA All-Star.”

Only American Express card holders will be able to buy the sneakers, which will retail for $200 per pair. The limited-edition kicks officially release on Thursday on the brand’s website.