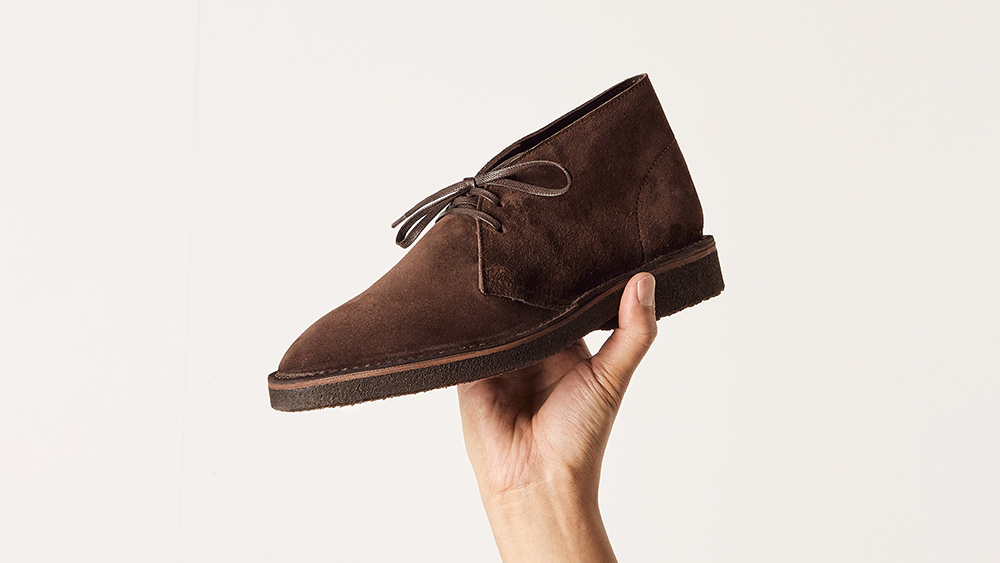 This past winter saw Anglo-Italian debut its very own desert boot, which is made in Italy with a low toe spring and profile that syncs with the brand’s casually elegant DNA. Now, that boot is available made-to-order, giving customers the freedom to select their preferred shade of suede and sole material before receiving a customized boot in four weeks’ time.

The desert boot itself has always sat somewhere between casual and business-casual, and its missing-link status may make it the perfect footwear choice for these in-between times. According to Anglo-Italian co-founder Jake Grantham, the boot’s last was developed to take advantage of both sides of the coin.

“We wanted a shoe that wasn’t dowdy or overly formal,” Grantham tells Robb Report. “By having the shoe sit flush to the floor, combined with an almond toe, it sits somewhere between a structured chukka and a typical desert boot, able to be paired with our type of neater denim or tailored trousers.”

The desert boot (£300) is available in over a dozen suedes with several sole options.  Anglo-Italian

As opposed to its ready-made desert boots, which are available in chocolate, forest, black, snuff and brown suede, for about $70 dollars more, the MTO iteration can be produced in more than a dozen Italian suedes ranging from ecru to slate gray. While diverse in color, their tones remain subtle, muted and conservative, in keeping with the label’s characteristically restrained palette.

Clients can also select either a light, dark or caramel crepe sole, or break tradition by choosing a lugged Vibram sole. “The fact that we construct the sole without any additional layering means that the Vibram accentuates the low profile of the shoe, producing a shoe that’s both robust and neat,” Grantham says.

In his own wear, Grantham enjoys matching black desert boots to high-twist charcoal trousers and a navy blazer or wearing a brown pair below a flannel suit. “They can, of course, be used casually too, but their power comes in softening more formal looks,” he says.

Anglo-Italian’s fresh interpretation and made-to-order offering may represent something new for the desert boot, but Grantham views it as a return to form. “This type of boot is something one would have seen our heroes wear in Milan in the 1980s,” he says. “Like much of what we do, we aren’t striving for newness—just the classics, done well.”