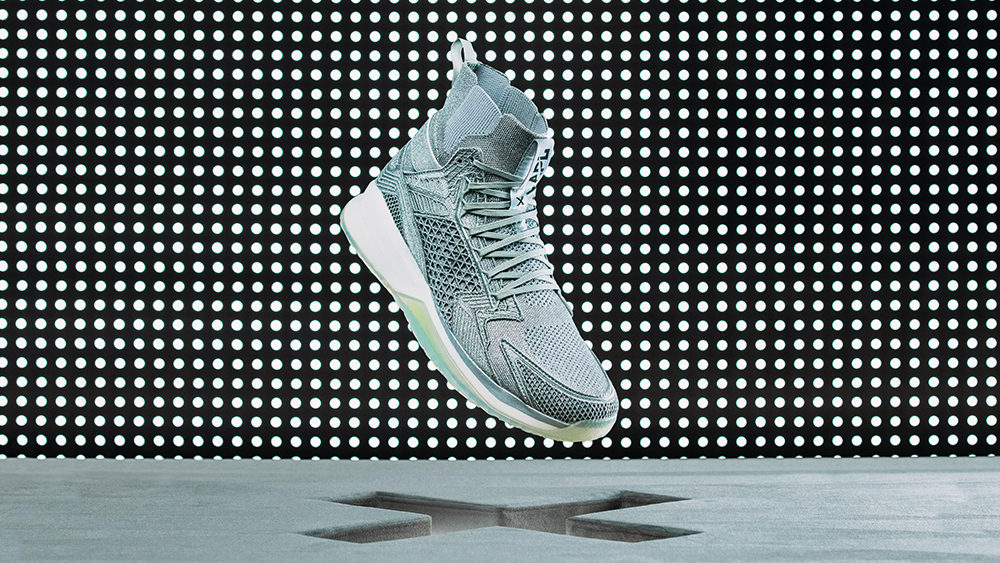 Forget “Do you even lift, bro?” The more challenging question is: can you jump? The quest to reach new heights on the basketball court led identical twin brothers Adam and Ryan Goldston to launch Athletic Propulsion Labs in 2010, when they created a sneaker with such unprecedented boost that it became the first shoe to be banned by the NBA for its performance-enhancing edge. Now, to celebrate 10 years of APL, they’re releasing two new designs that take that pioneering technology even higher. As Ryan tells us, the Superfuture and Concept X are the apotheoses of the brand’s first ground-breaking shoe: “We wanted to make it bigger, faster, stronger.”

The Goldstons know of what they speak. APL was born when the brothers were double athlete students at the University of Southern California, putting in time on both the football field and basketball court. As dedicated sportsmen, they were always looking for ways to up their game. Ryan also happened to be enrolled in USC’s entrepreneurial program, so he developed a business plan around creating sneakers engineered for optimal performance and crafted with an eye for luxury. While he recalls that the plan was panned by his professors, the brothers weren’t deterred.

Without any formal training in shoe design, they set about creating a sneaker informed by their experience as athletes. “We broke it down into ‘What part of your foot do you explode off of?’” Ryan says. “We broke down each of the variables that would work in our favor.”

Their biggest breakthrough was inserting a compression spring beneath the ball of the foot—effectively amplifying the natural spring that propels one to reach the net. After rounds of research and development while still in school, their first design—the APL Concept 1—came to fruition about a year after they’d graduated. It didn’t take long for the innovative technology to start making waves.

“We’re self-funded, so we had a super limited…I wouldn’t even call it a marketing budget,” Ryan recalls. As lifelong basketball fans, they knew the most effective way to reach their audience was Slam magazine—a hoopster bible for everyone from middle-school hopefuls to NBA pros. They invested what budget they had in one double-page ad: a silhouetted figure, the brand’s website and the words “Stop Dreaming, Jump Higher.” The investment proved to be a wise one. Soon after it was published, they began fielding requests from NBA players, NBA agents and even NBA players’ moms wanting to get APL’s shoes on the most respected athletes in the game.

Pretty soon, the NBA itself reached out to get the shoes approved for official games. “Normally, it’s just a formality,” Ryan tells us. “They said we’d get an answer in 24 to 48 hours.” But after presenting the shoes and the attendant schematics, months went by until the Goldstons got their answer: the Concept 1 offered an undue competitive advantage—the language most commonly associated with performance-enhancing drugs—and was banned from all NBA teams and functions. While the news could be seen as a crushing blow, it was a slam dunk for APL. For the first time ever, a shoe was deemed too good for the NBA. Infamy has its merits.

It wasn’t just sneakerheads and basketball fans that flocked to APL. “There’s a large amount of NBA guys and WNBA players that do wear our shoes,” Ryan admits. “We just can’t talk about it since a lot of them have contracts. But, we can’t stop anyone from buying our shoes.”

In the years since their blockbuster debut, APL has built an entire range of shoes on the same principles of performance-minded technology and elevated aesthetics. And to commemorate 10 years of cutting-edge kicks, they’re revisiting their first design in two sneakers that up the ante on the original.

The Superfuture features the same system of eight compression springs that powered the Concept 1, but rendered with a decade’s worth of refinement. The knit upper combines synthetic overlays and elastic straps for superior support, while a padded heel tab and Velcro strap allow for a more customized fit and improved stability. It also introduces a new proprietary foam midsole that offers maximum bounce.

The Concept X synthesizes everything the brand has gleaned over its first ten years into one superlative sneaker. “We’re very inspired by the auto industry,” Ryan notes, “so we wanted to create our version of a hypercar—a hypershoe.” That translates to a carbon fiber plate running the length of the sole, to transfer energy from the heel to the forefoot. It sits atop a system of 10 larger coils for an even greater bounce. It also features the new foam midsole and the brand’s first single-piece knit bootie upper.

If the Concept 1 was considered performance-enhancing, we can only imagine what the NBA would have to say about the Concept X. While they may not be embraced by the athletic establishment, APL’s innovations are very good news for your next workout.