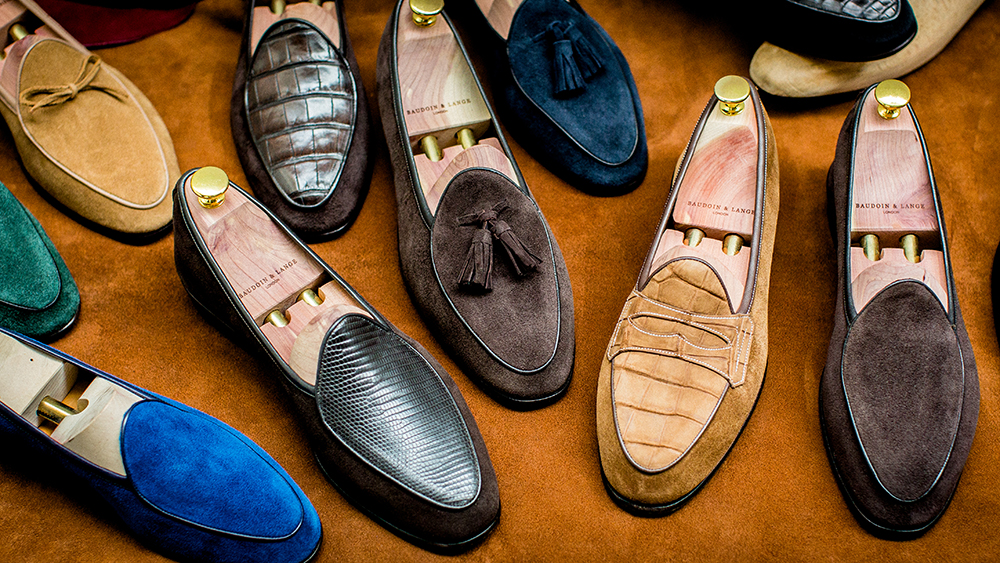 If you tried to guess what Allan Baudoin and Bo Van Langeveld did before they started making shoes, you might not assume that one was an analyst at Apple and the other was a racecar driver.

Today, the pair are co-owners of artisanal British shoemaker Baudoin & Lange, whose workshop in London’s east end turns out luxurious Belgian loafers with a well-earned reputation for quality. Their signature shoe is called the Sagan—named after Carl Sagan, the late French astrophysicist—and since the brand’s launch four years ago, it has become a cult favorite of menswear aficionados across the globe, stocked in Barneys, Harrods, Selfridges and others among the world’s foremost department stores. The Sagan takes the form of an unstructured lamb’s suede slipper, which to quote Baudoin & Lange’s website, “wraps around your foot like a glove”.

The pair met in 2016, when Van Langeveld had given up on life in the fast lane and migrated into finance, and Baudoin had quit his job in tech to become an apprentice shoemaker. “I was looking for radical change in my life,” he told Robb Report. Baudoin’s experiments resulted in a prototype of a comfortable suede office shoe with the minimum of structure, something that Van Langeveld was looking for at the time.

“I was already thinking that there was a gap in the market for a truly comfortable dress shoe design, which just so happened to be a foundational feature of Allan’s unlined Sagan loafer,” Van Langeveld said. “After a meticulous few months of testing and structural improvements, we eventually came up with a product that we felt questioned the status quo of the dress shoe.”

Certainly, the Sagan is a clever design. While it feels as smart as a traditional shoe, its unstructured uppers and slim soles ensure that it’s considerably more flexible than its Goodyear welted counterparts. This lack of structure isn’t always an advantage; spend a day in them pounding pavements and you might wish for something a little more substantial, but as office slippers or weekend loafers, Sagans are pretty unbeatable.

“Our aim is to blend an artisanal approach to our product with modern design,” says Baudoin. “Bo and I share a passion for craftsmanship, and we understand that creating a loafer that will perform well over time is a complex process.”

It’s taken the pair years to hone the Sagan enough that Baudoin felt comfortable tinkering with his formula. But now that the Classic Sagan has found its feet (so to speak) variants on the design are coming thick and fast. The shoe (which ranges in price from £325 for suede to £4,400 for an alligator version, roughly $400 to $5,400 at current exchange) is now available in over a dozen different colors. You also have a choice of plain uppers, tassels, bows or even penny loafer straps across the bridge of the foot.

Most recently, Baudoin and Van Langeveld unveiled the Sagan Grand, a structured variant of the original made with thicker soles in soft French calf’s leather. These are more supportive than Classic Sagans and sit in that satisfying place between a stiff welted shoe and a soft Belgian loafer—with padded footbeds and cushioned arch supports. If the Classic Sagan is an office shoe to keep under your desk, the Sagan Grand is a smart shoe to wear around town. “The style mixes English shoemaking tradition with a Parisian aesthetic”, explains Baudoin. It’s an unusual formula for sure, but it works.

Baudoin & Lange might be a young brand, but its fresh approach and smart designs are treading a firm path to success.

“We try to always put our best foot forward, and to create shoes that can withstand the demands of modern life,” says Van Langeveld, with a twinkle in his eye. “We can’t promise that the Sagan will solve all your wardrobe problems, but it might help.”