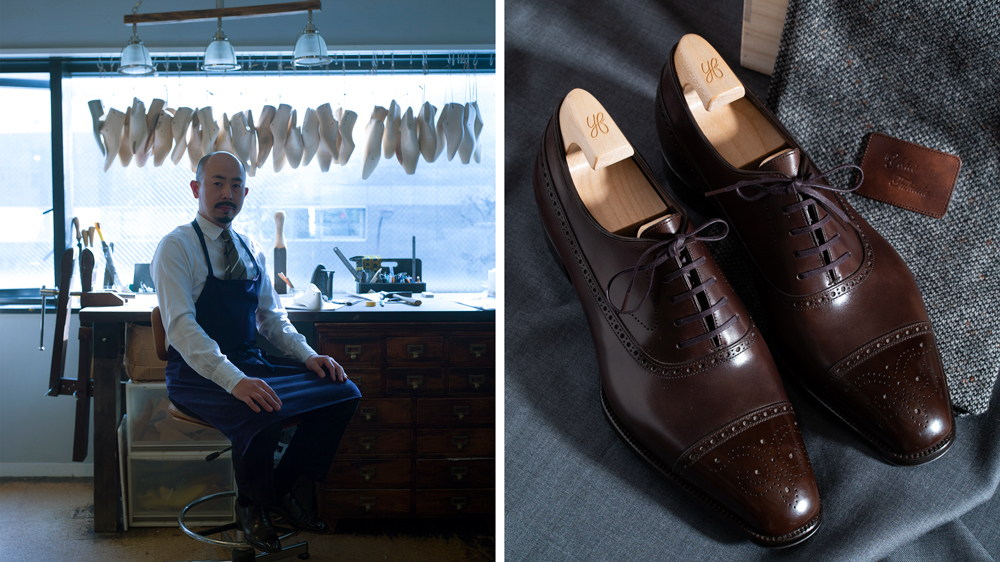 Tokyo’s Yohei Fukuda’s bespoke shoes are considered by the well-heeled, to be among the most coveted on the planet. His shoes are instantly recognizable as a cut above the rest thanks to his impeccable attention to detail. He honed his classic cordwaining skills in the ateliers of London’s most esteemed shoemakers including John Lobb, Forsun & Son, and George Cleverly. His process is so painstaking, Fukuada and his five apprentices only make 10 pairs per month. With over 200 pairs currently on back order, Fukuda’s bespoke shoes come with a three-year-long wait list. His bespoke shoes start at $4,600 and go all the way up to $12,000 in exotic skins . . . and you’ll have to travel to Tokyo or Hong Kong to get a pair made. In the meantime, The Armoury in New York City is carrying ready-to-wear ($2,300) and made-to-order (from $2,700) shoes made by Fukuda in collaboration with The Armoury’s founder Mark Cho.

We caught up with Fukuda, during his first-ever visit to New York City this fall. It turns out the shoemaking wizard stepped into his cordwaining career entirely by accident, kickstarted by a break-up and a visit to a North Hampton shoe museum.

How did you get started making shoes?
When I was 18, I had a girlfriend who was going to study abroad in Los Angeles. I decided to follow her, but after we got to L.A. we broke up. I had already told everyone I was going to the U.S., so I decided I would go to England instead to learn English. When I was in school in London, I had a classmate that wanted to be a shoe designer. We went to see the shoe museum in North Hampton and I saw a beautiful pair of black oxford shoes from 1910. I was so inspired. I thought, ‘It’s so nice to impress people like that.’ But initially, I was just interested in making shoes like this for myself. Eventually, I became a student at the shoe college.

What sparked your interest in the bespoke niche?
I had the opportunity to get a part-time job at John Lobb. I worked in their shoe factory and while I was there I bought 10 pairs of shoes for a discounted price. But I have very wide, short feet. At 21 I couldn’t afford to order a pair of bespoke shoes, so that’s when I figured it would be a good idea to learn how to make my own.

How long did it take you to learn the bespoke process?
People say it takes around three years to learn just. But I was lucky, when I was a second year student at the shoe college, I had an opportunity to learn bespoke shoemaking from the best shoemakers in London—John Lobb, Foster & Son, and George Cleverly. I used to learn three hours a week for six months and while I was a student I made two pairs of shoes by hand. I started doing repair jobs for George Cleverly. I worked for him for three years. I lived in Northampton and I would come down to London once a week to get shoes from him to repair. My skills got better. I showed by sample shoes to Edward Green and they let me make my first real pair of bespoke shoes for them. That’s how it all started.

When did you decide to venture off on your own?
I lived in England for six years and then I came back to my hometown in Japan in 2006. At that time there were not many bespoke shoe companies in Japan, and I didn’t want to work for another shoe company, so I decided I could start my own company in Tokyo. It was very small in the beginning. I didn’t have a website or any retail space. I was just working from home. I was wondering why nobody came or contacted me. [Laughs]

When did your business start to take off?
A journalist friend of mine wrote a story about me 10 years ago, and a jewelry and watch store contacted me to do a trunk show. One of the clients that came in was from the Isetan department store in Shinjuku in Tokyo, and asked to display my shoes there. I had so many customers there that I decided to move to Tokyo and open up a store about eight years ago. I started my Facebook and Instagram two and a half years ago and did some practice photography by myself. I wanted to introduce good Japanese-made shoes to the world, because they are not well-known [Fukuda now has over 94,000 Instagram followers @yoheifukudashoemaker].

What qualifies as Japanese-made shoes?
I think Japanese shoemakers pay more attention to small details. If you think about cars, cameras, or clothes—these are not products that Japanese have invented, but we have made them better. I think this is something we are quite good at.

What are the signature style details in your shoes?
Our house style is a Balmoral oxford. This isn’t a new style, but we don’t intend to make a shoe that’s about fashion. I want my shoes to be classic so the customer can wear them for 20 or 30 years. Details include a long vamp, punched cap, sweeping lines, hand-lasting, and a shape created through the arch that is impossible to create with machine welting.

How long does the process of creating a bespoke shoe take?
We take so many orders for our bespoke shoes, but we can only make about 10 pairs of bespoke shoes per month. We already have 220 pairs on back order. The wait time currently is around three years.

What is considered the top-end of your bespoke shoemaking?
Typically something in a skin, like alligator, which can run up to $12,000.

The Armoury is the only boutique in the U.S. that sells your shoes. How did you start working with them?
About five or six years ago Mark Cho of The Armoury came to my store as a customer. But he kept coming to the store like once a month. [Laughs] We became good friends and one day he asked me if I wanted to do a trunk show at his Hong Kong store. I didn’t know about it, but I said yes, because it was exiting to do a trunk show in a foreign country. That’s how I started working with The Armoury.

What do you envision for the future of your business?
I have only five apprentices in my workshop, so my company is still quite small. A lot of young people want to become bespoke shoemakers in Japan, so I think the future is quite bright but we don’t want to expand too much. We really want to be able to focus with the utmost detail on the quality of our shoemaking.