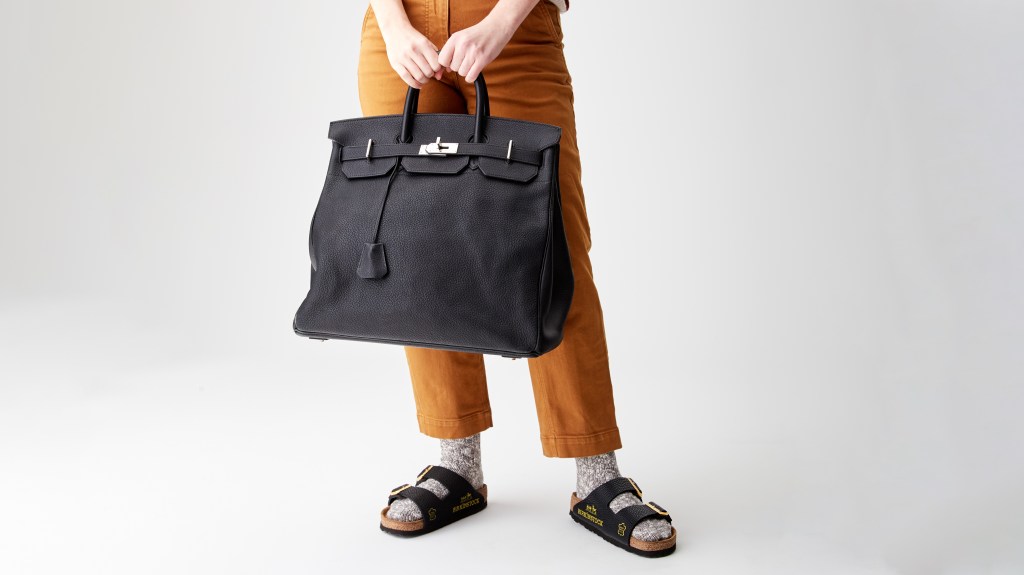 Save for phonetics, there’s not much the humble Birkenstock has in common with the coveted Hermès Birkin. The hippie-dippie sandals retail for roughly $100 a pop, while the Holy Grail of handbags routinely attracts six-figures. Still, one creative collective has decided to combine the two in quite the shoe.

Allow us to introduce you to the “Birkinstock.” Designed by the Brooklyn-based outfit MSCHF, the ultra-luxe sandals feature Birkenstock’s signature leather and cork footbed with an upper that’s crafted from, you guessed it, deconstructed prized Birkin bags. As to be expected, each pair demands a pretty penny and is priced between $35,000 and $76,000.

The divisive kicks have already caused quite the stir on social media, though that’s precisely the point. MSCHF, which The New York Times describes as the Banksys of consumer culture, was also behind the infamous Jesus shoe (custom Nikes reportedly filled with 60cc of Holy Water) and have a rep for pushing boundaries.

“We’re just sort of fascinated with destroying expensive things and creating something new out of them,” Daniel Greenberg, MSCHF’s head of strategy told the Times.

That’s not to say the chopping is not considered. In fact, the Birks come with a detailed “manifesto” in which the collective explains the idea behind the design that it deems a “transubstantiation.”

“Today, Birkin bags appreciate with an average 14 percent annual return, consistently beating the S&P 500—by this metric, just as gold, though shiny, is no longer the basis of currency, we can look to the Birkin bag itself as the new luxury raw material par excellence,” the manifesto reads.

Both Future and Kehlani have already snapped up a pair.  MSCHF

Indeed, a recent report published by Art Market Research (AMR) showed that a Birkin will bring you better returns than a Banksy. Coincidentally, MSCHF has a VIP list of art collectors and celebrities who get early access to the creations. The Times reports that three pairs of Birkinstocks have already been sold to A-Listers, including rapper Future, singer-songwriter Kehlani and an unnamed art collector.

So, how do mere mortals get a pair? MSCHF is making the Birkinstocks to order and you can contact the company to discuss availability and price.

It may not be too long before we see more luxury Birkenstocks on the street, either. WWD recently reported that L Catterton and LVMH are looking to invest in the German company and bring some extra high-end savvy to the brand. The sandals have certainly come a long way since the ’70s.