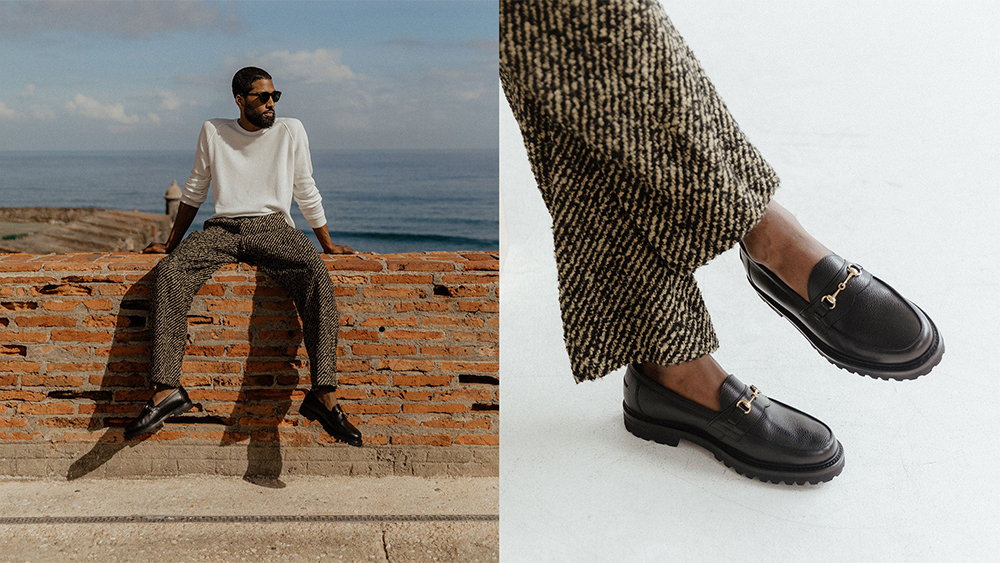 The bit loafer is a shoe that comes with its own hardware—and cultural baggage.

First introduced by Gucci—whose name remains synonymous with the style—in 1953, its design matched the easy-going charm of the Norwegian (aka “Weejun”) loafer that had conquered American college campuses to an equestrian-inspired “bit” detail. This fusion of established Ivy Style canon and aristocratic sporting accessory made it an instant hit with moneyed (or, moneyed-aspiring) consumers. Just consider that it is listed as essential kit by both The Official Preppy Handbook and The Official Sloane Ranger Handbook.

As a result, bit loafers are popular but divisive—the footwear choice of rich-kid bullies in ‘80s teen movies. Gucci continues to sell its original 1953 model, whose design has inspired similar iterations from makers like Rancourt and Jay Butler. But 69 years after the shoe’s debut, a fresh crop of footwear designers are taking the bit loafer in a new direction.

Modern-day Slone Rangers can be outfitted by Horatio, a London-based footwear label whose Beaufoy bit loafer is available in 20 different makes. “We’ve always been mega fans of bit loafers,” co-founder Billy Prendergast tells Robb Report. “My dad collected vintage ones in the ‘80s and radically re-styled them with denim in the Ray Petri, early i-D days, so the DNA has always been there.”

In keeping with his father’s more eclectic stylings, Prendergast’s bits are classic in silhouette but venture into materials including pink suede, faux leopard and a multi-colored suede.  “We generally try and have a bit of fun with them,” Prendergast continues. “The classic footwear business can be double-stuffy, hank-in-the-pocket types which is not so much our vibe.”

But for Prendergast, making the bit more accessible isn’t only a matter of faux snake leather—it’s also an attitude. “Whether it be the construction, fabrics, people we partner with, the way we style them or how we batter them up, we try and go against that—democratizing them, to an extent. We’re more than happy how the ‘classic’ lads wear them; but if you’re not, that’s super cool, too. Trackpants or bespoke strides, it’s no bother to us.”

Two takes on the bit loafer by Horatio ($273 each).  Horatio

A similar spirit can be found at Blackstock & Weber, a New York-based brand that bulks its loafers up with chunky double-leather or lugged Vibram soles. Both have been used to make its Mason horse-bit loafer, which provides what founder Chris Echevarria calls “curb appeal.”

“It was often seen as this very WASP-y, very preppy kind of thing, or it was crafted in a very European way,” Echevarria says of the loafer generally. “But I felt like there was another perspective here that could help carry this into the wardrobes of younger consumers.”

Like Horatio, Blackstock & Weber isn’t afraid to go gonzo, dabbling in blue crocodile, textured “bark” suede and spotted pony hair. Accordingly, Echevarria grants the Mason a wide remit in styling terms. “I’ll wear it with anything from sweatpants to shorts to denim to my friend’s wedding… whatever feels the most comfortable that day,” he says.

New York designer F.E. Castleberry has placed the bit in his sights before, creating a snaffle bit lug loafer that’s made in England according to an old maxim of David Bowie’s: “With a suit, always wear big British shoes, the ones with large welts. There’s nothing worse than dainty little Italian jobs at the end of the leg line.”

Accordingly, the Northampton-made shoe sits atop a mighty Vibram Vi-Lite lug sole. The original iteration was made from black high-shine leather; a pre-order for a color-blocked calfskin design launches on June 1st.

But no matter how far his design may veer from the original, Castleberry remains reverent to where it all began. “No men’s shoe tight-walks the wire between craftsmanship and luxury quite like the original Gucci horsebit loafer,” he says. “I’m drawn to the casual elegance of the shoe… its preppy equestrian underpinnings. It’s quite clever yet aspirational.”