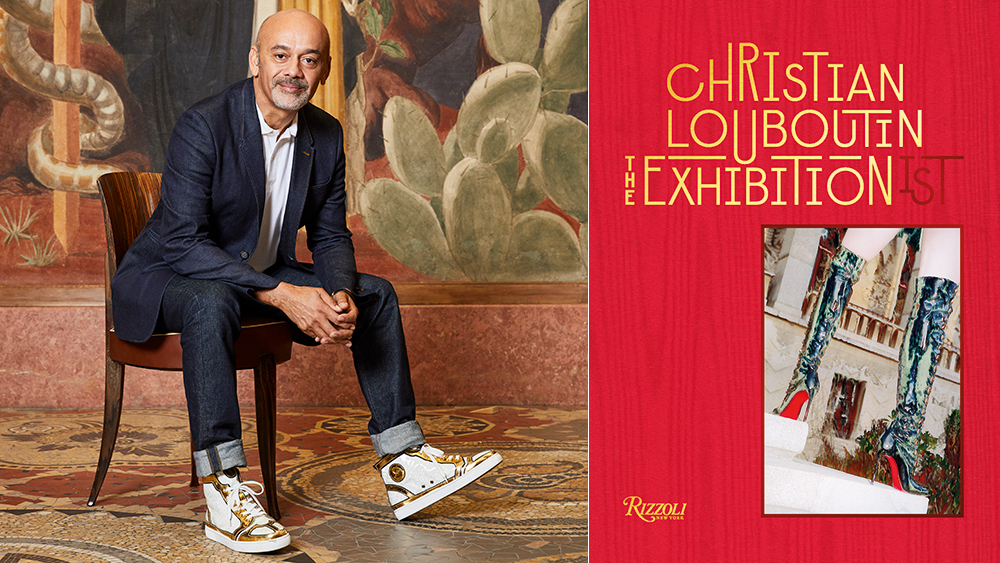 Women aren’t alone in coveting Christian Louboutin’s iconic red soles. The late Kobe Bryant was a self-professed fan, and Houston Texans QB Deshaun Watson made headlines when he turned up at the 2017 NFL Draft in the designer’s $1,995 Dandy Pik Pik smoking slippers, embellished with the spikes that have become a signature of a Louboutin men’s shoe.

Guys who love Louboutin indeed have athletes to thank for his decision in 2011 to launch a men’s collection as the follow-up to his phenomenally successful women’s label. “When men first came to me for custom looks, it was athletes who seemed to have a real fascination for my shoes,” Louboutin says. “And only after that came singers and actors. I had never put the two together, but later I realized that athletes are like any other type of performer; just like an actor, they deliver a show. That’s why they respond to the idea of theater in my designs.”

Louboutin has combined his love of performance, sport, art and craft in L’Exhibition[niste], a just-opened retrospective in Paris. The choice of venue also was highly personal: the Palais de la Porte Dorée, an exhibition space located in the city’s 12th arrondissement, where Louboutin grew up. When he was 10 years old, Louboutin fell in love with the Art Deco building, which at the time housed a tropical aquarium and the Museum of African and Oceanic Arts. The aquarium is still there, but the museum, which spawned Louboutin’s curiosity for travel and diverse cultures, was merged into the Musee du Quai Branly in 2003. “It was in this place where I learned that different cultures and civilizations could have different points of view,” Louboutin points out.

Left, Louboutin’s sketch of a “no high heels sign” he saw as a child at the museum; right, his current design drawings reference that early memory.  Christian Louboutin

A sign featuring an illustration of a woman’s stiletto, a request that women consider the damage their heels might inflict upon the museum’s floors, likewise played an integral role in Louboutin’s life and career. A young Christian became fascinated by that sign in the Palais during his visits, and it’s no accident that his own design sketches still take their cue from that illustration. “My sketches are always in profile from that side, or from three-quarters view—that’s my evolution in 40 years,” the 57-year-old designer says with a laugh.

Curator Olivier Gabet sifted through Louboutin’s considerable archives to cull the exhibition’s comprehensive selection of designs—some never seen outside his atelier until now. A section of the exhibit dubbed “the Pop Corridor,” meanwhile, showcases his work for entertainers, from the custom shoes Louboutin designed for Prince to the Cousin Greg patent-leather oxfords Leonardo DiCaprio wore to the 2016 Academy Awards.

Before he opened his atelier in 1992, Louboutin’s career included an early stint working backstage at the Folies Bergère, the famed Parisian cabaret known for its alluring showgirls. With that in mind, other rooms in L’Exhibition[niste]” – the double entendre is intentional—pay tribute to the shoe as a subject of ardor or seduction, with Louboutin’s close friend and longtime client, burlesque dancer Dita von Teese, performing as a hologram on a colorful stage handcrafted in Bhutan. The designer’s passion for handcraft also plays a role in the artists he and Gabet enlisted to create a variety of collaborations, from a spotlight on miniatures by Pakistani artist Imran Qureshi to a series of nine nude sculptures of the female form by British design duo Patrick Whitaker and Keir Malem, crafted in leather in a range of skin tones and positioned amid the Nudes collection Louboutin launched in 2006.

While L’Exhibition[niste] may travel to other cities after it wraps in late July, Louboutin says the Palais de la Porte Dorée will be the only Parisian venue to host his work. “Over the years other places around Paris had been proposed, but nothing spoke to me,” he says. “I know now that I had been waiting to realize that this would be the place.”

L’Exhibition[niste] is on view at the Palais de la Porte Dorée through July 26th.