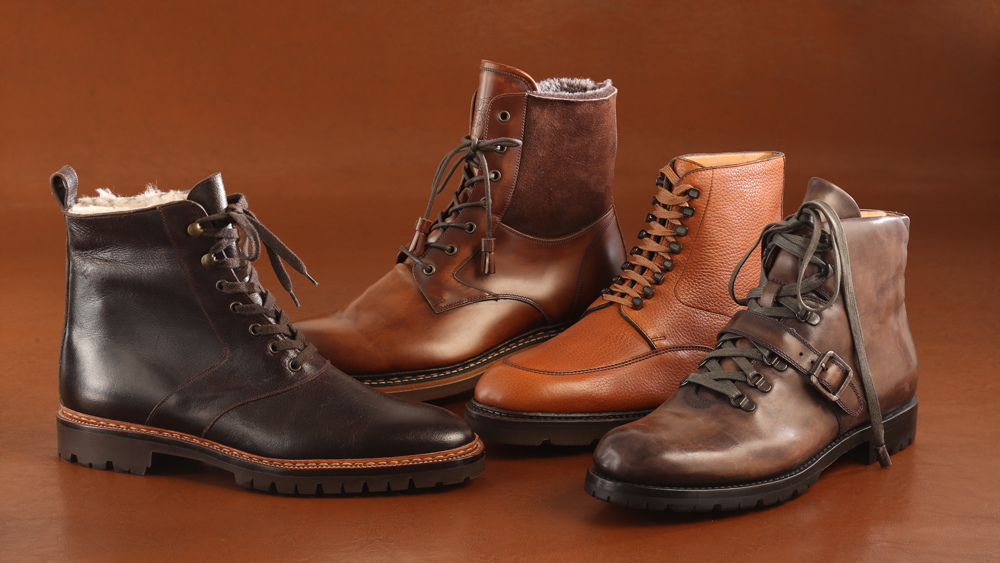 Luxury shoemakers have been going the extra mile with their boots this season. Rugged leather hiking boots are already out pounding the pavement as we head deeper into fall; some of the best examples, naturally, come from Berluti, John Lobb, Bruno Magli and Stefano Bemer. Pebble grain leathers, lightweight soles, suede accents, and horsefront leather are just a few of the details incorporated into the season’s best boots. Stefano Bemer and Bruno Magli stepped up the footwear trend with an added functional touch—the Italian shoemakers already have you covered for winter with their extra-warm shearling-lined versions.

And while you wouldn’t want to necessarily put your hard-earned Lobbs, Maglis, Bemers or Berlutis to the test, rest assured these luxurious leather accessories are built to last—even on tough terrain. And, hey, breaking in that beautiful leather will only deepen their appeal.

Stefano Bemer quietly made a name for himself as one of Florence’s best bespoke shoemakers. After his passing, fellow Florentine Tommaso Melani took over the shoemaker’s business and has been making it more accessible by offering made-to-order and ready-to-wear, while staying true to the craftsmanship that kept Bemer a best kept secret among those in-the-know. Some Stefano Bemer clients are known to own one of every pair.

These 7500 boots (1,300 euros or $1,473) are a perfect example of the brand’s craftsmanship. The boots are shaped over the brand’s T last, which makes for a more comfortable fit and wears well on men with a low instep. Inside its rich, chocolate brown horsefront leather the boot is insulated with shearling to keep you warm during the upcoming bitter months. Wear them with grey wool trousers or dark denim for a versatile winter look that can be dressed up or down.

If you are in the market for a lighter leather, Bruno Magli’s Caruso boots ($695, available in-store only at Bruno Magli’s Soho boutique, 646-688-4023) lined in a light grey shearling are a handsome alternative to Stefano Bemer’s darker hued version with cream colored shearling. These boots come up higher above the ankle, which is ideal during the winter months if you’re a fan of the cropped pant look. It’s tassle-tipped laces, gradient patina, and suede accents at the ankle are dressier finishes, but the rubber Lactae Hevea soles—a hard-wearing material made from pure virgin hevea milk in the maker’s “country” style grip—ensures these aren’t too precious for a little outdoor wear and tear.

While its derby lace-ups, monk straps, and loafers are John Lobb’s bread and butter, the brand’s boots this season are the real eye-catchers. The pebble grain leather of its tan-colored Helston boots ($1,630) comes is contrasted with subtle black anthracite ski hooks that play on the hiking boot look. The good news is, unlike other boots with hook lacing, these will look as good in the hills of Jackson Hole, as they will on the city streets.

The boots are also made with a lightweight walking sole that won’t weigh you down whether you’re trekking up a mountain or pounding the concrete jungle. The Helston boots also come in a burgundy russet or black.

The Brunico boot was first introduced in 2011 and was inspired by a boot the brand designed for silver screen siren Greta Garbo in the 1950s. But make no mistake, these are built for the modern day rugged man. You might not be climbing Mount Everest in a pair of Berluti Burnicos ($2,350), but you will certainly look the part perched beneath the slopes après-ski, whether you’re in Aspen or the Alps.

In true Berluti style, these sharp boots feature all the bells and whistles of the Parisian house’s rich artisanal expertise. The Brunicos have a Goodyear welt, with the brand’s signature Bolzano last, handsewn stop stitches on the upper, anti-oxidations treated metal D-rings and foam reinforcements at the ankle.