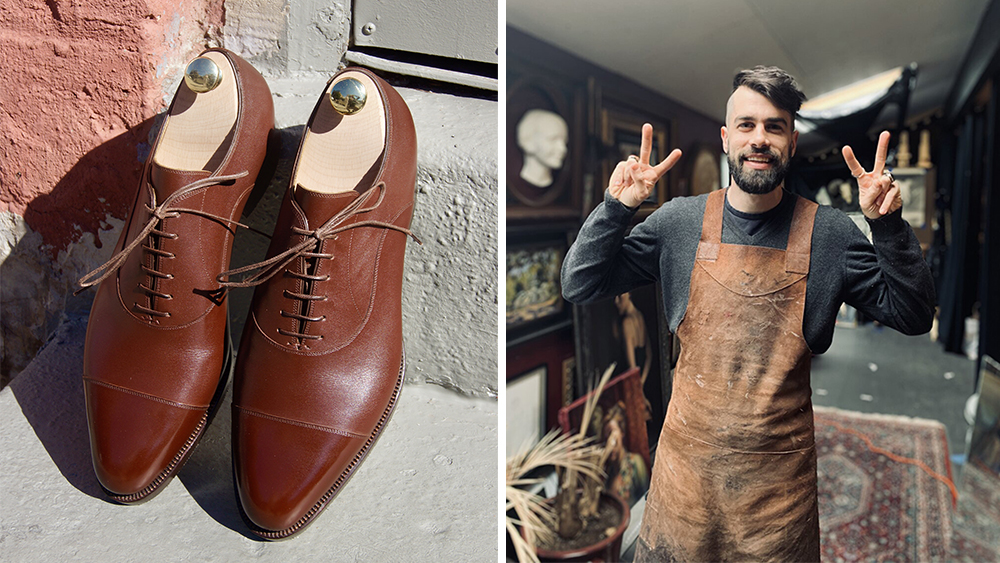 Francis Waplinger may have traveled far and wide to learn the craft of shoemaking, but in a sense, he has landed where he started.

It wasn’t just the thrill of athleticism that drew the Seattle area native, who grew up skateboarding and playing soccer, to sports. It was the footwear—specifically, the skate shoes and soccer cleats that filled the pages of sporting goods catalogs. The obsession stuck through high school when he started airbrushing black sneakers in different colors. Later, at the suggestion of a family friend, he attended a one-week course that introduced him to the world of shoemaking. Although he didn’t know it then, it was a week that would kick start his professional life.

“When I was there, everyone kept saying, if you have fun here, you got to check out this other guy,” he recalls. The other guy turned out to be Marcell Mrsan, a Hungarian cobbler who conducted shoemaking workshops in Brooklyn. Attending the program, Waplinger immediately knew he’d found his calling. “I was hooked,” he says. “I was like, where do I go? How do I learn more? I need instruction. I need guidance!”

Waplinger would eventually get that guidance, but not before earning a degree in interior design at Savannah College of Art and Design (accessory design did not become a major until his senior year). Realizing a career in that field would require more time sitting in front of a computer than getting his hands dirty, he decided to return to his first love. Going all in, he headed to Florence, Italy where he spent two years studying shoemaking under a master shoemaker and one year apprenticing for another. Eventually, Waplinger’s skill was such that he himself began teaching.

The experience abroad informs the way he makes shoes today. “I came back from Italy and I felt so Italian,” he laughs. “I spoke a little Italian and then I realized, ‘Oh, I’m not Italian!’  But how I construct shoes, it’s a very Italian tradition, because if you learn in England, Italy, Germany, Japan—they use different techniques.”

Executing those techniques is a big part of what appeals to him. “Shoemaking is quite physically demanding, and I like that aspect of it,” he says. In addition to the grunt work, which can take up to 140 hours per pair, Waplinger says he’s also drawn to both the craft’s balance of style and utility. “A shoe is functional. You put it on your feet, you wear it around, it protects and supports your feet on man-made surfaces like New York City sidewalks,” he says. “At the same time, with bespoke shoes, there’s an aspect of beauty you’re trying to capture.”

A pair of his bespoke shoes costs around $3,200, not including the last which is generally a one-time fee of $300. A made-to-order pair is slightly less at about $2,500. The process unusually involves two, possibly three fittings and involves the making of a pair of test shoes to ensure fit. Although Waplinger can accommodate most design requests, he refers to his preferred style as New American Classic and draws on traditional American brands like Florsheim, Nunn-Bush and Nettleson for inspiration.

“Some of those designs—people just don’t do them anymore,” he says, noting the particular shape of the toes and the overall silhouette. “I’m not doing the exact same design but a kind of spin on them.” Vintage style, in general, is a continuous source of inspiration. “When I think of Americana, I think of the romantic ideas of America,” he explains. “Jet-setters, Pan-Am, the Empire State Building, the whole Art Deco movement and the Roaring ’20s.”

Ultimately, Waplinger says, it’s not even the shoes that bring him the greatest joy:  “Working with the client and having them put their trust in me to make a shoe that is comfortable and beautiful that they enjoy wearing… It’s terrific.” Although he’s toyed with the idea of incorporating more products in his wheelhouse, he says that, for now, he’s staying “laser-focused” on making the best possible bespoke shoes. For the young shoemaker, it’s clear, this is less a profession than a vocation: “In my mind, there are no other options. I have to do this.”