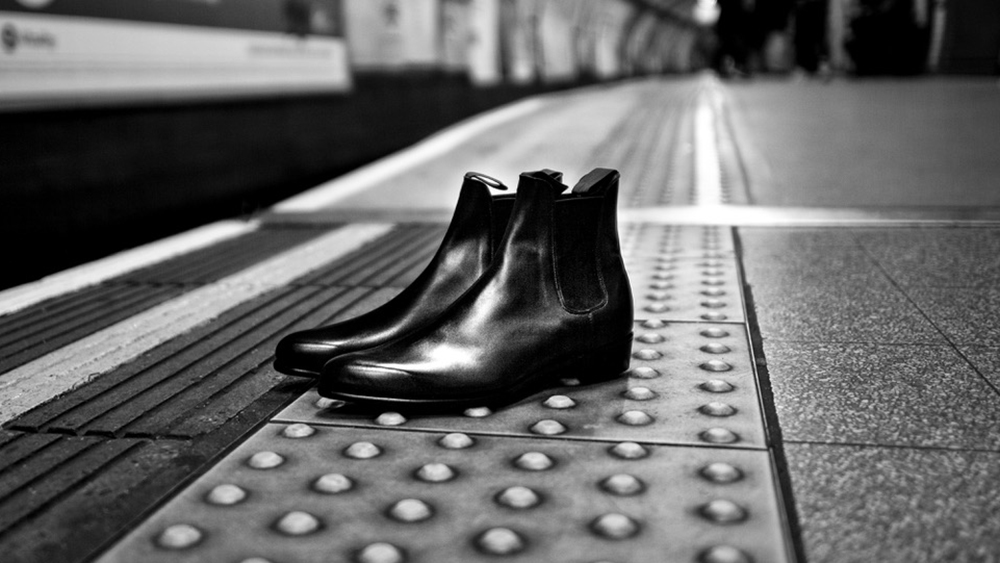 It counts Jason Statham, Kenneth Branagh and Sly Stallone amongst its regular customers. It has provided footwear for movies including Murder on the Orient Express, the Kingsman franchise (the third instalment of which it is working on now, along with The Fast & the Furious spin-off Hobbs & Shaw) and Phantom Thread—in which company chairman George Glasgow, Sr. had a cameo role as Daniel Day-Lewis’s character’s advisor (Glasgow Sr’s next acting outing will come in Paul Feig’s new film Last Christmas starring Emilia Clarke due for release in November, 2019).

It’s fair to say that bespoke London shoemaker George Cleverley is the leading shoemaker for the silver screen: and the house’s next Hollywood outing might be its most exciting to date. The elegantly retro footwear you see above you has been made for Rocketman—the forthcoming Elton John biopic, co-produced by Matthew Vaughan and directed by Dexter Fletcher.

The boot in question—a limited-edition black calf style—is a winkle-picker: a rock and roll staple of the ’50s which Elton John would have worn when he began his journey towards sartorial extravagance upon leaving home and, with it, his highly conservative parents. (The movie examines the music legend’s early life and career – we’re guessing Cleverley wouldn’t have been up for making a pair of comically oversized DMs like he wore as the Pinball Wizard in Ken Russell and The Who’s 1975 flick Tommy.)

A pair of George Cleverly boots made in homage of the ’50s style worn by Elton John.  Alan Schaller

“The winkle-picker is a style of shoe has never been what we’ve been known for,” says George Cleverley CEO George Glasgow, Jr. “We’ve made loads of Chelsea boots and jodhpur boots and Beatle boots, but nothing like this. So we had to go back to the archives. We looked at the history of the winkle-picker boot, including its last. We looked at Elton John’s original collection of shoes and developed an entirely brand new last and pattern. We wanted to make sure that we were on point and making the same thing.”

While authenticity was a major priority, Glasgow Jr says, a few artisanal flourishes here and there make this modern-day winkle-picker a more craft-based option. “Old winkle-picker tended to have a seam at the front of the boot where the in-step is; we wanted to make something more hand-worked and seamless, so it’s all made from a single piece of leather. Shoemakers often put large seams at the front of a boot as it was a way to utilize the leather available. We wanted to keep it true to Elton John and what he wore, and to the style that was popular in those days, but also incorporate our own heritage and make something that much better.”

Initially—and in keeping with John’s own ’50s preferences—the boot will be released in black calf. “It has a stunning fiddleback waist, pitched Cuban heel and pull-on loops at the top to help you get in and out of them,” says Glasgow Jr. “It may be introduced again in another colour further down the road.” That initial run of these limited edition boots (around £600 or $800) will launch around the time of the movie, in late May, and will be available from Mr Porter and George Cleverley.