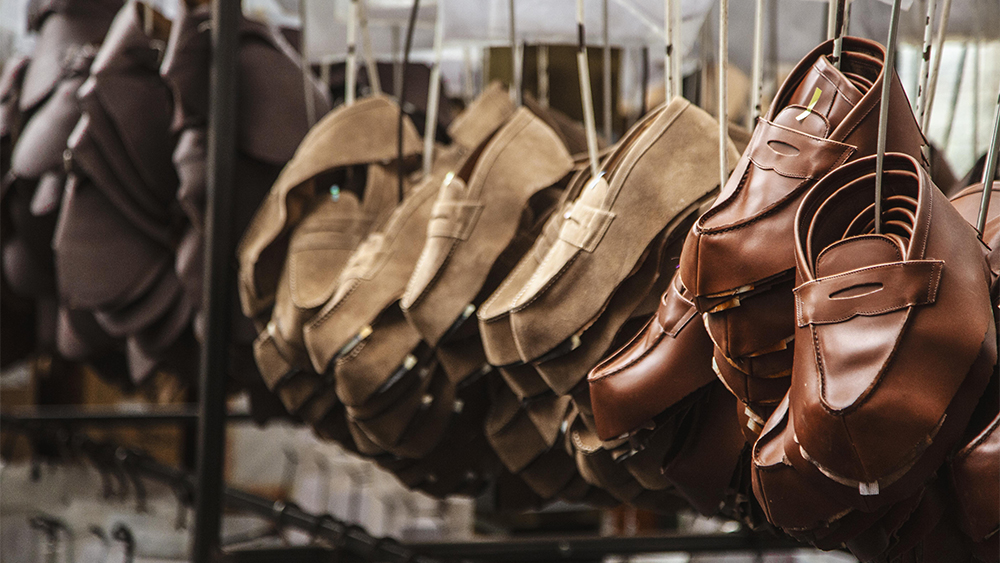 In many ways, George Cleverley is the archetypal English shoemaker. Its shop in London’s Royal Arcade, a brogue’s throw from Savile Row, is known for the kind of elegant, chisel-toed styles that are the footwear equivalent of an Anderson & Sheppard suit. The brand offers ready-to-wear but its bread-and-butter has historically been bespoke, with a client roster ranging from Winston Churchill to Bryan Ferry. One would think that the past 12 months would have been a devastating blow to a purveyor of decorous cap-toe oxfords and whole-cut dress shoes, but Cleverley is enjoying something of a boom.

“Despite a lot of the negativity, 2020 was a record year for us—and we were closed for five months,” says George Glasgow Jr., Cleverley’s CEO and creative director, who runs the business with his father, George Glasgow Sr. While the rest of us were Zooming and binge-watching, the Glasgows got to work. There’s been a string of high-wattage celebrity commissions, a robust new ready-to-wear collection and, most recently, the acquisition of an additional workshop that will significantly boost the brand’s production power.

According to market research firm NPD, dress shoe sales plummeted 50 percent last year—sneakers and slippers were the only relative bright spots in an overall dismal market. So, Cleverley really didn’t see any dip in demand? “Actually, quite the opposite,” George Jr. tells us, noting that the brand had a record-breaking number of new bespoke clients. “We have 66 shoemakers in-house and none of them was laid off.”

That in itself would be impressive, but Cleverley actually managed to grow its workforce. The new workshop—a traditional shoemaking facility outside of London that had gone into liquidation as a victim of the pandemic’s closures—is the brand’s largest ever. It comes equipped with over 90 vintage shoemaking machines, some dating back to the 1920s, offering a unique ability to increase production while maintaining the craftsmanship for which Cleverley is known.

“While they’re machines, they’re operated by hand. Nothing’s automated,” says George Jr. “We’re very pleased that these English-made machines are able to stay in England. Very few people know how to operate them other than these guys who’ve been doing it for 30, 40 years.”

One of the workshop’s first tasks is crafting Cleverley’s new range of casual shoes, centered around soft, unstructured materials like kudu suede and deerskin—a notable departure from the British formality that is the brand’s signature. The collection was born out of conversations with Mr Porter: Cleverley has produced footwear for the e-tailer’s Kingsman brand and noticed that, perhaps unsurprisingly, it was the relaxed models that sold best. In early March of last year, even before the pandemic upended dress codes, Mr Porter encouraged Cleverley to expand its casual offering.

“It started out being three or four [designs] but, during the pandemic, I said ‘Listen guys, we need to go bigger,’” George Jr. recalls. The collection swelled to 17 new styles, which have already started to trickle onto Mr Porter and will continue to be rolled out through April and May.

A boot in progress and, right, one of the brand’s new casual designs, monk-strap boots in pebble-grained leather ($825).  George Cleverley, Mr Porter

Many of the laidback loafers and Chukka boots were drawn from designs commissioned by Cleverley’s cache of Hollywood heavyweights. The brand has shod the likes of Daniel Day-Lewis and Chris Pine, both on-screen and off. “I always say that Batman and Superman are both wearing George Cleverley,” George Jr. notes quite literally: Henry Cavill and Robert Pattinson both tapped Cleverley for their superhero turns.

Around the same time that George Jr. was in talks with Mr Porter, his friend Jason Statham approached him about designing bespoke footwear for an upcoming role in Guy Ritchie’s Five Eyes. The brief? Versatile styles that can be worn as easily with suits as with chinos.

“Me and him worked together, personally, without the costume designer,” George Jr. says of his collaboration with Statham. “He takes a hands-on approach—he was in the workshops, sitting with the makers and saying ‘Let me see that hide. How does it look with that suit? Let’s try a shade lighter.’ He was in the shop every few days for weeks.”

Statham’s designs turned out to be ideal for WFH wardrobes and the prevailing casual dress code, so they made their way into the collection arriving on Mr Porter this spring. Another standout of the new collection, a unique grained suede developed exclusively for Cleverley, made its debut in a pair of loafers created for Dwayne Johnson to wear for the 2019 premiere of Hobbs & Shaw.

Cleverley’s love affair with Hollywood goes back decades, beginning with silver screen stars like Gary Cooper and Humphrey Bogart. In recent years, the relationship has been strengthened by the fact that George Jr. divides his time between London and Beverly Hills. Thanks to his American wife, the younger Glasgow enjoys dual citizenship—a particularly valuable asset during the pandemic’s travel restrictions.

“We were the only shoemaker from Europe that was able to travel to the US, do our trunk shows and serve our clients,” he says. Despite a decrease in occasions to dress up, George Jr. says that interest in Cleverley’s bespoke shoes, which start around $5,000, has piqued over the past year. He attributes this to the brand’s unique ability to access American clients and, in general, Cleverley’s long-term investment value.

“We’re not in the business of having a seasonal product,” he says. “We like to make things that are timeless.”

But that isn’t to say Cleverley has been serving up staid classics. George Jr. has observed that men are being more adventurous in their choices now that they aren’t beholden to office propriety five days a week. “Ninety-five percent of the orders taken in 2020 were not black,” he says, calling out a pair of violet suede Chukka boots as an especially successful experiment. “While that might sound a little bit out there, it’s totally unique and not your run-of-the-mill shoe. It’s something people will know was made for you.”

This insouciant mood runs throughout Cleverley’s new ready-to-wear range but, should you want to flex your own creative muscle, George Jr. is beginning his coast-to-coast US trunk show tour on April 7. Who knows? Your big idea could wind up residing next to Statham’s in George Cleverley’s league of footwear legends.