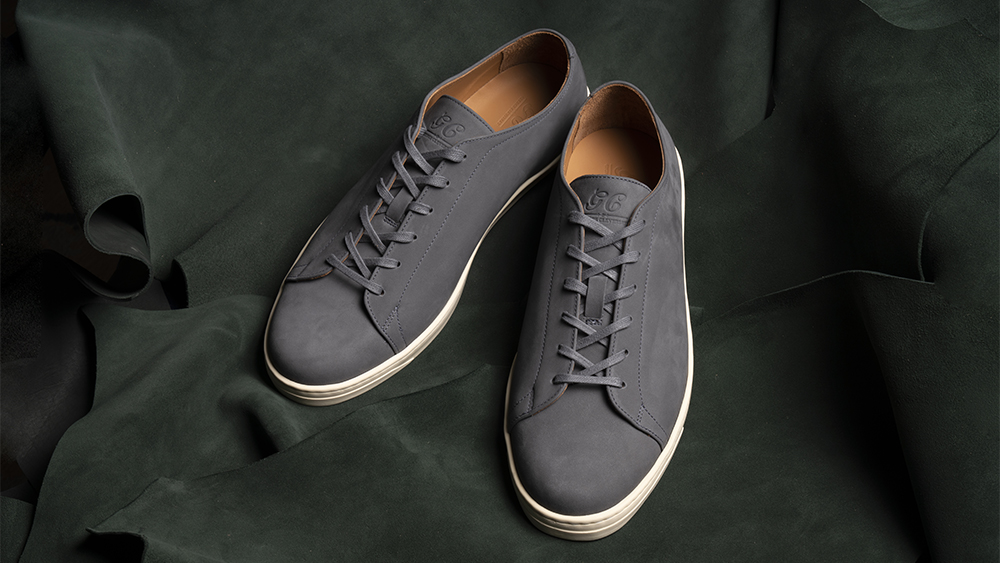 As the menswear pendulum continues to swing further from suited-and-booted propriety, it’s safe to assume that anyone dealing in footwear has a sneaker in their collection. George Cleverley, maker of superlative bespoke English shoes, however, was a notable holdout—until now. George Glasgow Jr., Cleverley’s CEO and creative director, was well aware that a brand known for handmade, chisel-toed dress shoes couldn’t hop lightly on the athleisure bandwagon. “It had to be the best trainer on the market,” he says.

After years of prototypes being tweaked and tweaked, the Jack sneaker launched in March (an initial pre-sale of 250 pairs sold out in six hours, thanks to loyal fans including Jason Statham and Henry Golding) and today it’s making its official debut on Mr Porter. The game-changer, Glasgow Jr. says, was the discovery of soles made from virgin Hevea milk, tapped from “Crying Wood” trees in South America and Africa.

The process for making Hevea milk soles takes one week for each pair.  Jordan McGibney

In addition to being a sustainable alternative to rather eco-unfriendly rubber, Hevea proved to be exceptionally flexible and durable. While those soles are produced in France, via a weeklong process that cures the liquid sap into a cushiony yet supportive solid, the $495 sneakers are entirely constructed in the UK with the same leathers and by the same craftspeople as Cleverley’s Goodyear-welted bread-and-butter.

The design, built on an archival boot last dating to WWII, is clean and timeless, at home with jeans and tailoring alike. The initial launch was limited to a classic white calfskin but Mr Porter offers a range of neutrals in velvety nubuck. Using the same bespoke-grade leathers and stitched construction as traditional dress shoes, rather than the glue job seen on most sneakers, means that the first few wears can come with some of the breaking-in pains of formal footwear. But it’s a relatively small investment to make for the Jack’s long-term returns.