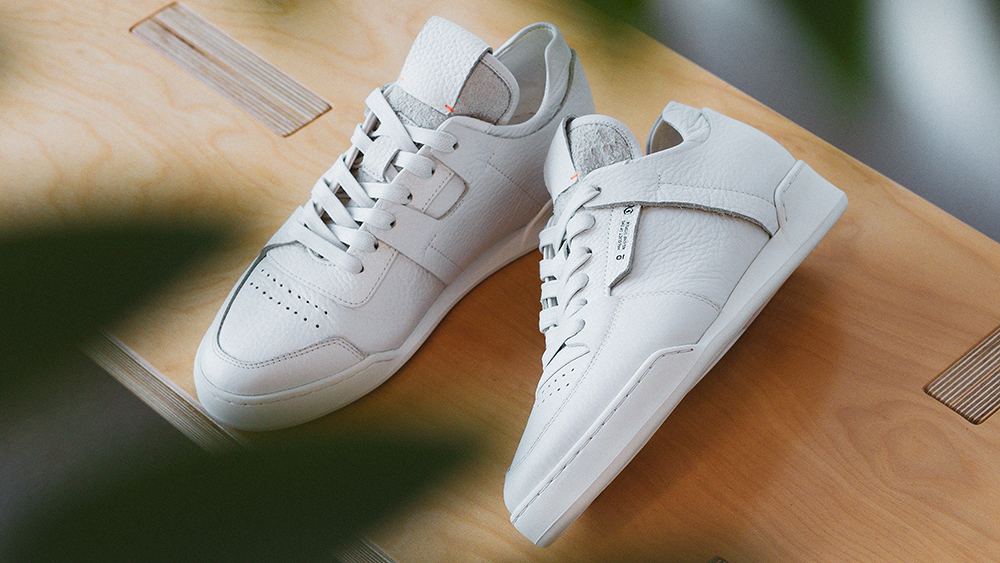 Along a commercial stretch of Lincoln Boulevard in Venice, California sits the unassuming office for No.One, an independent luxury and bespoke sneaker brand founded in early 2017 by footwear-industry veteran Mark Gainor. Behind its brick facade and frosted glass windows is a stark studio and workshop, humming with a sort of laissez-faire productivity that reflects the sleepy oceanside hamlet where it’s located.

This new venture piggybacks on its founder’s love of footwear and leverages his experience in the industry, marrying Old World techniques and a New World sensibility. Essentially, it applies the time-honored and somewhat fusty traditions of cobbling to very modern, very sexy sneakers.

The idea dawned on Gainor when he was still the creative director at Native Shoes, a job that required traveling back and forth to China to oversee work at a factory there. While he was in awe of what those facilities could produce in terms of sheer volume — tens of thousands of pairs for global behemoths like Nike and Adidas — he was equally amazed by the intimacy of the sample rooms.

“You go into those factories and you see a 10,000-square-foot floor and a production line and you’re like, ‘I could never do this.’ But, as a designer, you spend your time in this tiny room with the patternmaker, and you could stand there and see the whole process of making a shoe done in four hours,” he said. “Seeing something go from concept to a product in your hand? That’s super addictive.”

Now, at No.One, his sample room and production facilities are one and the same, located a few blocks from his home. The brand sidesteps the traditional fashion system and works very much on its own calendar, with regular releases of limited-edition product and a healthy bespoke program. By breaking free and thinking small, Gainor flips the current paradigm on its head, prioritizing creative process and time to produce quality goods over just filling an Instagram account with bright shiny objects.

“It’s so sad because the industry and the whole culture is eating itself,” he said. “They aren’t respecting creativity, they just aren’t. Creativity has never been more valuable, but it’s never been less cared for. It’s a strange thing. We’re a direct reaction to that. I hope and believe that the market will ultimately reflect that. Creativity and originality are valued.”

Instead of feeding the endless desire for novelty, Gainor seems to double down on designs that feel essential, that have longevity baked into their aesthetic. His process almost always begins with a familiar image or idea. “It starts with an archetype. There’s always a reference.” He points to a style that is based loosely on the German Army trainer, and another, the Charlie, that comes from the classic cap-toed basketball sneaker.

After he finds inspiration, he plays with materials, gathering a box or bucket full of options and then moves into sketching. “It always starts with some sort of physicality,” he says. “Like right now we’re developing a shoe based around the paracord, those really cool laces you can get in a rainbow’s worth of colors.” Gainor, who’s default setting is calm and composed, suddenly grins. The paracord and its possibilities on the design process, it becomes clear, has him enthralled.

Considering how big the apparel world has become, Gainor’s operation is amazingly self-containment. Walk in to that building off Lincoln and the whole business is all right there for you, under one roof. Considering the space’s airy, modern look, it’s a business that adheres to a rather old fashioned process. A man named Diego is making patterns at a table, and the pieces are then cut, by hand, a few steps away. Assembly is done here, too. Once the shoe uppers are constructed they are draped over lasts — model feet that help give the flat leathers some three-dimensionality. They’re then taken out back to “cure” or sit in the sun for around a week, to mold to the last and settle into their final shape. Finally, the soles are sewn in and they’re cleaned and detailed.

Because of this, his shoes come at a luxury price point—from around $575 upward to $800 depending on the materials used. The bespoke program, for which customers have lasts made according to a 20-point measurement of their foot, can cost even more—but it allows for a wholly unique end result. Gainor says bespoke is around 40 percent of No.One’s business right now, and shoes can be delivered within six weeks. More impressively, he estimates that 60 to 70 percent of the brand’s business is from repeat customers.

Speaking of customers, Gainor notes that they come from all walks of life — businessmen, athletes, you name it. “The ten smartest marketing, branding people in the world couldn’t profile who they are, and nor could an algorithm. We just have a really eclectic group of consumers.”

As for the future, Gainor is looking to grow No.One’s presence while still maintaining its integrity. This means building out a sales and marketing team and using the current studio space as a consumer-facing storefront, things he’d like to see accomplished early next year. He believes deeply in his product and how it’s made. “Now we need to figure out how to engage with the world at large,” he said.

Gainor hopes that more people come in and take part in the bespoke experience, mainly because it gets at the core of what No.One is built around: the personalized, the handcrafted. “I’d love for bespoke to be 60 percent of the business one day,” he said. “This is such a good experience, for people to come in here. I know that they won’t find this anywhere else in the world. That gives me a lot of pride.”