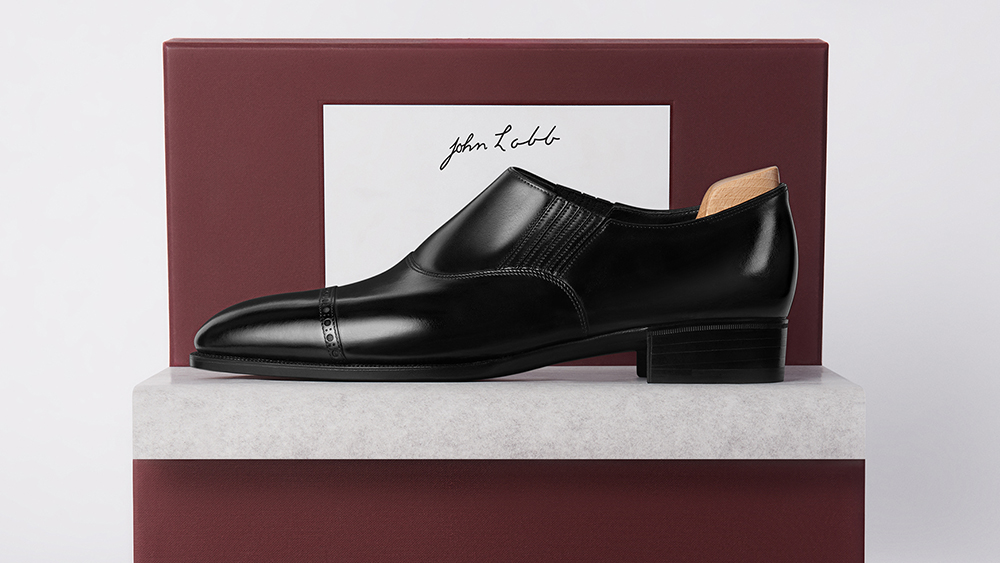 If shoes maketh the man, then John Lobb’s bespoke kicks have been a defining feature of some of the greatest, from Prince Philip to Frank Sinatra. A pair of custom-made Lobbs is entrée to an elite group of discerning gents—typically only accessible after four-to-six months waiting and several rounds of fittings. But, for the first time ever, the brand’s hallowed Paris bespoke atelier has produced a pair of shoes that you can buy right now.

But don’t start scrolling through their website; it isn’t that simple. Naturally for shoes this special, it is an extremely limited-edition. This unprecedented offering is to mark the 20th anniversary of John Lobb’s presence on U.S. soil, beginning when the first stateside flagship opened on Madison Avenue in 2000. As such, only 20 pairs were made and they’re only available via the brand’s American stores (in addition to New York, there are now outposts in Houston, Miami and California’s South Coast Plaza). As if the rarity alone wasn’t noteworthy, we should also mention that the design is deeply chic.

“We wanted a project that could be a collaboration between all the different teams: the North American team, the Paris bespoke atelier and the UK team in Northampton, where the ready-to-wear atelier is located,” explains Philippe Gonzalez, John Lobb’s CEO. “We worked on a style that borrowed from all of them and all our best-selling styles.”

The resulting Madison 20, as the model is known, is a stylistic hybrid of the three fashion capitals that embodies quintessential John Lobb style—what Gonzalez defines as “discreet and classy.” In a nod to America’s laidback ease, it is a slip-on (according to Gonzalez, the brand’s classic Lopez loafer is the most popular style in the US). But, true to Lobb’s English roots, it is a smartly-cut Oxford. Paris, of course, contributed the haute handiwork. One could be forgiven for not thinking much of whether the shoes were made in the UK or France, but a bit of history can explain the significance.

John Lobb was founded in London in 1866 (first client? None other than the Prince of Wales). After several decades of success, the brand expanded to Paris and eventually opened a shop on Rue du Faubourg-St-Honoré in 1924. Its neighbor was a little saddle shop by the name of Hermès and soon all the well-heeled riders were popping next-door to commission their boots. The two brands shared a similarly uncompromising commitment to quality and, fast forward a bit, in 1976 Hermès acquired Lobb as part of the family. At that point, the shoemaker exclusively worked on bespoke orders but, to meet the steady demand, ready-to-wear was introduced in the ’80s. That endeavor brought the brand back to the UK’s shoemaking mecca, Northampton, where the readymade collection is still produced today.

While all John Lobb shoes are exquisitely made, the Paris workshop is the zenith of what Lobb stands for. To put it in numerical terms, the brand’s average ready-to-wear shoe involves 190 steps (which is remarkable as far readymade shoes go) whereas bespoke requires 300 steps, all done by hand, and takes an average of five months to produce each pair. Paris solely produces the grand cru of shoes.

The Madison 20 begins with a hand-carved last (a streamlined silhouette with a sleek almond toe) around which just three pieces of box calf leather form the upper. Lined in buttery kidskin, the upper is sewn with seven-ply linen thread before being hand-welted to the leather sole using a bristle of boar hair in lieu of a needle (as no needle could be both fine enough and strong enough to achieve the desired stitch).

The intricate details are impressive, sure, but what does it mean for you? All of these things are in service of superior comfort. Unlike ready-to-wear shoes, the sole is sculpted with rounded edges to better fit the arch of one’s foot. The heel is a bit higher and slightly narrower than most to provide greater stability. And before the shoe is polished and glazed, the workshop breaks them in (again, by hand) to ensure a perfect fit from day one. It is, as Gonzalez says, “an invisible gesture that makes a difference.”

In the event that you aren’t one of the lucky few to nab a pair of the Madison 20, all hope isn’t lost. Since the brand has one of its master bootmakers, Paul Wilson, permanently stationed in New York, it is able to offer bespoke fittings at any of its US stores. Even if you aren’t in a city with a John Lobb store, Wilson will gladly travel to you. But if you’re one for instant gratification (who isn’t?) we’ll just say this: act fast.