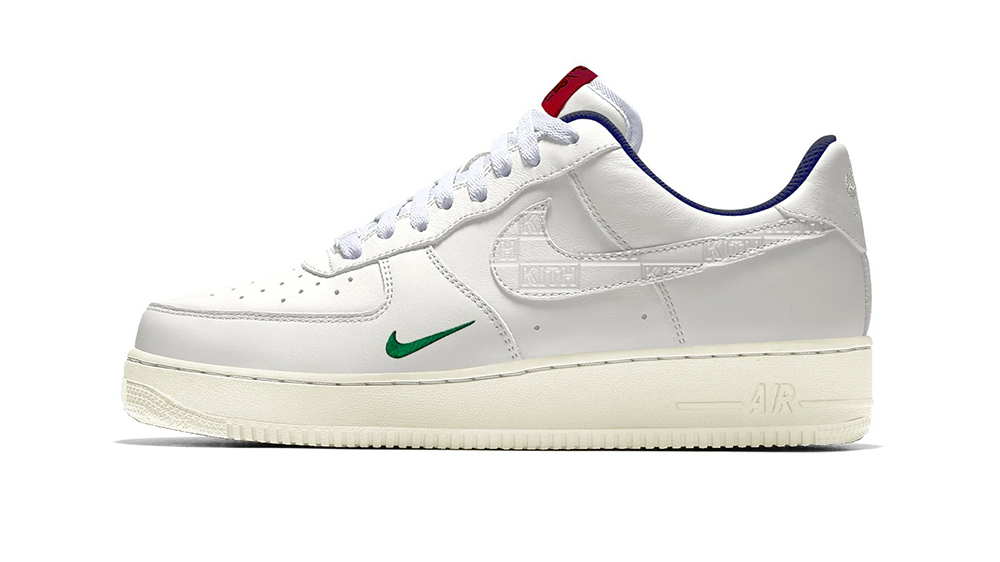 When it comes to footwear, we’re living in the Golden Age of the collaboration. Everyone from Dior to Off-White has seen one (or more) to fruition and other brands at every point along the price spectrum are jumping in on the action. Not to be left out, the cult retailer KITH, known for its selection of the best sneakers and streetwear, is teaming up with Nike.

Following a tease by Kith owner Ronnie Fieg in late November, Nike has released a closer look at KITH’s interpretation of the classic Air Force 1 Low. The Kith x Nike style maintains the chunky silhouette recognized by sneakerheads everywhere, but with a few luxe upgrades.

This version of the shoe sees its upper swapped out for smooth white leather and its perforated toe accented by an embroidered green Nike Swoosh. The larger Swoosh symbol that graces nearly every Nike shoe is intact, but this version is embossed with KITH’s crisp block logo across the surface to match the colorful version emblazoned on the tongue. The laces are tipped with gold-tone metal that makes the results of the team-up seem that much more special.

It should be noted that this is not the first collaboration––not even the first one this year––to focus on the Air Force 1. A true pioneer in the market, it was designed by Bruce Kilgore and first released in 1982 as a high-top model quickly adopted by NBA players. (“It was my first basketball shoe,” Kilgore said in 2017.) Only a year later, the low-top version was released (the one KITH chose to reinterpret for its collaboration), but was almost discontinued entirely not long after until a ‘color of the month’ program engineered by a cohort of Baltimore retailers encouraged shoppers to keep buying. By the mid-2000s, sporting-goods analyst Matt Powell told The New York Times he estimated that the shoe sold 12 million pairs just in 2005.

There’s something about the balance the shoe strikes between minimal aesthetic and substantial proportion that makes it inspiring to designers of every stripe. Surely more iterations are to come. We can only guess how many millions have been sold since Powell made his famous appraisal, but this is partnership will undoubtedly add a healthy boost to the tally.