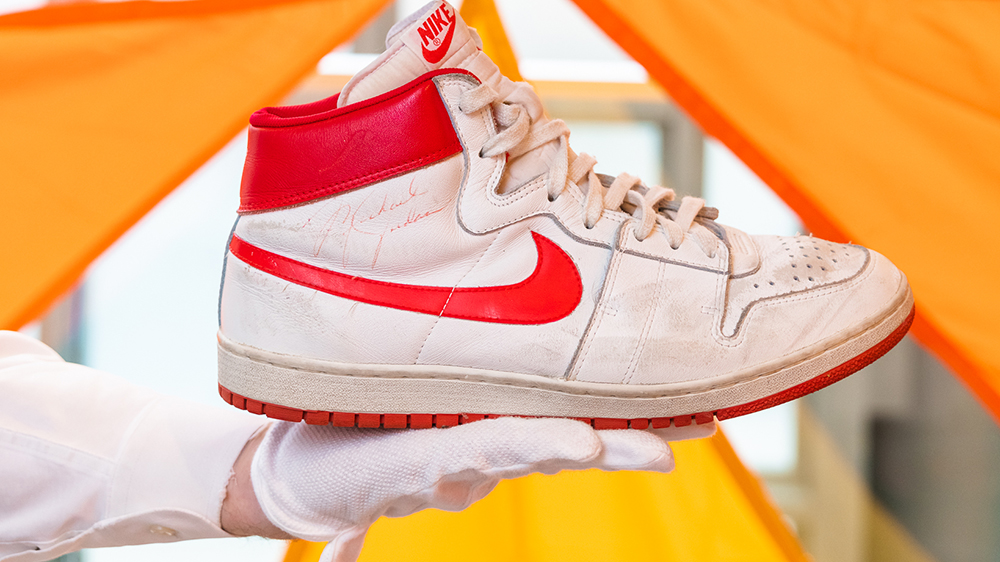 The sneaker world has a new GOAT—when it comes to auctions, at least.

Michael Jordan’s earliest known game-worn Nikes from the ‘80s sold for just shy of $1.5 million at Sotheby’s Icons of Excellence and Haute Luxury auction in Las Vegas on Sunday, setting a new world record in the process.

The 1984 Nike Air Ships are now the most expensive sneakers ever sold at auction and the first to reach more than $1 million under the gavel. The slam-dunk kicks—which hammered for $1.472 million, to be exact—were acquired by avid cards collectors Nick Fiorella, according to the auction house.

The Air Ships sold for a record-breaking $1.472 million.  Sotheby's

Designed by Bruce Kilgore, the Air Ship was the first basketball shoe donned by Jordan as an NBA pro in 1984. These particular trainers graced the court in the fifth game of Jordan’s rookie season and represent not only the beginning of Jordan’s illustrious sporting career, but the start of Air Jordan as we know it. Jordan’s signature line of shoes and clothing, which he started with Nike back in ’84, has seldom waned in popularity. In fact, following ESPN’s documentary The Last Dance, demand for Jordan’s garb skyrocketed.

“This record-breaking result for the Jordan Nike Air Ships affirms the place of Michael Jordan and the Air Jordan franchise at the pinnacle of the sneaker market,” Brahm Wachter, head of Sotheby’s streetwear and modern collectibles, said in a statement.

A side profile of the right sneaker, showing the NBA Champion’s signature.  Sotheby's

Indeed, the previous auction record was held by a pair of Nike Air Jordan 1 Highs worn by the Chicago Bulls shooting guard in an exhibition game in 1985, which sold for a comparatively modest $615,000 at Christie’s back in August 2020. The most valuable sneakers ever, meanwhile, come from the closet of Kanye West. The 2008 Nike Air Yeezy 1 Prototypes, which the rapper sported on stage at the Grammys, went for $1.8 million at a private sale held by Sotheby’s last April.

“Since launching sneaker sales at Sotheby’s in 2019, we’ve seen time and again the ceiling for sneakers continue to be pushed, and we are excited about all the potential ahead of us,” Wachter adds.

Perhaps the GOAT will be dethroned before too long.