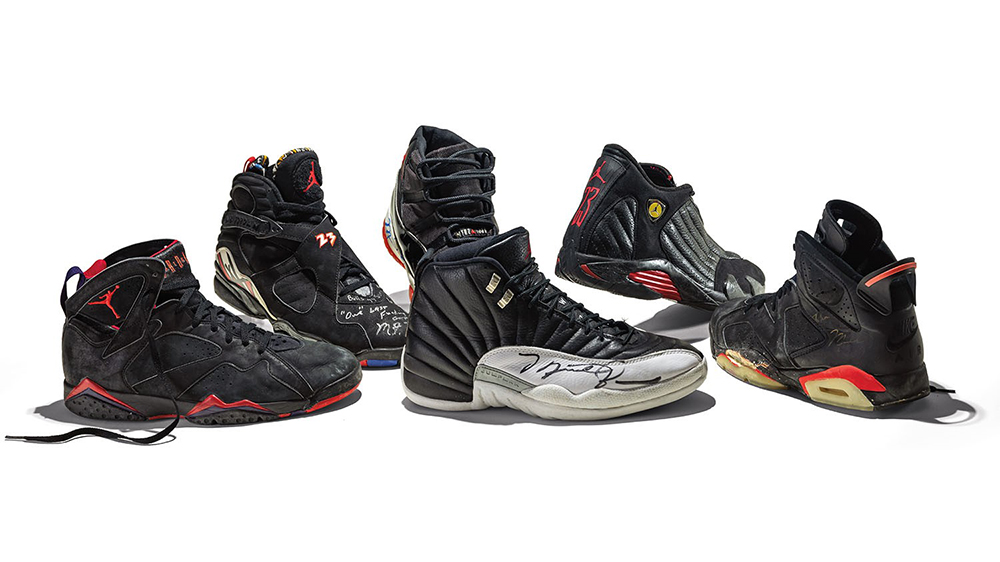 The holy grail of basketball memorabilia just got its own exhibition.

On Wednesday, six pairs of sneakers that Michael Jordan wore during his NBA championship games in the 1990s went on display. The Certified Sport Guaranty group is showing the the shoes, which it’s calling the “Dynasty Collection”, at an exhibition in Atlantic City, New Jersey that coincides with the annual National Sports Collectors Convention. The collection is the first of its kind to feature each of the sneakers Jordan wore during his final games in 1991, 1992, 1993, 1996, 1997 and 1998. All of the styles have been authenticated by CSG and a few are even signed by Jordan.

The NBA legend wore Nike Air Jordan 6’s for his first title game in 1991. (Fun fact: designer Tinker Hatfield is said to have modeled them after Jordan’s Porsche 911.) The following year, Jordan sported a pair of Air Jordan 7 sneakers at the championship game; this was notably the first pair without Nike branding. In 1993, he wore a pair of Jordan 8’s that feature the distinguished “x-strap” that covers the laces. Three years later, the GOAT rocked his famous “Bred” sneakers, the Air Jordan 11’s, with a translucent sole. For his final championship game, Jordan wore an early prototype dubbed the “Last Shot,” that boasts lines similar to his Ferrari 550 Maranello.

Although Jordan hasn’t played in an NBA game in decades, CSG curated the Dynasty Collection to honor his legacy and career beyond the court. The hall of famer’s impact has maintained his position as a household name. And we wouldn’t be surprised if serious such an assemblage of the sporting world’s rarest memorabilia elicited a strong reaction among serious collectors.

“Even after examining the world’s most important collectibles for four decades, the Dynasty Collection had the power to take my breath away,” said Mark Salzberg, chairman of the Certified Collectibles Group, which owns CSG, in a statement. “For the role these shoes play in our collective consciousness, how they relate to sports, fashion and celebrity, they are the contemporary Ruby Slippers, only rarer.”

The game-winning kicks will be on display until July 31. If you can’t make the trip, you can sign up on CGScards for a virtual look at the exhibition and to learn more about the Dynasty Collection.