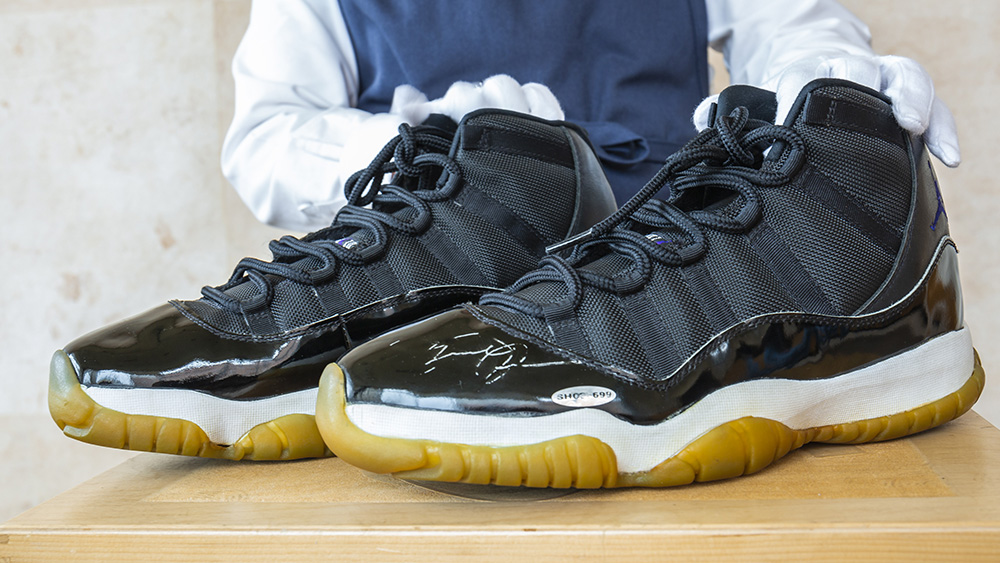 If you’re a Space Jam fan, these Air Jordans will likely need no introduction. The slam-dunk kicks were donned by the legendary Michael Jordan in the iconic ‘96 flick and have just been listed for auction.

Created in 1995, the Air Jordan 11 “Space Jam” sneakers were worn by the NBA legend in the famous final basketball game between the Loony Tunes squad and the alien “Monstars.” With only a handful in existence, this particular pair was made to Jordan’s exact specifications, though they never actually made it onto his feet. Thus, they are presented in immaculate condition and considered to be one of the finest pieces of nostalgic Space Jam memorabilia.

The size 13 sneakers, which are expected to fetch between $150,000 and $200,000 at Sotheby’s this month, were created by legendary Nike designer Tinker Hatfield. The silhouette was specially designed to accommodate Jordan’s movements during gameplay yet still be stylish enough to be worn off the court. The colorway was exclusively created for the GOAT and was not featured on retail pairs while the patent leather upper meant that he could pair the kicks with a suit.

The kicks come housed in a custom wood box with velvet lining.  Sotheby's

To top it off, the sneakers sport a purple Jumpman logo and are emblazoned with Jordan’s signature in silver ink.

“This pair is truly a grail for many sneaker collectors worldwide,” Brahm Wachter, Sotheby’s head of streetwear and modern collectibles, said in a statement. “It’s coded as a ‘Player Sample’ which means it was cut with Mr. Jordan in mind and to his specifications. However, this pair has been kept in absolutely perfect condition to this day.”

The Space Jam Jordans will be offered in a single-lot online auction titled MJ’s Secret Stuff that’s running until 26 July. The sale also coincides with the premiere of the film’s sequel, Space Jam: A New Legacy, which debuted nationwide on Friday, July 16. The flick stars Lakers superstar LeBron James, as well as a full cast of beloved Loony Tunes characters.

“We’re excited to drop them the same week as the release of Space Jam: A New Legacy, and celebrate the legacy of two of the greatest athletes in the history of the NBA: LeBron James and Michael Jordan,” Wachter added.

The current bid for the Space Jam Jordans is set at $65,000 with nine days left on the sale. But, if history repeats itself, the kicks could well exceed estimates. Just last year, Jordan’s first-ever pair of signature sneakers, his coveted Air Jordan 1 from 1985, shattered the high estimate of $150,000 and hammered for more than half a mil at Sotheby’s. Stay tuned, folks.