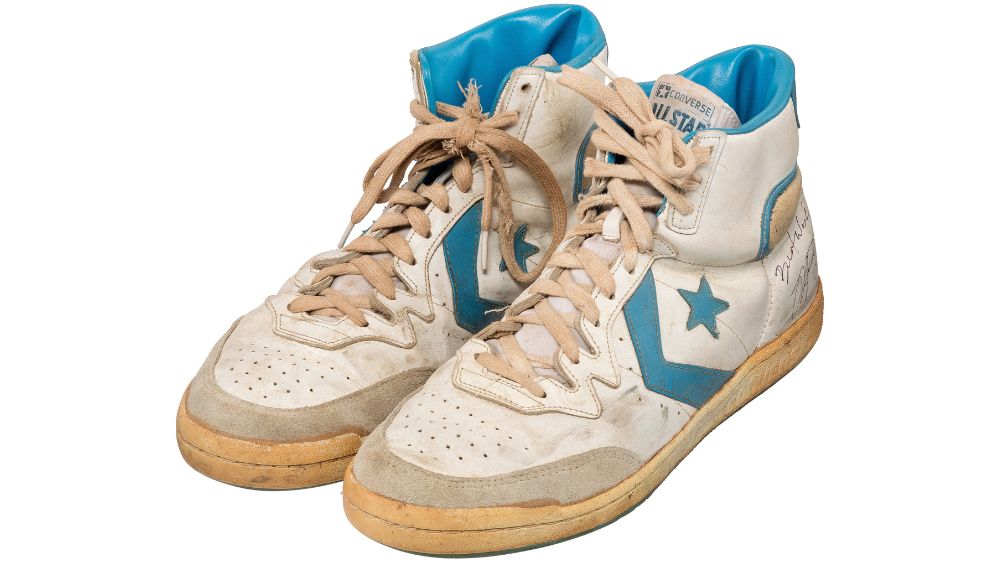 If you tuned into The Last Dance docuseries like the rest of the world, you know all about Michael Jordan’s legacy with the Chicago Bulls. Now, a pair of game-worn Converse he sported as a young North Carolina Tar Heel is up for grabs—and you could say the sneakers are what started his momentous career.

The collectible kicks were offered up to Heritage Auctions by Chuck Duckett, who was MJ’s roommate and team manager at UNC back in 1982. Jordan apparently handed the sneakers over to him during his freshman year. “He played in them, practiced in them and wore them around campus,” Duckett tells 247 Sports. The UNC men’s basketball team would go on to make history that year when they became NCAA national champions. And who could forget Jordan’s game-winning jump shot?

Despite landing one of the biggest, most successful sneaker partnerships of all time, it turns out that Jordan was partial to playing in Converse. The pair being auctioned feature a blue and white colorway that is synonymous with the University. The kicks also come with the number “23” written on the interior of each tongue tag, as well as the words “Best Wishes” inscribed by Jordan himself.

Duckett reconnected with the GOAT in January at the 40th-anniversary celebration of North Carolina’s 1982 National Championship basketball team. “We sat and talked and I showed him pictures of the shoes and he said he remembered them well,” Duckett continues.

“He said, ‘Those are worth a lot of money, you should sell them.’ I told him my sister-in-law owned them, did he want them back? He said no. I suggested we put them on auction and give half of the money to Carolina Basketball. He looked at me and smiled and said, ‘That’d be great, I’d really like that.’”

With bidding set to close on August 28, the shoes are expected to fetch upwards of $100,000. Although it’s likely they’ll run way past that. For context, a pair of Nike Air Ships from Jordan’s rookie NBA season sold for a record-breaking $1.47 million at auction last year. Perhaps this lot’s estimate should come with one more “0.”