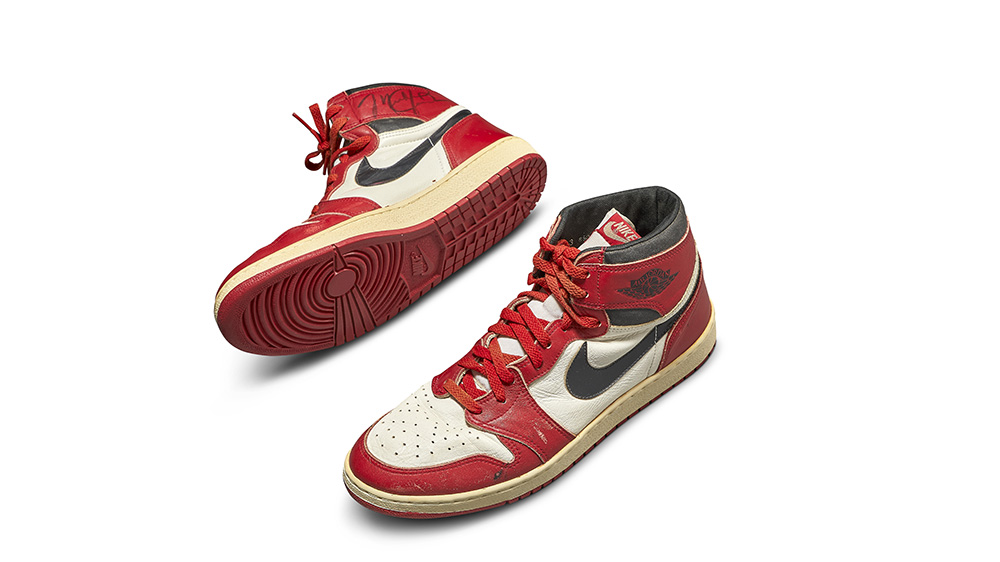 Before every Bryant, Iverson and James had signature sneakers, Michael Jordan was turning out iconic kicks. The legendary American athlete released no less than 34 pairs of Air Jordans across his illustrious career, and that’s not including the many different colorways and variations of each. Now, the world’s first-ever pair of signature sneakers, his coveted Air Jordan 1 from 1985, will go under the gavel at Sotheby’s.

The Vintage Originals were worn by the Chicago Bulls shooting guard throughout many nail-biting games in the ‘80s and come complete with scuff marks from tussles with his opponents, as well as an autograph from the hero himself. The Vintage Originals are expected to fetch up to $150,000—and may well sell for more—ranking them among the most expensive sneakers ever made.

“Michael Jordan is perhaps one of the greatest athletes to ever walk the face of the earth, and it is an honor for Sotheby’s to offer this historic pair of sneakers,” Brahm Wachter, Sotheby’s director of eCommerce development, said in a press release.

The sneakers, which are in remarkable condition, feature the classic Chicago Bulls colorway of white, black and red that Jordan wore the most often on the court. They are emblazoned with “850204 TYPS” and “player sample” which indicates the year and month they were made and shows they were manufactured by Nike exclusively for Jordan. Since Jordan wore mismatched shoes for most of his career, the pair is in a size 13 (left shoe) and a 13.5 (right shoe). The right shoe features Jordan’s signature in black permanent marker.

The ultra-rare Jordans are on offer from the collection of noted sneakerhead Jordan Geller. After making them the “crown jewel” of his sneaker museum, the ShoeZeum in Las Vegas, Geller decided it was time to pass the pair on to a new adoring owner.

And the timing couldn’t be better. The dedicated online auction—which is open for bidding from May 8 through May 17—coincides with the 35th anniversary of Air Jordan, and the final episode of ESPN’s popular documentary The Last Dance, which details Michael Jordan’s prolific career with the Chicago Bulls.

“Owning this pair has been a real pleasure, and with all the excitement surrounding Michael Jordan and The Last Dance, my wife and I decided that it’s time to let the shoes find a new home,” Geller said.

The current buzz could push the sneakers well beyond their initial estimate. In fact, last year, the equally coveted Nike Waffle Racing Flat ‘Moon Shoe’ fetched an epic $437,500 during Sotheby’s online auction, far surpassing its top estimate of $160,000. This could be a record-breaker, folks.