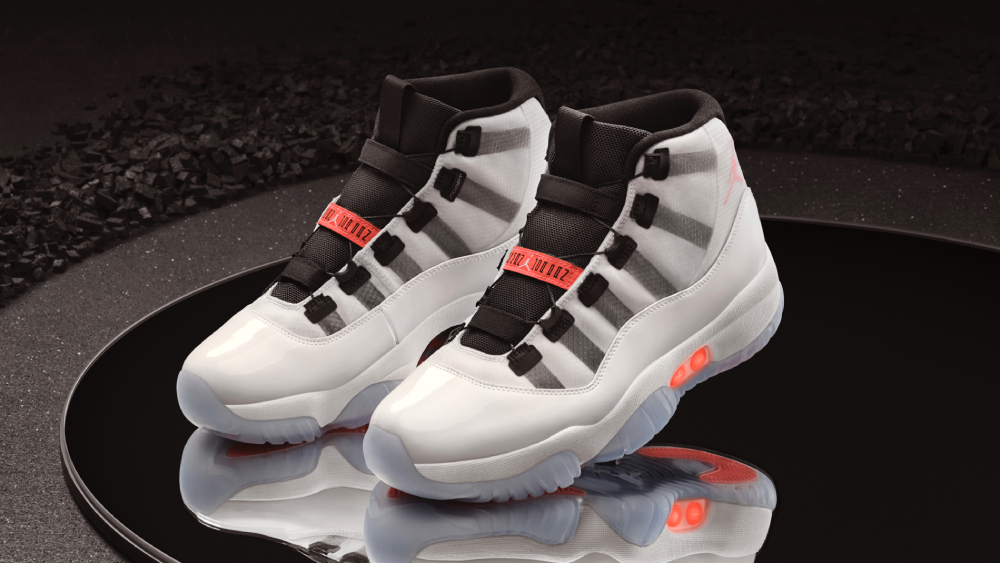 Nike is taking a decidedly high-tech route to honor one of its most revered classics.

It’s been a quarter of a century since Tinker Hatfield laid down his initial sketches for the Air Jordan 11, which would set the standard for laceless designs. To update the footwear benchmark, Nike’s design team took the somewhat counterintuitive approach of adding its new power lacing technology while staying true to the original silhouette.

Further upping the ante, the brand’s Adapt technology is incorporated throughout, justifying its new name: the Air Jordan XI Adapt. Controlled via the Jordan-inflected Adapt app, the wearer can instantaneously customize his kicks by personalizing the color scheme and flashing pattern of the light clusters tracing the midsole. The same app also integrates with the power lacing setup so the fit can be efficiently tweaked for optimal comfort and performance.

The color scheme and flashing pattern of the midsole lights are customizable.  Nike

With its white, translucent upper and selective strokes of bright color, the XI Adapt may be sporty, but that doesn’t mean it’s limited to the basketball court. The original Air Jordan 11 was developed by Hatfield after Michael Jordan himself requested a shoe with patent leather that would look good even for more formal occasions. The unorthodox result became Jordan’s favorite. This new version features those same glossy elements, which highlight every contour of the sleek pair, but this time with a somewhat ghostly, futuristic feel.

As far as sneakers go, Nike has a long history of coming up with self-lacing styles—even if they started off as pure fiction. The footwear giant first conjured up a pair to appear in the first Back to the Future film before making the idea a functional reality in 2016. All of the components involved have only grown more sophisticated with a smoother operation that makes us confident this will be the best version yet.

The Air Jordan XI Adapt sneakers will be available beginning at 10 a.m. on December 30 for $500.