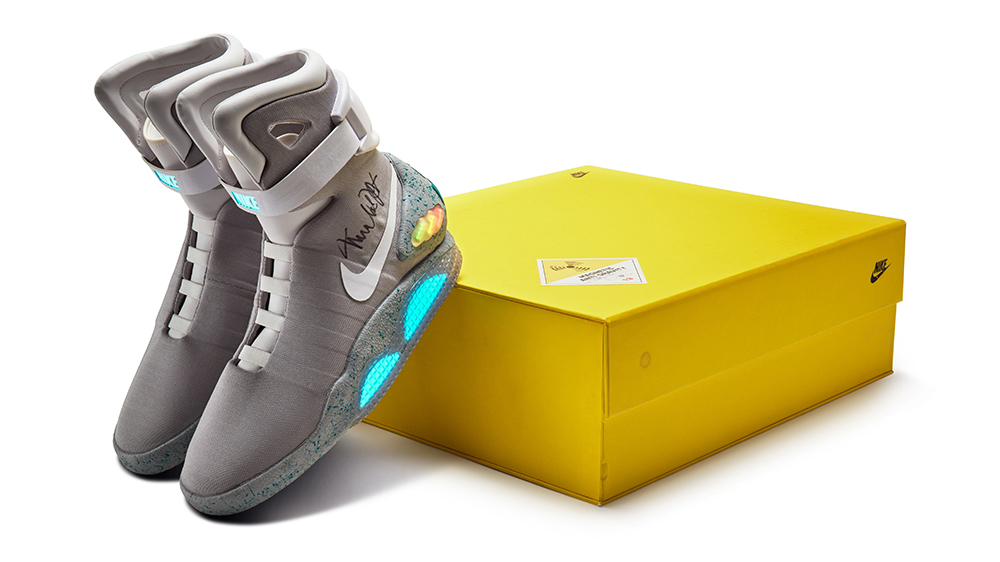 If you’ve spent the past 32 years dreaming of owning Marty McFly’s Nike Mags, you’re in luck.

A pair of official replicas based on the futuristic kicks Michael J. Fox wore in Back to the Future II will be auctioned during Sotheby’s single-lot “The Future is Back” sale later this month. And these rare sneakers come with a very important and unique design feature: Fox’s signature.

The Mag made its first appearance in the second installment of the beloved Back to the Future trilogy back in 1989. In the flick, McFly time travels forward to 2015 and partakes in a number of futuristic activities, including wearing a pair of Nikes with “power laces” that self-tie. For years after the film’s release, sneakerheads and cinephiles alike begged Nike to make and sell the high-tops. However, the footwear giant held out, leading many to dub the sought-after ’80s relic the “greatest shoe never made.”

Finally, in 2011, Nike partnered with the Michael J. Fox Center for Parkinson’s Research to turn the cinematic icon into a reality for collectors. The shoemaker produced just 1,500 pairs, all of which were auctioned for charity on eBay. The sale raised just shy of $10 million in 10 days, with all proceeds helping to fund the Foundation’s vital work. The limited-edition drop was such a hit, in fact, that Nike released a second pair of Mags in 2016 and another redesigned version, dubbed the Adapt BB Mag, in 2019.

Nike Mag “Back to the Future” signed by Michael J. Fox.  Sotheby's

This specific pair of size 13 Mags are from the very first run and belong to “an important American collector,” according to Sotheby’s. The light-grey high-tops are just like the ones from the movie and feature a rechargeable LED panel that can glow for up to five hours per charge. The upper is also emblazoned with Fox’s autograph for film buffs.

Nike Mag “Back to the Future” signed by Michael J. Fox.  Sotheby's

Making your childhood dreams come true won’t be cheap, though. Sotheby’s expects the shoes to sell for between $30,000 and $50,000 when the online auction wraps up on September 23. If bidding reaches the high-end of that estimate, the sneakers will comfortably eclipse a similar pair of size 11 Mags that sold for $25,000 at Sotheby’s last year.

In the words of Doc Brown, “Great Scott!”