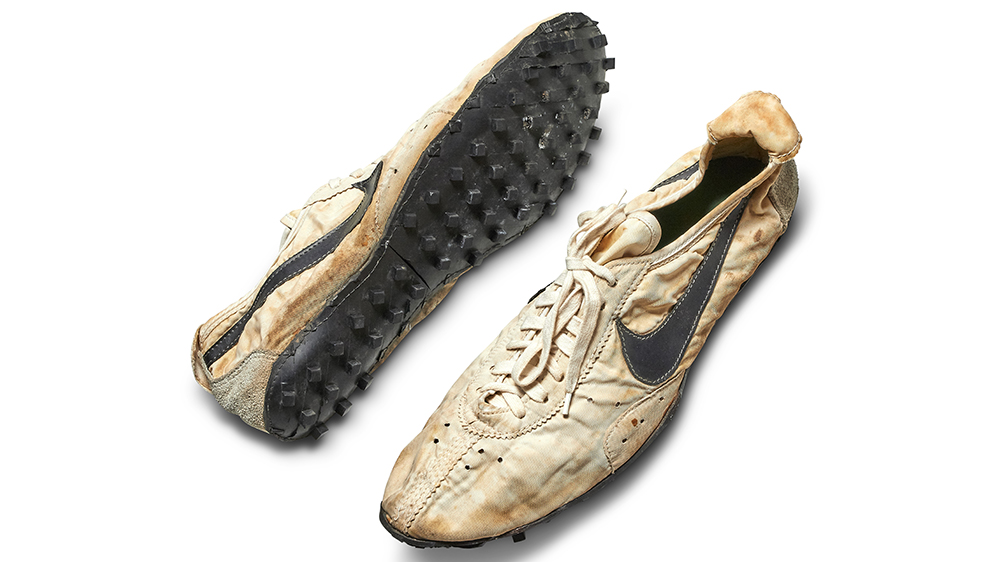 A pair of retro kicks from the ‘70s just became the most expensive sneakers ever sold, smashing the previous world auction record by more than double. The 1972 Nike Waffle Racing Flat ‘Moon Shoe’ fetched an epic $437,500 during an online-only auction yesterday, far surpassing the pre-sale estimate of $160,000.

The 47-year-old runners were the only pair remaining in the extremely hyped Sothebys x Stadium Goods action—with the other 99 limited-edition sneakers in the lot being snapped up by Canadian entrepreneur Miles Spencer Nadal last Wednesday for $850,000. And it appears the serial collector couldn’t let sleeping sneakers lie, Nadal ended up buying the coveted Nike kicks, too.

Initially, Sotheby’s and Stadium Goods rejected Nadal’s offer to acquire the entire collection, deciding to keep the pair available for public bidding instead—but that didn’t deter the 61-year-old sneaker enthusiast, and he forked out more than half of what he paid for all 99 to secure the one rare pair.

“I am thrilled to acquire the iconic Nike ‘Moon Shoes,’ one of the rarest pairs of sneakers ever produced, and a true historical artifact in sports history and pop culture. When I initially acquired the 99 other pairs in this auction last week, I just knew the Nike’s had to remain part of this remarkable collection, and I couldn’t be happier with the result,” Nadal shared in a press release.

The successful businessman and philanthropist plans to display the entire million-dollar collection in his 94,000-square-foot private museum. Located in Toronto, the Dare to Dream Automobile Museum houses Nadal’s comprehensive collection of rare cars and motorcycles, including first motorized car—The Karl Benz Motorwagen—a 1955 Mercedes Benz 300 SL Gullwing and more than 140 other rare beauties. Nadal plans to open the museum to friends, family and charitable organizations, upon request.

So, what makes the six-figure sneakers worthy of exhibit? The ‘Moon Shoe’ is considered to be one of the most significant artifacts in Nike’s history. The sneakers were designed by Nike co-founder and renowned track coach Bill Bowerman for the runners at the 1972 Olympic Trials. Legend has it, Bowerman developed the unique waffle tread while tinkering with his wife’s waffle iron—he switched batter for rubber and thus created the first prototype of the innovate sole. Only 12 sets were made—with even fewer remaining today—and this particular pair is the only known to exist in an unworn condition.

John McPheters, the co-founder and co-CEO of Stadium Goods, said: “We’re extremely pleased that the Moon Shoe ended up in the hands of a collector who has the intention of preserving and displaying this incredible piece of sneaker history, and sharing it with the world.”