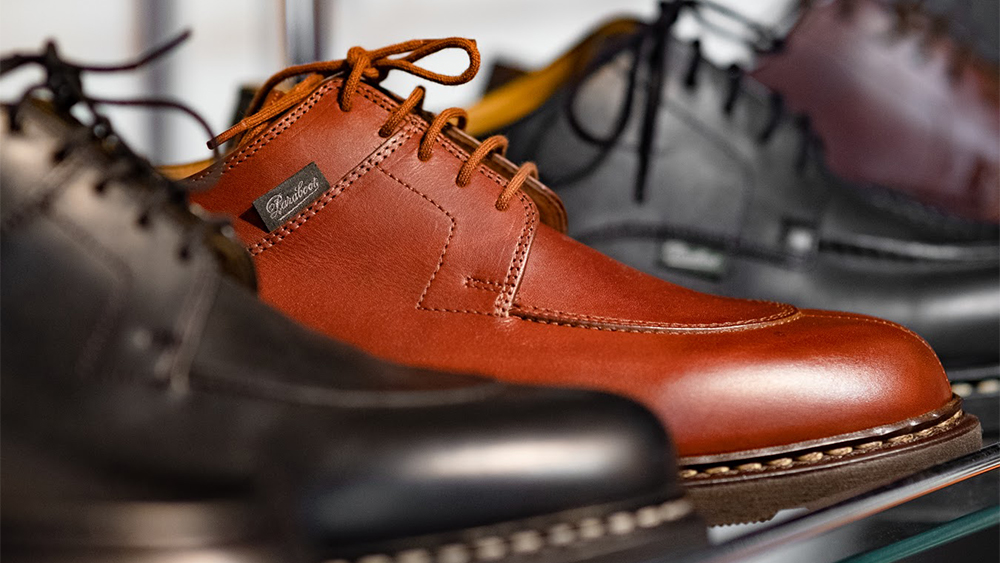 “Hype” and “classic” are two words that rarely feature in the same sentence, but when discussing Paraboot, the forward-thinking French shoemaker founded in 1908, they’re justifiable. In regards to the former, the hype is real: Paraboot’s instantly recognizable design, which toes the line between ruggedness and refinement, is worn by everyone from your average Alsatian farmer to trend-setting Japanese menswear aficionados. As to the latter, the fact that its best-selling model has been in constant production since 1945 says it all.

One person who can testify Paraboot’s classic credentials is British retailer John Simons. “A great classic, whether it is in art, fashion or music is hard to define but without defining it, its presence remains magnificent,” he tells Robb Report. “For me, Paraboot’s key models have certain timeless appeal and I think that is why they manage to connect with consumers today.”

Simons launched his namesake business in 1964, importing swaths of Ivy League staples and more, and is a revered figure in British menswear. In the early 1980s, he was the first in the UK to stock Paraboot’s Michael model. “I took a risk…I suppose you could say it was a pioneering approach but, sure enough, the classic object has borne out to be true,” he adds.

A selection of Paraboot’s most iconic models, including the “Michael” (right, $440).  Clutch Cafe/Alex Natt

Despite its urban appeal, Paraboot is most at home in the countryside south of Lyon, where it’s been based since day one. The company traded under another name up until 1927 when it adopted its current moniker, which references the port of Para in Brazil, where it sources its latex. The combination of a sturdy leather upper attached to a latex sole via a Norwegian welt was a home run, especially for French farmers who needed durable, waterproof footwear. The quality was superior then, and it still is today.

Paraboot’s early designs, such as the Michael, Chambord and Avignon quickly became an indelible part of French culture, worn by everyone from your average Jacques to a classical violinist living in a Parisian suburb. “He bought them at a flea market and would re-sole them completely to give them a second life. For him, it was the brand to wear as the shoes are indestructible,” Gauthier Borsarello, one of France’s leading menswear authorities, recalls of his father’s choice of footwear back in the 1980s. Every year for his dad’s birthday, Borsarello buys him a pair.

When asked why Paraboot has enjoyed so much success in recent years, Borsarello puts it simply: “They are very open to change without compromising their quality.” Heritage brands often struggle with change. Paraboot bucks this trend, and is stronger than ever thanks to its willingness to collaborate with other brands, from Aimé Leon Dore in New York to Drake’s in London. A collaboration, four years ago, with its compatriot Arpenteur, known for chic workwear, proved so successful that it has continued every season.

The two brands bonded over their shared values of understated style and local manufacturing. Arpenteur’s co-founder Laurent Bourven thinks Paraboot will be making shoes in France for another 110 years as they have “a very clear vision of where they want to go, and being family-owned makes the difference when you must execute this vision.” One of Arpentuer’s exclusive models that Laurent singles out is the Elevage boot: “It was designed in the 1950s for men who take care of horses in the Camargue region, but with a contemporary tweak in the oiled nubuck leather.”

The “Elevage” boots ($501) from Paraboot’s collaboration with Arpenteur.  Farfetch

Collaborations and digital savvy works, but diverse distribution has been a key ingredient in the success of Paraboot’s business plan. London’s streetwear-focused Goodhood is a notable example—it pairs “Michael” derbies with buzzy names like Aries and Needles. Clutch Cafe, another London shop famed for its vast array of niche Japanese labels, has undoubtedly increased the brand’s appeal.

“Over the past few years they have been gaining a bit more of a cult status, I think in part to their popularity in Japan,” Ben Chamberlain, Clutch Cafe’s manager, says. “It’s one of those crossover brands which has it all: history, innovation, quality, a good price and a range of styles. When you look at certain styles like the ‘Michael’ or ‘Avignon,’ it’s difficult to date them…they straddle heritage style and street style perfectly.”

Clutch also stocks some of Paraboot’s more outré styles, embellished with pony hair and mink fur-covered vamps. They’re not for everyone, but they go to show that Paraboot is prepared to have fun—and that is the crux of the brand’s enduring popularity. Pushing the boat out while respecting heritage: It’s a winning recipe for the future for menswear. That said, “hype” and “classic” are words you just might start hearing together more often.