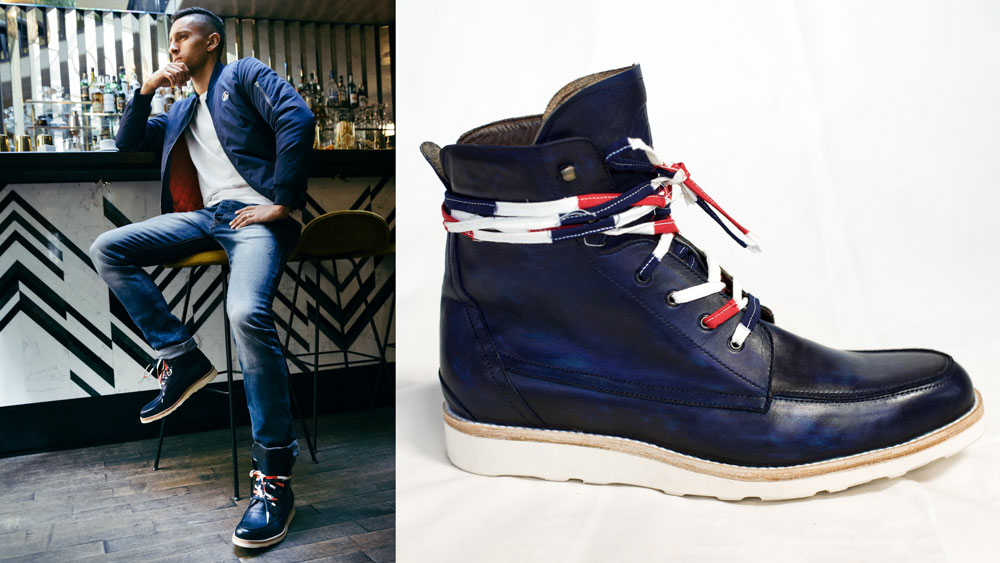 Fresh off the heels of inking a €600 million (about $706 million USD) deal with Brazilian striker Neymar da Silva Santos Júnior—one of the top players in the world—the juggernaut French soccer club Paris Saint-Germain (PSG) is gearing up for one of its biggest seasons to date. Now, the team’s well-heeled fans can get in on the action, as the 2018 World Cup favorite has teamed up with footwear designer George Esquivel to launch a capsule collection of shoes.

The highlight of the collection is the navy leather Elkhart boots ($1,050), which feature red, white, and blue laces—the colors of the PSG uniform and, of course, the French flag. Esquivel designed the inky-blue style modeled here by the team’s star Brazilian defender, Marcos Aoás Corrêa—known to the world as simply Marquinhos—with the legacy of great Parisian artisans in mind, like heritage trunk maker Moynat, expertly combining classic French craftsmanship with the aesthetic of modern American street style. The mix of the two has so far proved to be an instant hit; the 10 limited-edition Elkharts that dropped in May sold out instantly, a teaser of what’s to come.

The full collection will hit Paris Saint-Germain stores and Esquivel Shoes this week and will be available at A’maree’s in Newport Beach, Calif., later this month. If the richly patinated boots aren’t your style, other designs on the roster include slick, white-suede double monk straps and white-suede desert boots. Time to lace up.