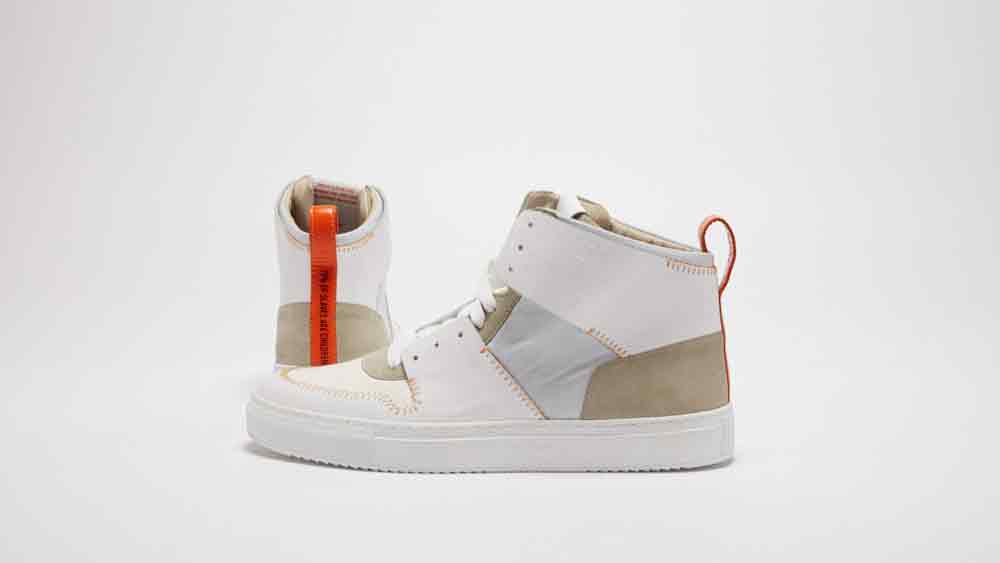 The streetwear craze has officially reached a new height: Phillips, the revered auction house known for dealing in Rothko’s and Basquiat’s is adding the likes of Nike and Adidas to its catalog. Phillips’ New York headquarters is hosting an exhibition titled “Tongue + Chic” through August 31st, bringing an array of highly-coveted kicks into its hallowed halls. Naturally, these aren’t your standard Air-Force 1’s—the exhibition is comprised of twenty pairs of sneakers that have been painted, sculpted and stitched by various contemporary artists and designers. Given the fevered demand for specialty sneakers in recent years—from Yeezy’s to Balenciaga’s Triple-S—seeing them displayed by an art world powerhouse isn’t, perhaps, all that surprising.

“This area has grown from a somewhat niche collecting category to a full-blown cultural phenomenon,” says Arnold Lehman, Phillips’ Senior Adviser and one of Tongue + Chic’s co-curators, “with the objects transcending their original utilitarian purpose to serve as status symbols, political commentary and even works of art in and of themselves.”

Typically, collectors—or sneaker heads as they call themselves—do the bulk of their procurements in an environment that couldn’t be further from your typical auction. They brave the elements, camping out overnight in hundreds-deep lines to snap up a new “drop,” scouring online marketplaces (often entering into dizzying bidding wars on eBay or luxury consigner Grailed), and hitting the ground at conventions like Sneaker Con, which brought over 19,000 people to New York’s Javits Center last year. Of course, none of this come close to the tony ambiance at Phillips’ usual soirees, with their bottomless supplies of champagne and abundant air-kissing—despite the fact that some pairs fetch prices into the tens of thousands. Of today’s sneaker aficionados, Lehman observes: “Those who are acquiring these shoes are extremely passionate and knowledgeable, building their collections with a great deal of thought and intent. This field can certainly be compared to the art market.”

But don’t start getting your paddle ready just yet — only one of the pairs included in Tongue + Chic will be auctioned off. The aforementioned pair was created by Shoe Surgeon, an esteemed sneaker customizer, in collaboration with the Thompson Reuters Foundation, which works to eradicate slavery. The bespoke shoes are subtly embellished with facts about modern slavery, hidden on the tongue and pull-tabs, and all of the proceeds (bidding starts at $5,000) will be donated to the Thompson Reuters Foundation.

Still, the rest of the shoes on display are a must-see for sneaker enthusiasts and art lovers alike. Highlights include two pairs featuring hand-drawn imagery by Shantell Martin, Pumas rendered in a textile designed by Kehinde Wiley, and Air-Force 1’s with soles sculpted in the likeness of Barack Obama by Jimm Lasser. Each pair proves that sneakers are more than just shoes, but instead are a canvas for creativity. “We are increasingly relying on fashion to express our individuality,” says Elizabeth Semmelhack, Senior Curator at the Bata Shoe Museum and the exhibition’s co-curator. “Sneakers, with their deep cultural history yet constantly updated and cutting-edge design, allow wearers to make very nuanced statements of self through the sneakers they choose.”