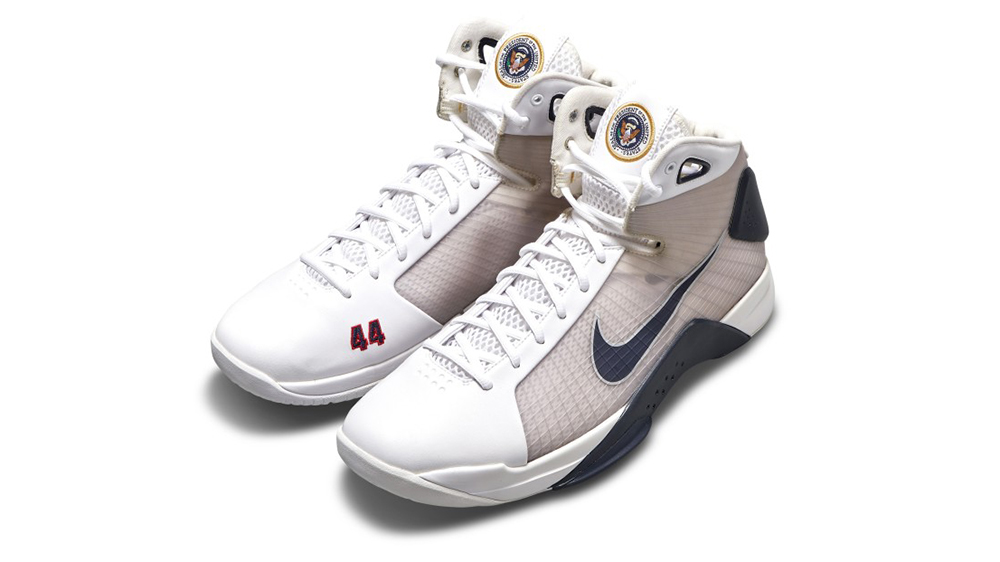 Sneakerheads are always on the lookout for a pair of rare kicks. And they don’t come much more exclusive than a pair made for former President Barack Obama.

On Friday, a pair of Nike Hyperdunk basketball shoes custom made for No. 44 in 2009 are going up for sale on Sotheby’s Buy Now platform, just in time for President’s Day. But you don’t need to read the documentation to know that were meant for the erstwhile Commander-in-Chief, as they feature a number of design flourishes that make it abundantly clear who they belonged to.

If you’ve ever wondered what kind of basketball sneaker Obama favors, the answer is a classic high-top with plenty of ankle support. This specific pair, size 12.5, is based on the “United We Rise” Hyperdunks that the Team USA wore at the 2008 Summer Olympics in Beijing. They feature a white leather upper, visible Flywire technology and dark blue accents, including Nike’s iconic swoosh. The shoes also feature a number of Presidential details, including a red and blue “44” embroidered on the medial side of both toes, an insole with patriotic imagery and the date “1776.” On both tongues, you’ll find the official Seal of the President of the United States.

While being president comes with all manner of perks, it should come as no surprise that Nike made a pair of basketball sneakers specifically for Obama. The former president, who helped lead his high school to the Hawaii state championship in 1979 when he was a senior, has never hidden his passion for the game. In fact, during his time in office, he had the White House’s tennis court converted into a full-sized basketball court. And on his 49th birthday, greats of the game both past and present, like Magic Johnson, LeBron James and Chris Paul, were invited to play in what might be history’s most star-studded pickup game.

Obama’s custom-made Hyperdunks will drop at 4:44 pm EST on Friday, February 12 (the time honors his place as the 44th president). The pair is only one of two known to exist and thus carries an appropriately high $25,000 price tag to match.