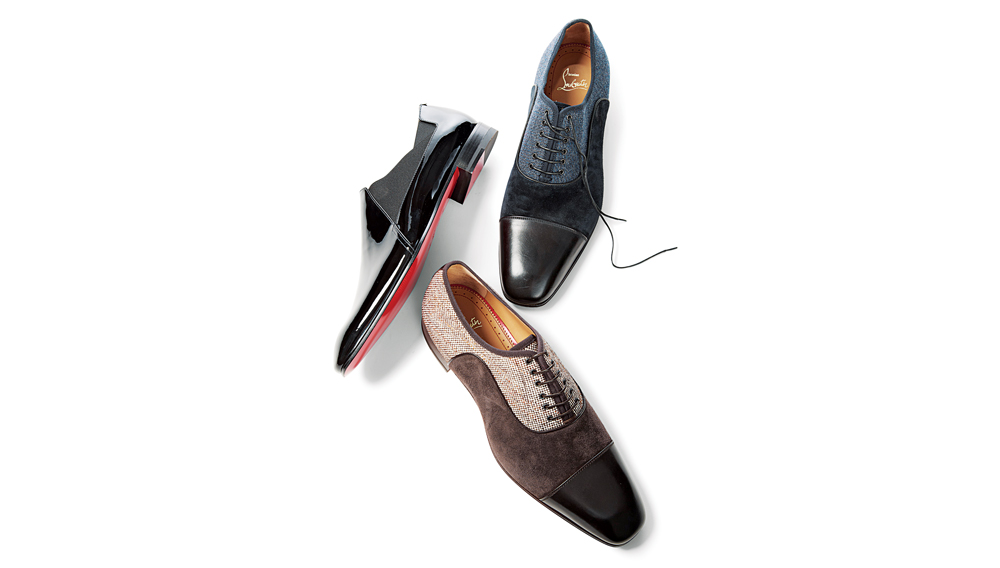 Fashionable women worldwide know Christian Louboutin. The French designer’s sexy sti­lettos, adorned with his trademark red-­lacquered soles, are expertly collected and widely coveted. Less known, perhaps, is Louboutin’s own penchant for collecting: His assemblage numbers nearly 400 pairs of men’s shoes, which he stores in his homes in Paris, Lisbon, and Cairo. “I organize them by style, such as spiked, embroidered, black sneakers, and other sneakers,” says the 52-​year-old, who has two pairs of some of his favorite models so as not to wear them out.

Louboutin’s personal affinity for footwear has recently translated into his brand’s broader collection for fall, a lineup that includes his men’s bench-made dress shoes. Referred to as “city shoes” by their creator, the collection’s latest dress styles are the fruits of a small workshop outside Naples, Italy, which employs about 50 artisans, many of whom are second- and third-­generation cobblers. Over the past year, Louboutin has spent countless hours working alongside the shoemakers to ensure that the new models reflect his intended aesthetic—classic shapes with eye-catching refinements, such as grosgrain, patent leather, and colorful trim—but also provide a comfortable fit. Next year, he says, he will offer made-to-measure dress shoes in a few of his namesake men’s shops.

“You shape dress shoes like [you shape] a car; it is about proportion, balance, and the polish is very important,” says Loubou­tin. “Men’s dress shoes are also like a pure design form that can stand alone.” The designer’s passion for craft and attention to detail are on display in new models like the Derby, a simple silhouette with a subtle chain-link border, and in his lace-up Napoli flat—first introduced in 2013 but updated last year—with a buckle at the throat. In addition to such dress styles, Louboutin continues to produce a fanciful collection of spiked, beaded, and velvet sneakers for the enthusiasts who collect his casual shoes.

His fan base has been growing since 2010, when he unveiled his first men’s collection, and a few years ago he started embroidering men’s personal tattoos on loafers. “Tattoos are like a map of a man’s life,” he says. The associates at Louboutin’s boutiques take photos of a client’s tattoos, which are then replicated on the client’s choice of velvet or leather loafer. “It’s all about the feet right now,” he adds. “Men are showing their point of difference in their shoes.” For the Louboutin man, such distinction starts with dress shoes bearing the same red-lacquered soles that made the designer’s stilettos high-style symbols.