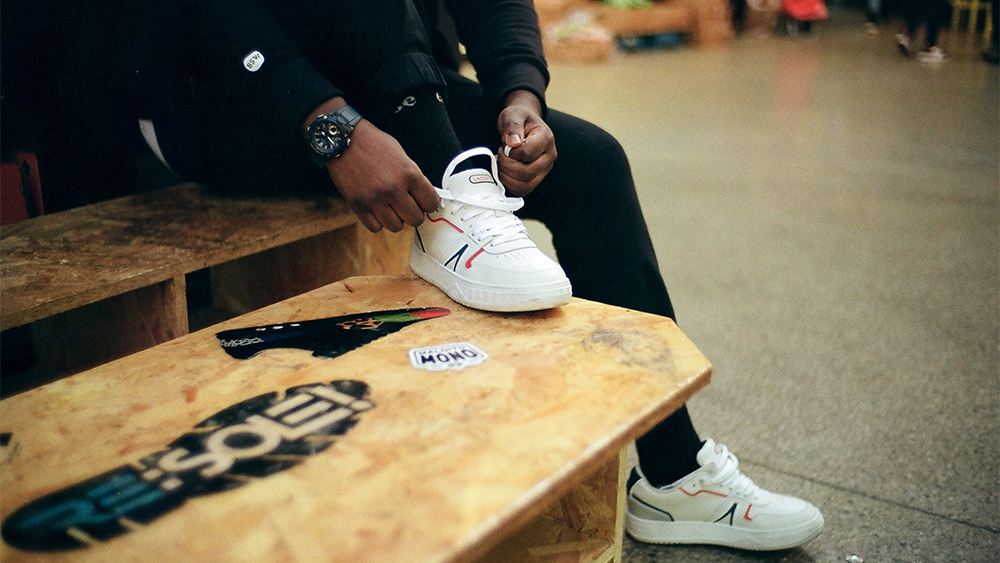 The sneaker industry is expected to be worth $100 billion by 2025. It’s one of the fashion world’s most lucrative and fastest-growing sectors, and thanks to hype culture and the internet, it shows no sign of slowing down. Despite their boom, sneakers are not as accessible as one might think. In the UK alone, it’s estimated that 15 million people are living in poverty, while the Combined Homelessness and Information Network found that over 11,000 people were sleeping on the streets as of March 2021. For these communities, sneakers—something most of us take for granted—are an unattainable luxury.

Following conversations he had with unhoused people in London, Moosa Nsubuga started thinking about ways he could help. And two years ago, he founded Re:Sole, a nonprofit that redistributes unwanted footwear to the unhoused, unaccompanied refugee minors, ex-offenders, orphans and low-income families in cities throughout the UK. “It’s important to have conversations with people, rather than tell them what we think they need. One guy told me that whenever he goes to sleep at night, his shoes often get stolen by someone else who’s homeless and hasn’t got a good pair. He told me, ‘If you can help me with some shoes, that would be great.’ So I took down a bunch of sneakers along with some friends, and two years later we’re here.”

Nsubuga decided to focus on sneakers largely because of their comfort and practicality, but also for less obviously pragmatic reasons. “Shoes do something that clothing can’t,” he says. “If you’ve got a good pair of shoes on, they make you feel better. They can offer a different level of confidence and self-esteem,” Nsubuga says, noting that this is something he sees firsthand all the time. “We’re in the business of retail therapy. We aim to make people who don’t have money feel good. A lot of us have the freedom to do a bit of retail therapy…to buy things we don’t need but that make us feel good at the time. Whereas the individuals we work with actually need these things and they don’t have the money [to buy them].”

Each pair is donated directly to Re:Sole, either in the form of unsold sneakers from brands including Adidas and Nike or by individuals handing over their unwanted pairs. Regardless of the state of the sneakers, the organization ensures that each pair leaves its headquarters looking brand new—they’re meticulously cleaned and repackaged on-site, where Nsubuga is keen on reminding volunteers that “they have to be good enough for you to want to wear them yourself.” So far, he’s received everything from Nike Air VaporMaxs to Jordans and Adidas Superstars.

Volunteers collecting and cleaning sneakers to be distributed to people in need.  Re:Sole

The sneaker industry earns a lot of people a lot of money, but it could be argued that the big corporations don’t give back as much as they could. According to the US Department of the Interior, 300 million pairs of shoes are wasted every year. Rather than be re-used or donated to those in need, they end up in landfill. More than 23 billion pairs of shoes are made every year (a large percentage of which are sneakers); that is more than three times the amount needed for the planet’s 7.7 billion population, which might explain why so many go unsold.

“The brands are listening,” says Nsubuga, “but how much they actually do isn’t too clear.” What is certain, however, is “there’s a lot more demand than what [Re:Sole] can offer.” Moosa and his team hope to secure more funding to reach more people, both in the UK and farther afield. But, for now, they continue to help as many as they can, taking donations both in person at their Brixton outpost and online, so far raising and donating over £1 million worth of sneakers. His advice for anyone looking to make a change of their own? “You can’t solve every issue, but pick one, do it well and you’ve got a good chance.”