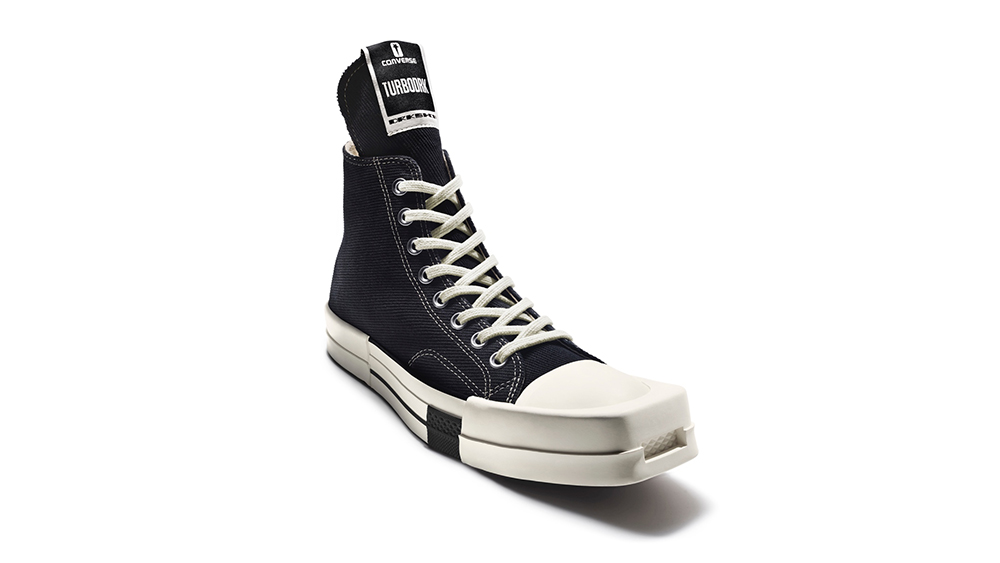 Rick Owens—the avant-garde American fashion designer—is known for challenging conventional silhouettes and his uncanny ability to make the classics feel fresh. So it’s no surprise that his collaboration with Converse does both.

These sneakers, which debuted during Owens’s fall 2021 fashion show, are based on his popular Ramones sneaker silhouette and marry its sculptural form with the time-tested lines of the Chuck Taylor 70. The resulting shoe, aptly named the TURBODRK Chuck 70, is offered in a black-and-white or all-white colorway and is characterized by a square toe cap and an extended tongue.

Other features of the shoe include luxurious canvas uppers, silver-tone eyelets, cream-colored laces and a co-branded label found on the insoles, tongue and rear license plate of the shoe. Given Owens’s penchant for twisting wardrobe staples into something completely new, it’s a fairly restrained update on the iconic shoe design.

“When I see something ubiquitous, I feel like I want to distort it. I don’t know what that’s about,” the designer said in a statement. “Maybe it’s some kind of adolescent rage. But that’s one of the greatest appeals of the Chuck Taylor All Star.”

This is far from Owens’s first time at the collaboration rodeo—in fact, his partnerships are one of the most important vectors of his popularity. The results of his sporadic team-ups with Adidas, Birkenstock, Champion have become highly coveted pieces. The recent success of his partnership with Moncler is a testament to his appeal beyond his core customer.

The Rick Owens DRKSHDW x Converse TURBODRK Chuck 70 will reportedly be priced around $170 and will debut in unisex sizing later this year. If you’re interested in getting a pair—or, more importantly, getting a pair before the rest of the hypebeasts in your life do—Converse is giving early access to a select few who text “DRKSHDW” to 75140.